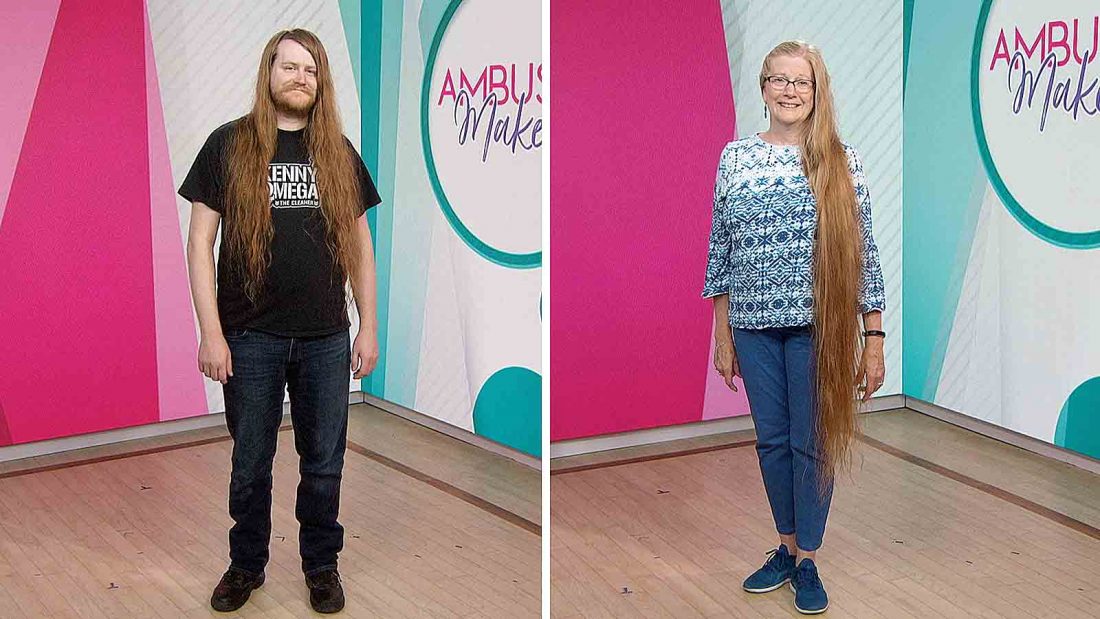 Coolville residents Aaron “Doc” Springer, left, and his mother, Cindy, are shown before the Sept. 5 “Ambush Makeover” segment in which they participated on “The Today Show.” (Photo Provided)

PARKERSBURG — For many people, getting a haircut is a fairly regular activity, with a quick trip to the local salon or barber shop.

For Coolville resident Cindy Springer and her son, Aaron “Doc” Springer, it was a matter of years and a flight to New York.

The duo appeared Sept. 5 on the fourth hour of “The Today Show” in an “Ambush Makeover” segment, where their lengthy locks were cut and styled under the guidance of celebrity hairstylist Louis Licari and their wardrobes given an update from “Today” lifestyle contributor Jill Martin. They were nominated by Cindy’s sister, Kim Orlemann of Cincinnati.

“I have two sisters, and they both thought it’d probably be time to get my hair cut,” said Cindy Springer, who recently retired from a job with the federal government. “But it had to be time for me. What an opportunity to go to New York City and have someone famous do your hair.”

Before last week, Cindy’s hair hung below her knees. It hadn’t been cut beyond a simple trim in 45 years, two years before she married her husband, Ron. 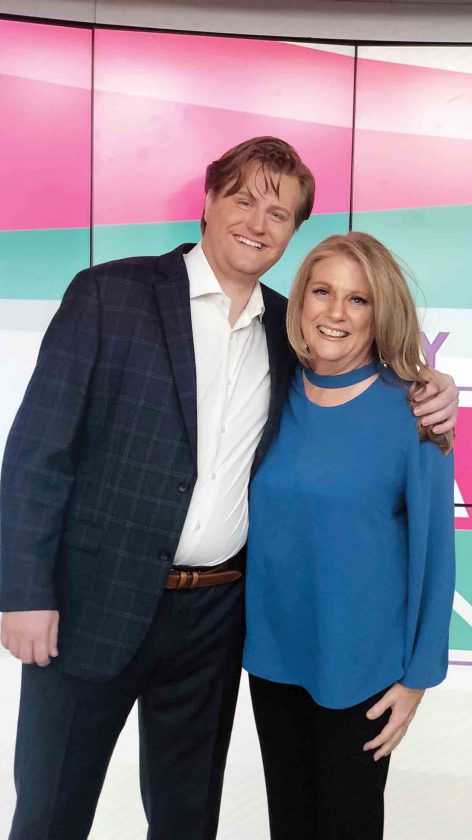 Coolville residents Aaron “Doc” Springer, left, and his mother, Cindy, are shown after receiving their makeovers on the Sept. 5 episode of “The Today Show.” (Photo Provided)

“As much as anything, it was probably just a habit,” she said.

Doc moved back to the area from Pittsburgh five-and-a-half years ago to concentrate on building his artistic portfolio. He had a regular barber there but never picked one here.

“I stopped getting it cut maybe six months before I left Pittsburgh,” he said.

Orlemann said she’s been trying to shine a spotlight on her sister’s signature hair and set up a makeover for years, sending submissions to the likes of the Ellen DeGeneres, Steve Harvey and Oprah Winfrey shows. When she saw “Today” was looking for entries, she sent in pictures of Cindy and herself.

While producers agreed Cindy would be a great candidate for a makeover, the potential change for Orlemann didn’t seem as dramatic. During a visit, Orlemann broached the subject with her nephew. 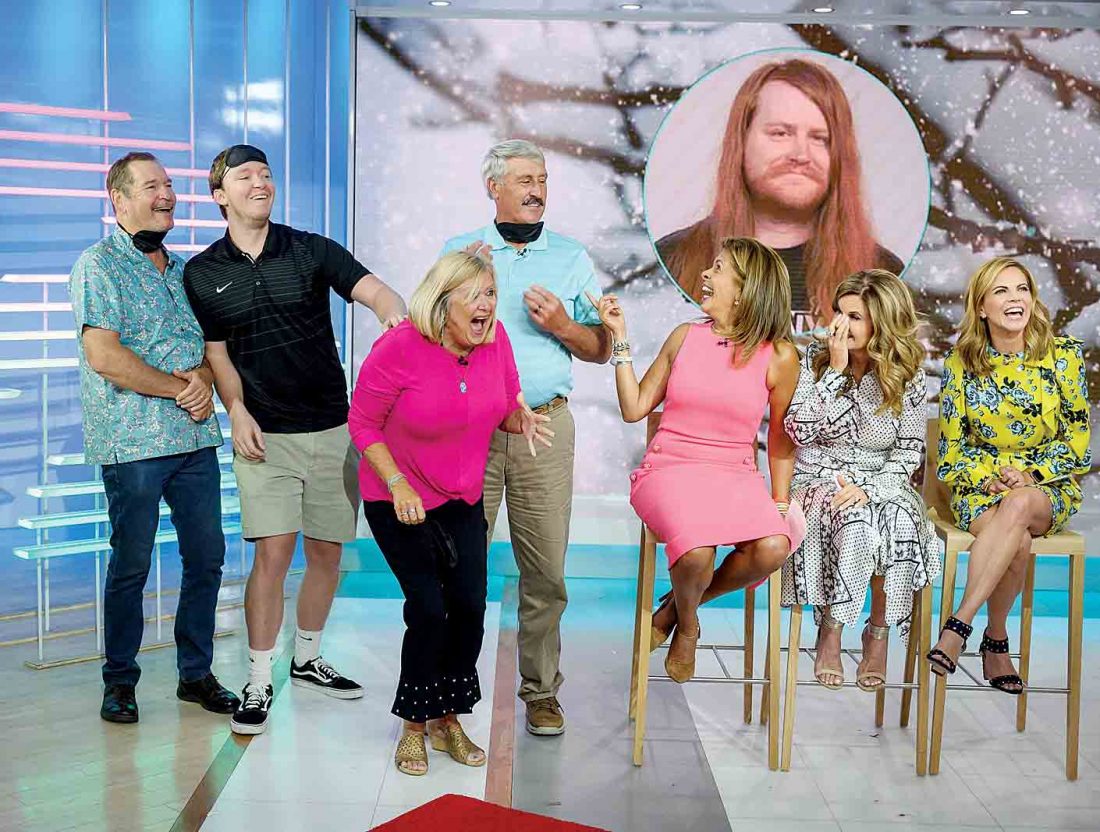 “I didn’t think he’d be interested,” she said. But when Doc said he’d be open to it, “I immediately snapped pictures of him and sent them. And within half an hour (a producer) said, ‘You’re in.'”

Orlemann got Cindy and Doc to come to her Cincinnati home last week, ostensibly for a Skype interview with producers as finalists to be on the show. In fact, it was already in the bag, and “Today’s” Donna “Donnadorable” Farizan was en route with a camera crew to spring the surprise.

They flew out early Sept. 3 and saw some sights before Doc was taken to Men’s Wearhouse to find clothing for the following day’s broadcast. They arrived at 7 a.m. Sept 4 to begin the makeover process.

After getting her hair cut, Cindy tried on a few outfits, with the blue top and black slacks she ended up wearing selected in an online vote.

Doc said mirrors backstage were covered and the crew tried to get them to focus on specific objects as they walked so they wouldn’t catch an early glimpse of themselves in a reflective surface. They were kept separate from each other as well, to preserve the element of surprise when the transformations were revealed.

“I think he looks like that actor, Jeff Daniels,” Orlemann said in a phone interview.

Doc said the experience was surreal.

“You walk out there, and then there’s just like cameras everywhere,” he said.

After taking in his new look — “I was thinking it looked pretty good” — he joined his family as his mother walked out from backstage.

“I knew from everybody’s reaction that I must have looked pretty different,” Cindy said. “But I knew I would.”

Rather than think about being on national TV, Cindy said she focused on finding Doc and seeing her husband’s reaction.

“I could tell they were looking for more out of Dad, but he’s a man of few words,” Doc said.

As for seeing his mom for the first time with shorter but still long and full hair, “I was kind of blown away,” Doc said. “She didn’t look like herself at all.”

Cindy liked her son’s results too.

“I think it showed how handsome he is,” Cindy said. “I knew how good he looked under that hair.”

Cindy and Doc donated their hair to Wigs for Kids, which Cindy said does not charge cancer patients for wigs.

Both said they like their new looks and plan on maintaining them, though Doc may grow back his beard.

“It feels very different, but not in a bad way,” Cindy said. “It is a lot lighter.”

“If you’re going to do it, you might as well do it in the right way,” Doc said.

Evan Bevins can be reached at ebevins@newsandsentinel.com