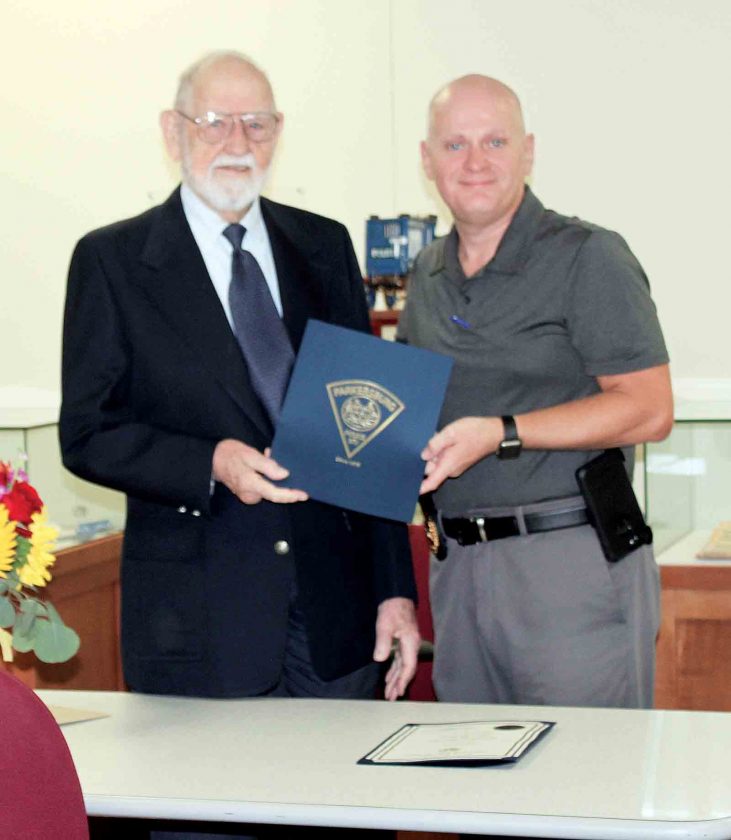 Capt. Scott Elliott presents an award to Lou Bodgan for his years of volunteer service for the Parkersburg Police Department.

PARKERSBURG — A 99-year-old resident of the community was recognized Tuesday for his 40 years of volunteer service by the Mid-Ohio Valley Regional Council and the Parkersburg Police Department.

Lou Bogdan was presented a Certificate of Appreciation and a message from Gov. Jim Justice that said he was receiving the award “for outstanding commitment to volunteerism and exceptional contributions toward making West Virginia a better place. Volunteers are not just the heart of activities, they are the heart of each community.”

Bogdan also received an award from the Parkersburg Police Department for his dedication over the years. According to a press release written by Anne McFee, a former Retired Senior Volunteer Program director, Bogdan would help prepare payroll for the office and described the Police Department as a “second home” for him.

After the passing of his wife, Bogdan decided to find something to do to fill his time. He began work with RSVP, a program of the Regional Council. A few ways he has served the community are by offering Volunteer Income Tax Preparation, cooking meals and providing recipes for friends and family.

“(Lou) is an amazing individual. (He’s) super intelligent, he’s up to date with all the latest technology,” Carol Jackson, executive director of the Regional Council, said. “He’s just an amazing person.”

After receiving the certificates, Bogdan reflected on his years of service.

“If you stop and think ‘why are we on the face of the Earth, each and every one of us?’ We’re here to help our fellow man,” he said.

He shared his perspective on the concept of giving. “The only way we can progress as a person or people is by giving,” he said.

Bogdan said giving is among the hardest tasks to do. “As soon as you do something for someone else, they immediately want to thank you and the only way you can give, truly, is to give and walk away and not wait around for the thanks. By waiting around for the thanks, you have turned the wonderful thought of giving into a simple business transaction. That’s really not giving in the true sense of the word.”

He talked about different qualities in human beings that are passed down from older generations. He shared many lessons that were instilled in him by his father. One of them was the concept of setting aside money. Each week, his mother set aside a half dollar which, over the years, paid for a total of 19 years’ worth of college for Bogdan and his siblings.

It was thanks to this practice that Bogdan “had the honor of being one of the first three individuals of the United States to be recruited to do jet engine research back in 1942.”

He said “the upbringing has an awful lot to do with how you end up.”

Bogdan gave a few pieces of advice for the group. “If somebody gives you a problem that you can solve, help them.” He said that by helping someone, “you have educated them because now they are smarter than they were before the problem was solved. You made that other individual a better person because of it.”