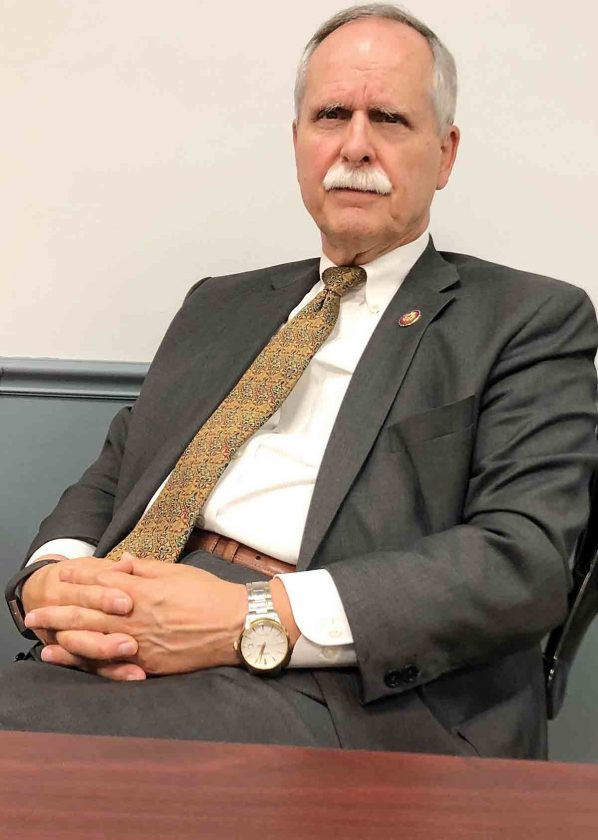 U.S. Congressman David McKinley, R-W.Va., was in the area on Wednesday to meet with a variety of people on different issues as well as attend the Grand Opening ceremony for the new Hino plant in Mineral Wells. He discussed energy development, efforts by some to impeach U.S. President Donald Trump, human trafficking, Red Flag gun laws and Greenland are some of the topics he said are being talked about in Washington D.C. (Photo by Brett Dunlap)

Rep. David McKinley, R-1st, was in Parkersburg Wednesday to meet with constituents including attending the grand opening ceremony of the Hino plant in Parkersburg.

When lawmakers return after the break, there will be renewed efforts to impeach the president, which he said is being done to bolster 2020 campaigns for re-election, he said.

”I am not sure that is in the best interest,” McKinley said. ”It is going to distract from other legislation we need to get done.

However, McKinley doesn’t believe the impeachment process will be successful.

“I think (House Speaker Nancy) Pelosi knows that. Even if they get the votes to pass it out of the House, they know it will die in the Senate,” Mckinley said. “There are so many other things that we need to work on.”

McKinley met with representatives of the Willow Island Power Plant in Pleasants County about the challenges it faces in the marketplace. The coal-powered plant is dealing with rules implemented under the Obama administration, some undone by the Trump administration and the others requiring legislative changes, McKinley said.

McKinley is working on trying to “level the playing field.”

”We need to give others a chance to bid in and give them a way that allows them to sell electricity,” he said.

A movement is underway in Congress by 50 Democratic progressive members who want to see the U.S. go to 100 percent renewables in 10 years. The leadership has revised that to be at 100 percent by 2050. Hearings are scheduled in the House.

McKinley does not believe it is possible in 10-30 years. Airplanes and automobiles are included, he said.

”The technology is not there yet to make it viable,” McKinley said. ”It will be decades away before they have the battery capacity needed.”

”It is a nice idea, but it is going to be hard to get there,” McKinley said. ”We need to continue to burn our gas, our coal and our fossil fuels as cleanly as we can. We need to keep people employed and keep doing the research.”

As far as the president’s desire to want to purchase Greenland, McKinley said he does not know what is happening there.

”Ask him,” McKinley said with a chuckle.

He did say that throughout history people thought American leaders were crazy when they did the Louisiana Purchase from France and the purchase of Alaska from Russia.

”It had to start someplace,” McKinley said. ”It is not without precedent. I just don’t understand it yet.”

He said it might have something to do with the availability of natural resources.

With recent mass shootings and calls for legislative action, the president initially said he was in favor of more detailed background checks. However, he has since backed off, saying the country already had a good background check system in place.

McKinley said he believes the president is coming to understand the nuances and implications of it. There could be instances where someone on a hunting trip who lets another person use their gun could be charged with a federal crime.

”Let’s have some adult conversations about this,” he said.

McKinley said he is open to the idea of red flag laws where people determined as a danger to themselves or others to be a basis for having their guns removed, but wants more information before committing to anything.

”I want to understand it more,” he said. ”I am not going to jump out there and lead a charge.”

He wants to know what it will entail in regards to the rights of the individual.

If there was a situation where someone is a threat to someone or themselves because of mental anguish and to have a gun taken away would mean that person has expressed that they could harm themselves.

However, there would need to be something in place where if a person gets help or it is determined they are no longer a threat to themselves or anyone, they can petition to get their guns back, McKinley said.

”Those are the things we need to work through to make sure their civil rights and their legal rights are met,” he said. ”They also need to have the right to get it back if those threats aren’t valid or overcome.”

He said many states already have red flag laws in place. States need to take the lead, McKinley said.

Gaps in border security have allowed drugs to come into the United States as well as an influx of human trafficking. McKinley did not mention migrants or their families being held in facilities near the border.

”We need to get control over the border,” such as a wall, fencing or monitoring drones, he said. ”There are things that can be done where we can get control so we don’t have these (people) coming in with drugs.”

McKinley said there are people in Congress who don’t want any border security.

The gaps in border security has also allowed an increase in human sex trafficking into the United States.

Lawmakers talked with people who got away. In testimony, they were told young girls are stolen from their families in Central America and have their families threatened if they try to escape. Many comply because they believe they are protecting their family.

”It is scary,” McKinley said.

Although some escaped or were caught when trying to enter the country, McKinley said he is not sure if their families were harmed.

”There are currently 42 million people in slavery worldwide,” he said. ”There were 9,000 young girls who were saved last year who were being brought across the border to be sold into slavery.

”We need to try and stop it at the border.”