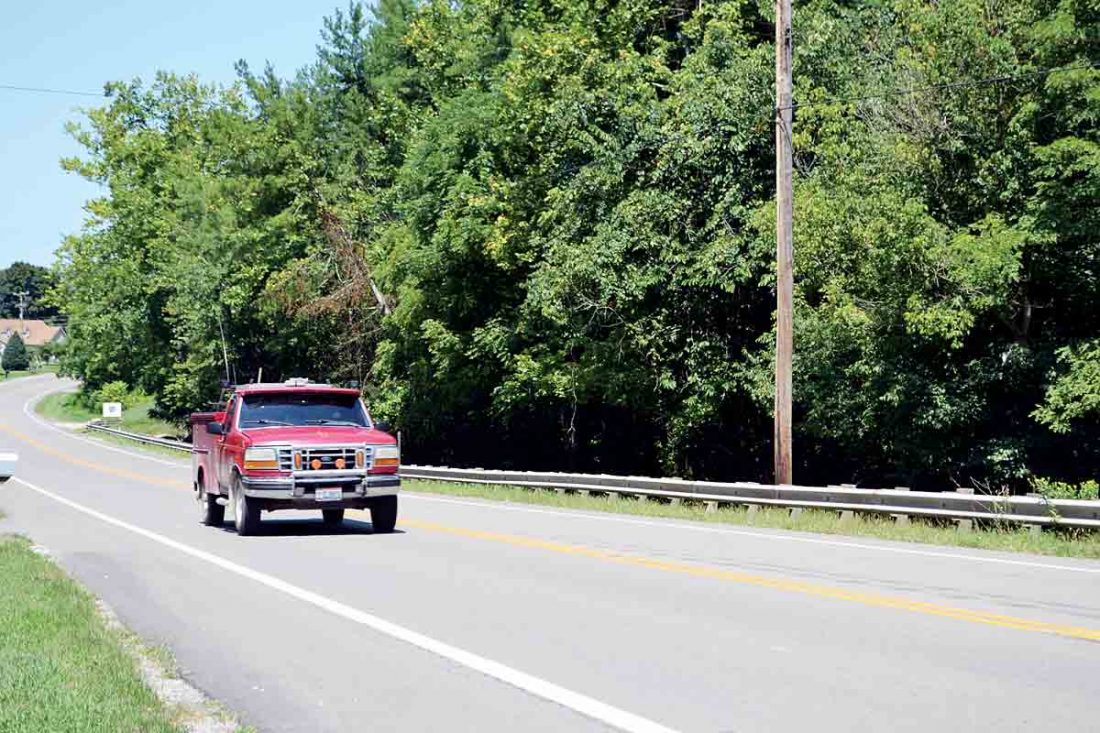 Rumble stripes will be added to the center line of Ohio 60 from just north of Devola to just south of McConnelsville. (Photo by Michele Newbanks)

MARIETTA — The Ohio Department of Transportation will add centerline rumble stripes to sections of Ohio 60, following a number of fatal accidents.

Weather permitting, the work will begin on Tuesday, and will be a rolling operation through the center of the section of road they are working on that day.

“It won’t be a full road closure for a long period of time,” Bruning said. “It’ll hopefully be done within those three days.”

He said the rumble stripes will not be added to the sections of road through the villages.

“One thing about rumble stripes that people don’t like is they are loud. When they are in areas where there are people who live there, that’s one of the complaints we get. But when you consider the fact that we’ve had a number of fatalities, you have to strike that balance,” he said.

The stripes will be installed from mile markers 3 to 13 in Washington County and 11 miles in Morgan County, which is about couple of miles south of McConnelsville to just north of Devola.

According to the Federal Highway Administration, rumble strips are an effective countermeasure for reducing roadway departure crashes. The noise and vibration produced by rumble strips alert drivers when they leave the traveled way. Rumble stripes is the term used for rumble strips painted with a retroreflective coating to increase the visibility of the pavement edge at night and during inclement weather conditions.

“You probably have seen the edgeline stripes along Interstate 77. We wouldn’t do centerline on the interstate, as that wouldn’t make much sense,” Bruning said. “But on a two-lane, in certain locations, it makes sense to use this, to catch people’s attention, especially if you’ve had crossover crashes.”

He said the Ohio State Highway Patrol noticed the issue of crossover crashes along Ohio 60 and brought it to ODOT’s attention.

“I know there were 30 left-of-center crashes between 2014 and 2018. Two of them were deadly. If you’re counting Morgan County, there would be two more. There were two more fatalities this year in Washington County,” said Sgt. Garic Warner of the Ohio State Highway Patrol.

Warner said the highway patrol has seen an uptick in arrests for people operating a vehicle under the influence.

“OVI has always been an issue, but now we’re seeing distracted driving which draws people left of center and now drugged driving as well. What you’re seeing is where typically OVIs used to be at night or on weekends and you knew when they were going to happen. Now you have drugged drivers at 10 a.m. on a Tuesday morning,” he said. “You’ll catch them at different times of the day now impaired. It’s totally changed the game. That’s why we reached out with ODOT. We really need some extra help, especially in that area. It’s just been bad for a while now.”

He said people driving under the influence of heroin and methamphetamine has been a recent problem.

“(Ohio and West Virginia) are two of the worst states and we’re right on the border of it. So it’s a problem. We’ve got to start thinking outside the box. Using #677 is where people can help. Call us if they see anyone that might be an impaired driver,” Warner said. “We don’t have the troopers to just put them out there to catch impaired drivers. That’s why we reached out with ODOT. They’ve got some great ideas to help us. So this is one of them.”

He said the idea of rumble striping is to catch the driver’s attention.

Eric Davis, traffic engineer with ODOT, said the job will cost approximately $40,000, which includes the road grinding and rumble stripe, as well as materials for the striping, but not the labor cost.

“A contractor will do the grinding and our crews will do the traffic control while the work is being performed and will re-stripe after the grinding. As I understand, they can grind about a mile an hour,” Davis said.

Although part of Ohio 60 is still shut down north of Devola due to the landslide this past spring, Davis doesn’t see any issues.

“I don’t think it’ll be an issue with grinding,” he said. “With the striping, we have to stripe in both directions, so the center line through that work zone, we’ll just get it one direction until the work is done.”

“It won’t be completely closed, you won’t have to detour, but you’ll probably see some delays as you’re working around the flaggers,” he said

He said people should slow down and pay attention when road crews are out working.

“Our crews were struck 200 times last year. It’s ridiculous. A lot of it also goes back to what the sergeant here has said about distractions and impairments, but also, we have people, for whatever reason, they’re just not paying attention,” he said. “They’re in a hurry and just want to get by our work crews and that’s when we have problems.”

Bruning said these centerline rumble stripes have been a big help on Ohio 93 in Vinton County.

“In 2015, ODOT installed centerline rumble stripes after a rash of three deadly crashes,” he said. “Since they were installed, there have been no fatal crashes on that stretch of roadway.”

Warner said heat maps were used to identify Ohio 60 as a problem area.

“In the past three or four years, we’ve come out with heat maps, so we can go back like a three-year window and have heat maps that show you where the most serious crashes are,” he said. “Those have been most helpful to us. Again, we have limited resources. We may only have one or two troopers out on a shift, I need to know where to put them. This was one of those places that was always in the red. It’s a bad spot.”

“When you talk about the effectiveness of this, a national stat that came to us from federal highways, they found that the centerline rumble stripes have been able to reduce left of center crashes by about 45 percent. You want to talk about crashes that result in serious injury or death,” he said. “So, they do work, but again, we want to make sure we’re targeting these areas that makes the most sense. We’re investing the money where we know this has been a problem area instead of just widespread. We want to target these resources where we know they will best be effective.”

He said that’s why he appreciates the highway patrol coming to ODOT to say there is an issue and they need help.

“It’s so impressive that these guys can see it on the front line and there’s a way that ODOT can help. It’s really two state agencies working together to make the people of Ohio safer,” he said.