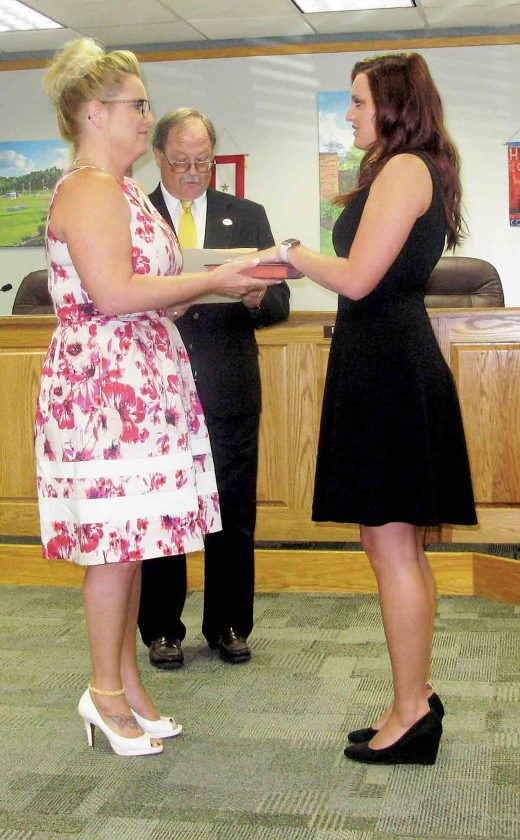 Janine Willhide holds the Bible for her daughter, Allyssa Kern, who is sworn in as a Vienna police officer by Mayor Randy Rapp, who administered the oath of office during a ceremony Monday in city council chambers. Chambers were filled with city officials and members of her family. (Photo by Jess Mancini)

VIENNA — The first female police officer in the city of Vienna was sworn into office on Monday morning.

Allyssa Kern of Williamstown recited the oath while her mother Janine Willhide held the Bible.

Mayor Randy Rapp presided at the ceremony attended by numerous city officials and members of her family.

“I’m very proud to stand beside her,” Rapp said.

Kern, a December 2018 graduate of West Virginia University at Parkersburg with bachelor’s of applied science in criminal justice, will report on Aug. 26 to the West Virginia State Police Academy. She was cited as a Presidential Scholar with a 4.0 average earlier this year.

She is the first female officer in the Vienna Poice Department, Rapp said.

“This is a very special day for the city of Vienna,” Rapp said. “She’ll bring a new dimension to the city we never had.”

Among the qualities of being a police officer is courage, said Police Chief Mike Pifer.

Kern demonstrated she has the courage for taking the oath to become a police officer, he said.

The Vienna Police Department is a 20-officer force. The last swearing in was in February when Derek Pelfry, son of Parkersburg Police Officer John Pelfry, was administered the oath of office.

The responsibilities of being a police officer are many and the stress is more than “we as normal people can’t comprehend,” Rapp said.

But Kern, like other officers, has the department at her side, according to Rapp.

“You will not be alone,” Rapp said.