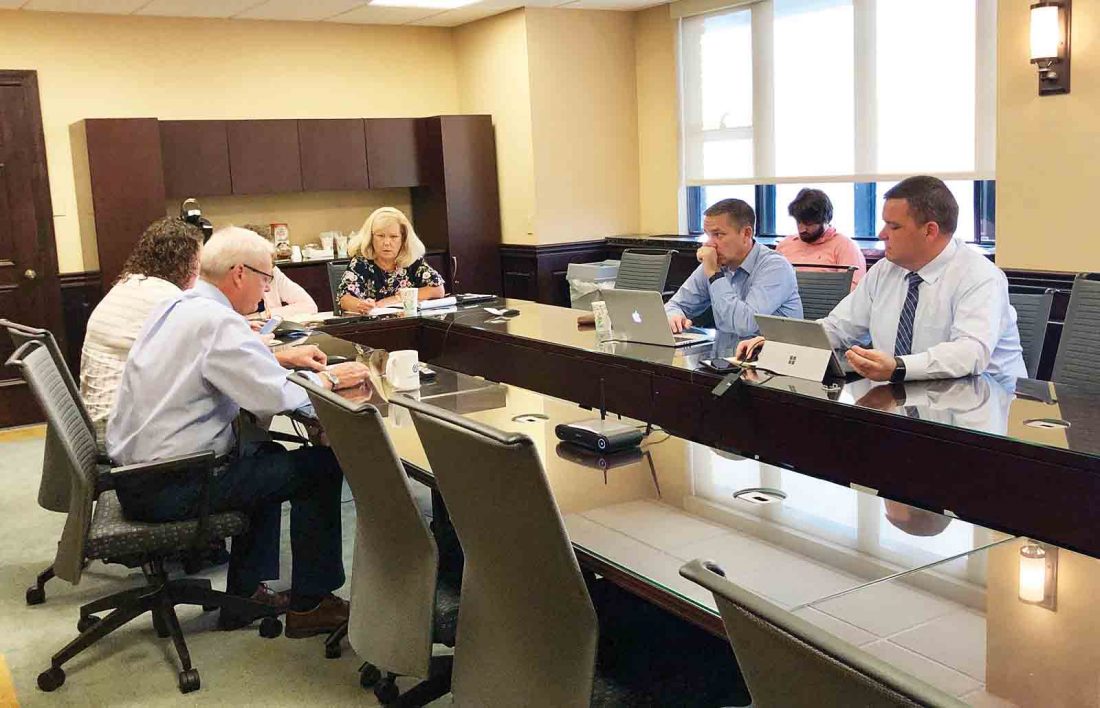 Staff with the Higher Education Policy Commission listen in to a conference call as commissioners approve the annual reauthorization for Wheeling University. (Photo by Steven Allen Adams)

CHARLESTON — The West Virginia Higher Education Policy Commission approved the annual reauthorization of Wheeling University to confer degrees Friday after a two-week postponement, but the school will have conditions and deadlines to meet if it hopes to stay authorized over the next 10 months.

In a special meeting held by conference call Friday at its Charleston offices, the commission unanimously approved Wheeling University, formerly Wheeling Jesuit University, for its annual reauthorization effective until May 22.

“We really appreciate the fact that you took the action that you took, and you came to spend some time with us,” said Ginny Favede, chairwoman of the Wheeling University Board of Trustees, speaking by phone from Wheeling to the commissioners. “I think that nothing but good will come from this.”

The commission is required by state code to authorize all degree-granting institutions, public or private, in West Virginia. Reauthorization is granted on an annual basis as long as the college or university can demonstrate it is following all commission guidelines.

The reauthorization comes with several catches.

Wheeling University must abide by a series of conditions and deadlines. These include coming up with a viable teach-out plan for terminated academic plans by Aug. 23. The university must come up with plans in case the school has to close by Sept. 13, submit a report on how it plans to remain financially viable over a five-year period by Oct. 18, and submit reports on finances and enrollment projections for the spring semester by Nov. 22.

“Absolutely, without a doubt,” Favede said. “I think it gives us a constructive timeframe in order to meet those milestones. And I think that our actions over the past two weeks are evidence that we are more than willing to work towards those.”

Commissioners were set to reauthorize Wheeling University on Aug. 2, but a late submission of required documents the night before, plus the last-minute announcement the morning before the commission meeting that Wheeling University President Michael Mihalyo and Senior Vice President Joseph Petrella were placed on paid administrative leave led to the decision being postponed.

On this past Tuesday and Wednesday, commission Chancellor Sarah Tucker, Vice Chancellor for Academic Affairs Corley Dennison and a team of commission staff held a site visit at Wheeling University. Dennison, during Friday’s commission meeting, noted numerous issues at Wheeling University, including a continual deficit at the school over several years, drops in enrollment and staffing and tuition discounts of up to 72 percent.

Dennison said the Diocese of Wheeling-Charleston recently gifted $2 million to the struggling university for this academic year. Matt Turner, executive vice chancellor for administration, said the diocese submitted a letter committing to keep supporting Wheeling University, though they didn’t specify how much money they would continue to spend.

The diocese also purchased the land upon which the university sits. These factors helped convince the inspection team to recommend reauthorization for Wheeling University, though it’s unclear how the university can sustain itself past this school year.

“The institution has demonstrated it can maintain operations for the coming year pending an immediate successful capital campaign or a promise of continued financial support from the diocese or both, coupled with a complete review and restructuring of financial and administrative operations,” Dennison said. “The institution does not currently have the means to sustain past the 2019-2020 academic year.”

With President Michael Mihalyo still an employee and no provisions for an interim president, the university is using a leadership team led by Favede with Jeffrey Strader, vice president of administration and chief financial officer; David Hacker, vice president of human resources and compliance; and Laurie McCullough, director of institutional data and systems.

Wheeling University also is under investigation. The Higher Learning Commission, which accredits degree-granting institutions in 19 states, is looking into a complaint filed against the school regarding its governance issues.

The Higher Learning Commission also is looking at the university’s accreditation. Another investigation, this time by the NCAA as a result of self-reporting from Wheeling University, is looking into the school’s basketball program and booster activity. The commission had no further information.

Michael Farrell, the chairman of the Higher Education Policy Commission, told Favede that the commissioners would like to meet with Bishop Mark Brennan and discuss ways for the commission to help Wheeling University. Gov. Jim Justice and U.S. Rep. David McKinley, R.W.Va., earlier this week expressed support for the university and called on the commission to keep it open.

“You’ve got a lot of folks who want you to succeed and we think we have resources to help you rearrange how things are being done for the benefit of the university,” Farrell said.

Chancellor Tucker, speaking after Friday’s meeting, said the decision to reauthorize Wheeling University was not political, but based on commission criteria and actions taken by the university.

“We put these conditions in place because we wanted to ensure that the students at the institution were being taken care of,” Tucker said.

According to the commission, full-time undergraduate enrollment at Wheeling University decreased from more than 700 last year to 375 this school year.