Student speaks to Board of Education on school consolidation proposal 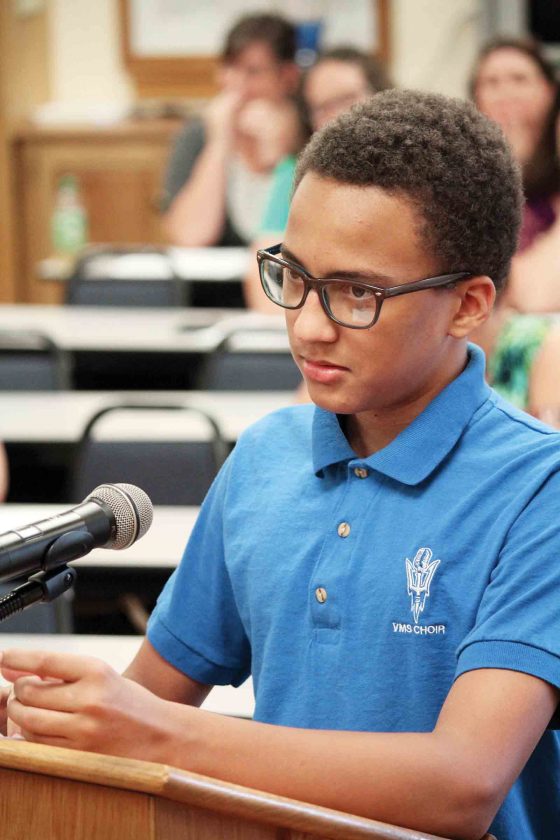 PARKERSBURG — Community members and educators continue to voice concerns over the possibility of school closures.

The Wood County Board of Education met Tuesday in regular session to approve personnel changes and a meeting schedule for the 2019-20 school year.

The board also heard from a student and administrator from Van Devender Middle School. Parents, educators and members of the public have addressed the board at nearly every meeting in recent months, asking members to reconsider a possible plan to close and consolidate four schools — McKinley, Waverly and Worthington elementary schools, and Vandy.

Justus White, an eighth-grade student and choir member at Vandy, told the board about his experience at the school and his desire to see it remain open. White was accompanied to the meeting by parents and students wearing blue and white Vandy shirts.

“The teachers, they care more about the kids than they do their jobs,” he said. “Where would everyone go? To most kids, Vandy is a second home. They rely on the teachers to help with more than just education.

“What I’m trying to say is, for these kids’ sakes, please don’t close Vandy.”

Vandy Principal Darlene Parsons also spoke, encouraging the board and administration to look at alternative ways to improve the district’s finances, such as employing a full-time grant writer.

“I know that doesn’t specifically save Vandy, but I think it’s a fiscally responsible thing to do,” she said.

Parsons also encouraged the board to look at ways to promote schools and boost enrollment. Parsons said she already has spoken to Superintendent Will Hosaflook about the possibility of transitional kindergarten.

“It’s for those students who turn five in September but they’re still not quite ready for kindergarten,” she said. “That is one way to add enrollment and perform a service for the community.”

Parsons said she will continue to bring ideas and encouragement to the board while fighting for Vandy and its students, but added she appreciated the board and the administration’s willingness to listen to stories and ideas from her and others at the middle school.

“We feel like we’re being heard, and that is a huge thing,” she said.