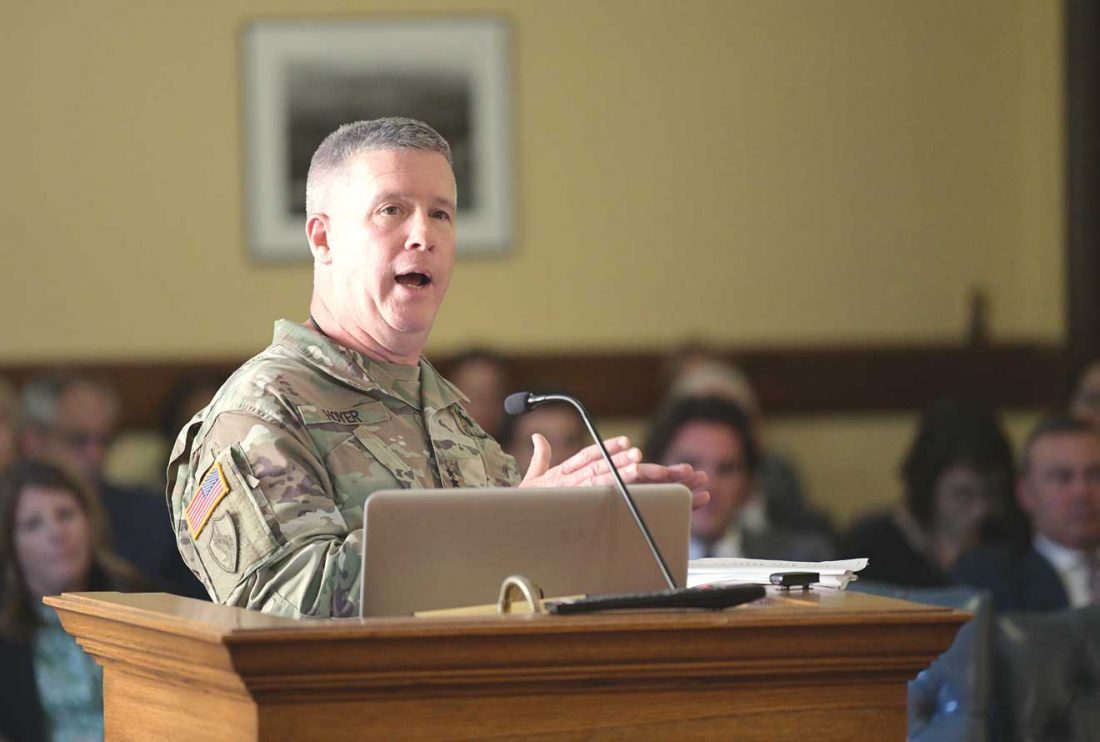 CHARLESTON — It’s been more than three years since torrential rains caused small rivers and streams to overflow their banks, sweeping homes — and some people — away.

It’s been more than 18 months since the U.S. Department of Housing and Urban Development gave the go-ahead to spend one of the largest grant awards in state history in several counties to put people back into homes in these washed-out areas.

Along the way, there’s been a pause to investigate the amount of money the grant management company was being paid; construction contracts that bypassed state oversight and approval; increased scrutiny by HUD; and a fired commerce secretary and fleeing staff.

Since last June, the West Virginia National Guard has been placed in charge of the RISE West Virginia program — the state Commerce Department initiative to use $149 million in community development block grant monies to rebuild and renovate homes in Kanawha, Greenbrier, Nicholas, and Clay counties.

For a while, the Guard was making progress on this front, but that has begun to slow down again, causing the state to end up on HUD’s “slow spender” list, even as the state has received an additional $106 million in CDBG monies for disaster recovery. 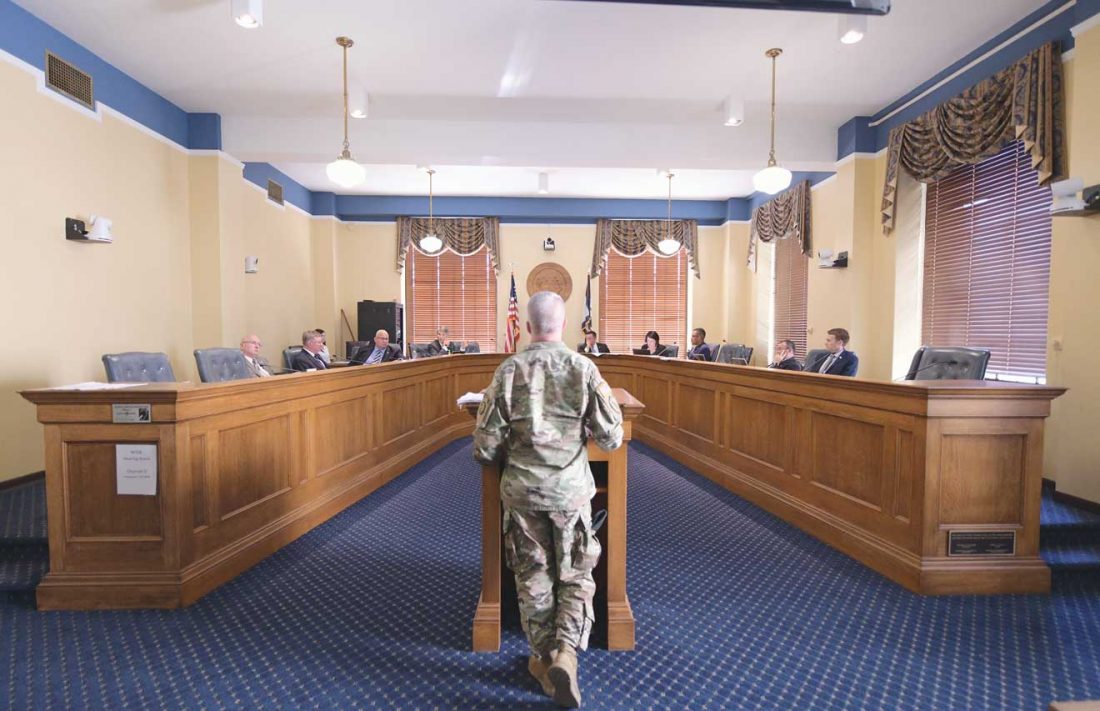 It’s a mission that the Guard, Gov. Jim Justice, and the West Virginia Legislature is dedicated to seeing through, though the best way to do that is hard to see through the murky waters.

James Hoyer, adjutant general of the West Virginia National Guard, is no stranger to tough assignments. He is a Green Beret, commanded a special operations group, and spent time deployed in Iraq in the mid-2000s.

Managing the RISE program, however, might be one the most daunting challenges yet: the battle with red tape.

“It’s obviously a complicated and complex program for a number of different reasons,” Hoyer said in a phone interview. “HUD programs by their nature are complex housing programs and they come with a lot of rules, regulations and restrictions. This is the first time that the State of West Virginia has done a HUD disaster recovery program bigger than $2 million dollars.”

The RISE program fell in Hoyer’s lap June 4 after a nearly five-month pause in the disaster recovery program operated by the state Department of Commerce. HUD had just signed off on the state’s action plan for the $149 million grant and granted spending authority Feb. 20. A week later, the program came to a screeching halt.

It was later revealed through that the Commerce Department entered into six illegal contracts with Horne LLP — a company handling the management and compliance with the HUD grant — totaling $18 million. None of the contracts with Horne were separately bid and did not go through the Purchasing Division or the Attorney General’s Office.

It was also revealed that Commerce entered into seven contracts with four construction companies totaling $71,430,000 that were signed with the state before HUD’s Feb. 20, 2018, approval to use the funds. At one point, the Legislative Auditor’s Office questioned whether any homes had been built through RISE prior to June 1, 2018.

After former state Commerce Secretary — and now Republican candidate for governor — Woody Thrasher resigned along with other department staff involved in RISE, Hoyer got to work trying to make the botched program work. He consolidated the case management system of RISE with the state Voluntary Organizations Active in Disaster (VOAD) system to quickly identify remaining housing needs in the disaster zones.

By the beginning of last August there were 18 families either in new homes, renovated homes, or mobile homes. By mid-September the number of families in homes rose to 25. By October, the state had been removed off HUD’s slow spender list — states that spend 10 percent less than the monthly pace required to fully use the grant by its target closeout date.

But West Virginia went back on the HUD slow spender list in April and has been there ever since. According to a June 28 report from HUD, West Virginia has a balance of $134 million of the $149 million grant. The state has only averaged $660,000 in spending over a three-month period.

What started out as four contractors has now gone down to one — Thompson Construction, a company handling mobile home placements that shares a lobbyist with the Greenbrier Resort owned by Justice.

“Based on the Legislative Auditor in the State Auditor reviews, we had to re-bid contracts. We have only had two contractors actually bid on contracts so far,” Hoyer said. “We’ve had very few contractors bid on these contracts. You award based on what state purchasing tells you has met are state law and guidelines. That limits your construction throughput if you’ve only got one contractor.”

According to the National Guard, as of July 19 there were 41 homes in active construction — 18 mobile home replacements, 15 reconstruction projects, and seven demolitions. The total number of outstanding housing program cases was 409. It’s a number that fluctuates as some new applicants are added and some are removed when contact can’t be made.

Hoyer said the slowdown is not from lack of trying. The RISE team and Guard members are working their way through HUD paperwork, environmental assessments, unaddressed infrastructure needs, and floodplain issues.

In many cases, the Guard is having to build new roads just to get to the dilapidated homes for assessment. In one case, the RISE team found an abandoned coal mine, requiring a whole new set of requirements and red tape to be waded through. In another case, a construction crew found an issue on a property requiring them to move the footprint of a house 10 feet, which required a second environment assessment.

“Those are all the complexities of things that sometimes I don’t think the general public gets the advantage of seeing or hearing and then all they hear is ‘Hey, there’s still 400 cases. Why is it taking so long,'” Hoyer said.

Of the 409 cases in the RISE system, 295 cases have been assigned for construction. VOAD will handled another 20 cases, and 30 reconstruction cases are slated to be submitted to the state Purchasing Division for approval. The Guard said there are 43 cases awaiting assignment.

Due to concerns raised by lawmakers, a new version of the bill — House Bill 209 — was added to the special session call July 19. The bill would only apply to active states of emergency or preparedness called prior to July 1, 2019. If it had passed, the bill would sunset March 1, 2020. Hoyer said state code puts limits on how many homes they can bid out at one time.

“The way our state purchasing laws are written we have to have every address with the specific homeowner in place certain level of the case management process before we can put it out for the bid process,” Hoyer said. “You’ve got to build up a bunch of them before you can get out to bid.”

After the House Judiciary Committee amended the bill July 22, HB 209 was limited to states of emergency, only residential structures could be part of an open-ended contract, and a cap of $5 million was put on the contracts. Ultimately, it was decided by the Joint Legislative Committee on Flooding that the bill wasn’t needed at all.

“After the Flooding Committee heard testimony Tuesday that said all contracts for housing construction through the RISE recovery program would be let by the end of August regardless of the passage of this bill, we decided it would be best to wait to address this issue in the next regular legislative session,” said committee chairman Dean Jeffries, R-Kanawha.

While Hoyer would like to see some of the red tape cut away to make his job easier, he understands why these kind of grant programs are as complicated as they are. Hoyer said he is committed to seeing his mission through.

“These are all things that were done over the years and guidelines and regulations put in place because obviously there were issues in other places around the country that that led to the government to put these in place,” Hoyer said. “You’ve got to work through them and make it work.”

Jeffries said the legislature plans to take a closer look at the bill and the state’s purchasing laws in general to see if there are ways to ease restrictions during disasters but ensure that taxpayer dollars are spent wisely.

“We are encouraged by the progress being made and we look forward to continued efforts to move the recovery process forward,” Jeffries said. “I believe if we continue to work further with the administration and have an open line of communication on this issue, we can address it in a manner that allays everyone’s concerns.”