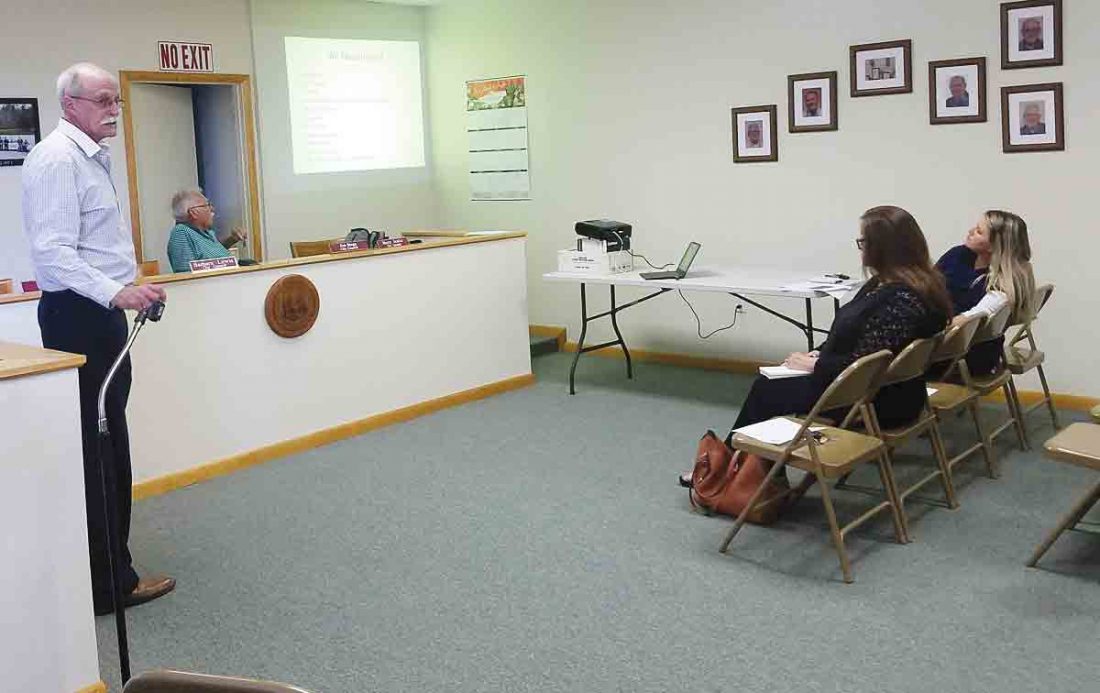 Committee president Marty Seufer presents a slideshow of information to the group talking about why becoming a Bee City is important. (Photo by Madeline Scarborough)

WILLIAMSTOWN — Bees pollinate 80 percent of foods and 90 percent of wild plants and trees rely on pollinators for the survival of their species.

The city of Williamstown is taking steps to educate its community on the importance of pollinators, and how to make the area attractive to pollinators.

“There used to be a large population of bees, but with each year there are less and less in our area,” said committee president Marty Seufer.

At Monday’s first Bee City U.S.A. committee meeting, Seufer presented information on the pollinator population and how the community can start helping even in small ways to preserve them.

Williamstown became the first Bee City in West Virgina on May 21 and the 83rd in the United States.

The city, by becoming a Bee City, would be providing a healthy habitat, nearly free of pesticides, for sustaining pollinators.

“I want this to be informational to the students and residents, to help kids be less afraid of them and how to help them thrive,” said Seufer.

The honey bees’ “Colony Collapse Disorder” brought the issue to global attention, but all pollinators are facing troubling threats and many are decreasing at alarming rates.

“I am not advocating for bee hives, but to make our city attractive to pollinators,” Seufer said.

Pollinators are more than just bees; there are many other animals that are classified as pollinators, such as butterflies and bats, which are hurting as well.

Seufer said that loss of habitat essential for food and shelter, diseases and parasites, and inappropriate pesticide use are reasons for their decline.

“You look at all these flowers and think pollinators have plenty to eat, but there are so many toxic pesticides used and nectar is just not what it used to be,” Seufer said.

Seufer explained that honey bees and other pollinator populations started declining in the 1950s with the introduction of pesticides, some of which have since been banned and replaced. The meeting attracted more than just local residents, with attendees coming from out of town to help get involved.

Cynthia Davis, from Pickaway County in Ohio, has been a beekeeper for 12 years.

Davis talked about how she has obtained group participation and community involvement with her hives,

Another beekeeper, Teresa Wagoner, from Boaz, talked about small steps people can take to help the bee population, such as placing rocks in your bird baths to give bees something to land on and prevent drowning.

The committee is planning on teaming with its Tree City group to help increase the number of native trees, so the native bees and other pollinators can have abundant native pollen.

For more information, questions, to volunteer with the group on upcoming projects or join the committee anyone can contact the Williamstown City Clerk’s Office, and they can connect you with the right representative.