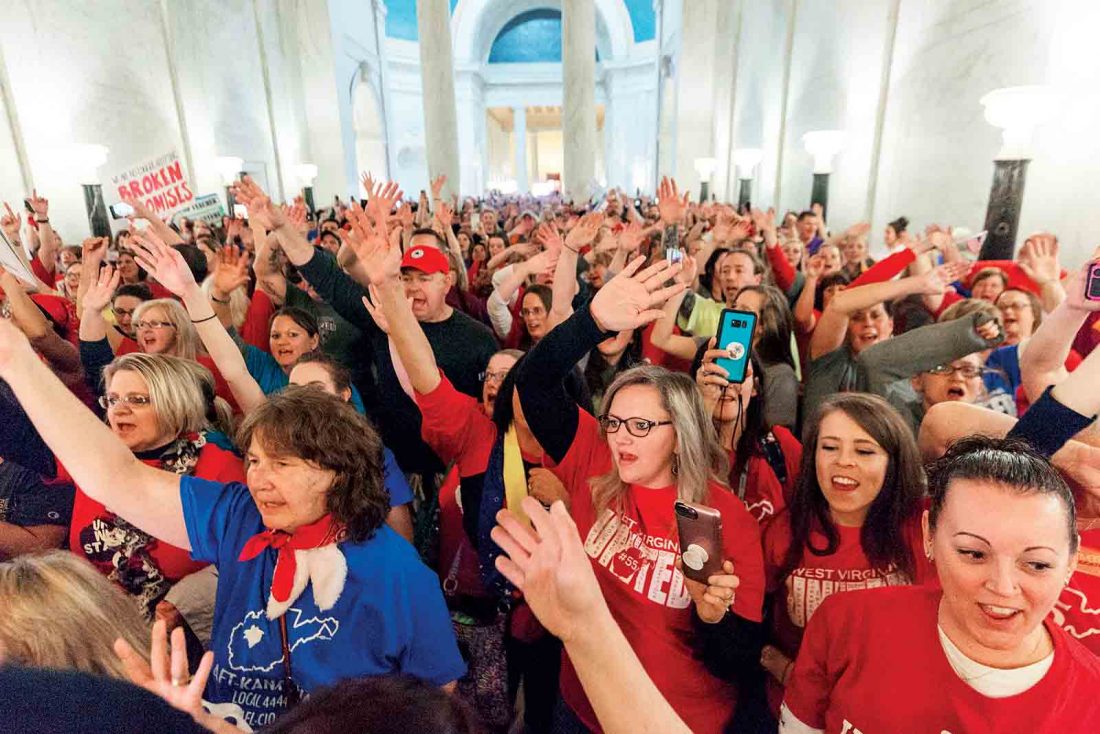 In this 2018 photo, teachers and school personnel celebrate after the state Senate approved a bill to increase state workers pay across the board, at the capitol in Charleston. Despite teacher protests, Republicans in the West Virginia House of Delegates have advanced their wide-ranging education proposal to allow the state's first charter schools. (AP Photo)

PARKERSBURG — Area educators are expressing frustration as the state House of Delegates considers a Senate bill this week during a special session.

The House met Monday morning only to recess until 6 p.m., with four committee meetings being held simultaneously throughout the day. Among those committees was consideration of a Senate education bill which critics say mirrors the Education Omnibus Bill which was killed during the regular session.

Meanwhile, educators and service personnel rallied at the state Capitol demanding portions of the bill — specifically those dealing with charter schools, educational savings accounts and language added by the Senate to punish public workers who go on strike — be removed, or the bill defeated in its entirety. State-level teacher and service personnel leaders have repeatedly called upon legislators and Gov. Jim Justice to cancel the special session, renewing those calls Monday morning prior to the House session.

“Once again, teachers and other public education employees are rallying at the Capital and lobbying on behalf of their students and for the sake of their careers,” said Greg Merritt, president of the Wood County American Federation of Teachers. “Information gained at public forums, held statewide, should guide lawmakers and policy-makers as they prepare education reform. Yet, certain legislators, particularly certain members of the West Virginia Senate, ignore that information and continue to focus on proposals that divide rather than unite, and present an omnibus bill that harms the children of this state.

“It is a shame that teachers and other employees have to continue addressing these issues, after two ugly sessions that included work stoppages.”

“We were hoping the House would kill the legislation since it is a rehash of Senate Bill 451 that they killed during the regular session,” said Bruce Boston, president of the Wood County Education Association. “It is disappointing the legislature is wasting taxpayer money debating Senate Bill 451 a second time while ignoring genuine concerns that were identified in the (West Virginia) Department of Education’s listening sessions earlier this spring.”

The proposed bill also contains a five percent pay increase for teachers and service personnel which was promised by legislators and the governor during the first work stoppage. Senate officials blocked attempts to have a separate pay raise bill considered during the regular session. The House approved one such bill but it was never brought to the Senate floor.

Educators have said repeatedly the included pay raise is not worth the damage that would be done by other parts of the bill.

“Teachers are willing to forego a promised pay raise if it means seeing the harmful parts of the Omnibus bill defeated,” Merritt said. “Teachers care about their students, and recognize the future of our great state hinges upon a high-quality public education. We trust the West Virginia House of Delegates to do the right thing.”

Boston said so far legislators have failed to address what educators say are the real issues in public schools.

“We need smaller class sizes, wrap around services, and progress made in the opioid epidemic,” Boston said.

“If reform is needed, it must be led by public education employees. We know what works,” Merritt said.