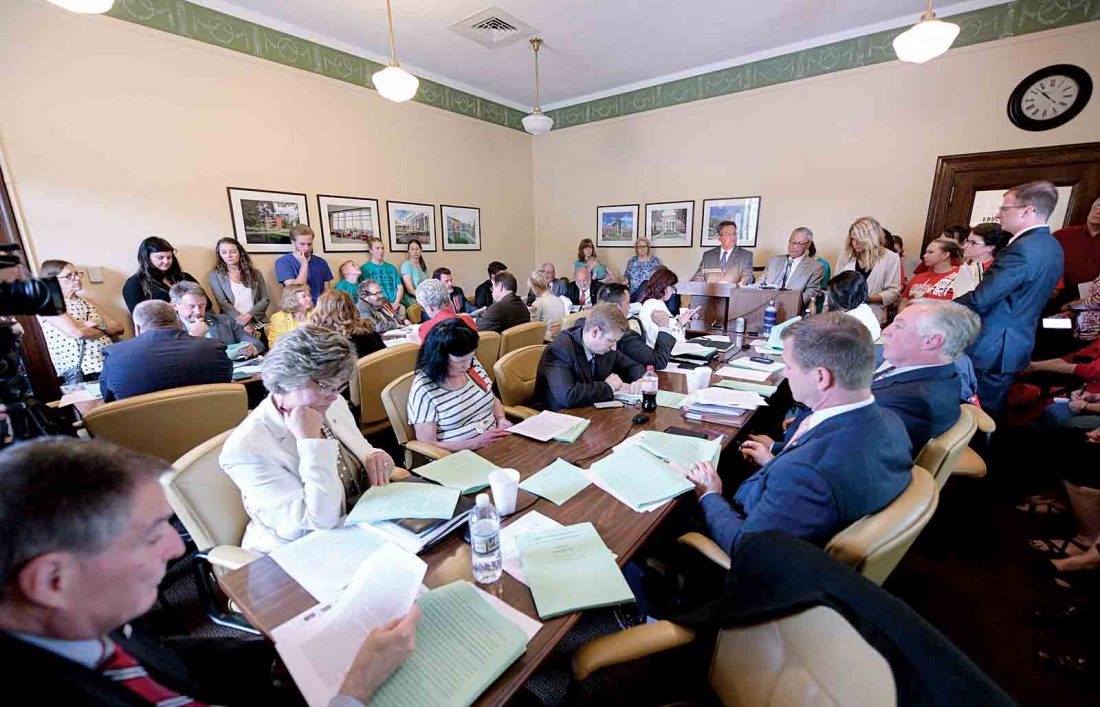 Members of select committee C of the House of Delegates meet in a packed committee room to review the House’s version of the Senate’s Student Success Act. (Photo Courtesy/WV Legislative Photography)

CHARLESTON — Several education reform bills were moved to second reading in the House of Delegates on Monday evening after four select committees passed several bills, including a brand-new omnibus bill.

The House met Monday to resume the special session on education betterment called by Gov. Jim Justice in March. Delegates will return this afternoon at 1 p.m.

After gaveling in Monday morning, the delegates split up into four select committees on education reform. The select committees passed 16 bills, with all but four moving up to second reading and amendment stage this afternoon.

During the floor session Monday evening, an attempt was made to prevent HB 206 from moving to first reading. A motion to take up the bill immediately and read it a first time passed by voice vote.

HB 206, coming in at 144-pages, removes the “Student Success Act” title from the bill. It removes SSA provisions for professional development, school calendar changes, and all anti-strike provisions amended into the Senate’s version that would have docked teacher pay, canceled extracurricular activates, and required schools to stay open.

The House omnibus bill requires evaluation of a digital literacy program included in the Senate bill, tweaks changes made to the Innovation in Education Act in how those schools request waivers from state Board of Education policies, and allows schools to partner with private health care to provide access to mental health services.

It replaces a tax credit for school supplies with a $200 increase in funds for supplies. It also allows for start date to be considered in seniority when approving reductions in force.

It also still proposes giving counties their state aid in the form of a block grant, decreasing the levy rate to allow counties to keep more of their local share, creating a website for the public to view real-time spending, bonuses for teachers who miss less than four days of work per school year, and teaching scholarships as an incentive for college graduates to work in West Virginia schools.

Where the House originating bill differs from the Student Success Act is public charter schools. The Senate version of the bill included an unlimited charter program, allow groups to come together as non-profits and apply to operate a charter free from state Board of Education rules and regulations as long as the county accepts the application.

Instead, major changes in the select committee’s originating bill include: creating a start date of 2021 for the first charter schools to start, capping the allowed number of charters to 10, and removing the appeal process should a county school board say no to a charter application. Espinosa said it would be up to each of the 55 county boards to review applications and ensure there is a need for the charter and that the needs of students are addressed adequately.

“The applicant would have to make the case that this was a need of that community, but ultimately that local board would have to agree,” said Espinosa, the interim chairman of the House Education Committee. “All of that would have to be done to the satisfaction of the local board.”

Still, Democratic members of the select committee were upset that House leadership chose to originate a new omnibus bill. Some hoped the House would break up the Student Success Act into smaller bills.

“I don’t agree with this bill. I agree with parts of this bill,” said Del. Linda Longstreth, D-Marion. “We entertained a thought from (House Speaker Roger Hanshaw, R-Clay), I believe, that these bills would be put into committee to be voted up or down … now we have to vote on the entire package and if we don’t like one part, we have to vote no. It should be broken down.”

Select committee Vice-Chairman S. Marshall Wilson, R-Berkeley, said he wasn’t happy with the bill at first, but in the interests of compromise he could live with the bill.

Both bills will go to the House Finance Committee, along with bills to provide a cost of living increase for retired school employees, restarting a sales tax holiday for educational purchases, and tax credits for to parents and legal guardians providing home or private schooling. Another bill in the select committee updating regulations on innovation zones moved to first reading.