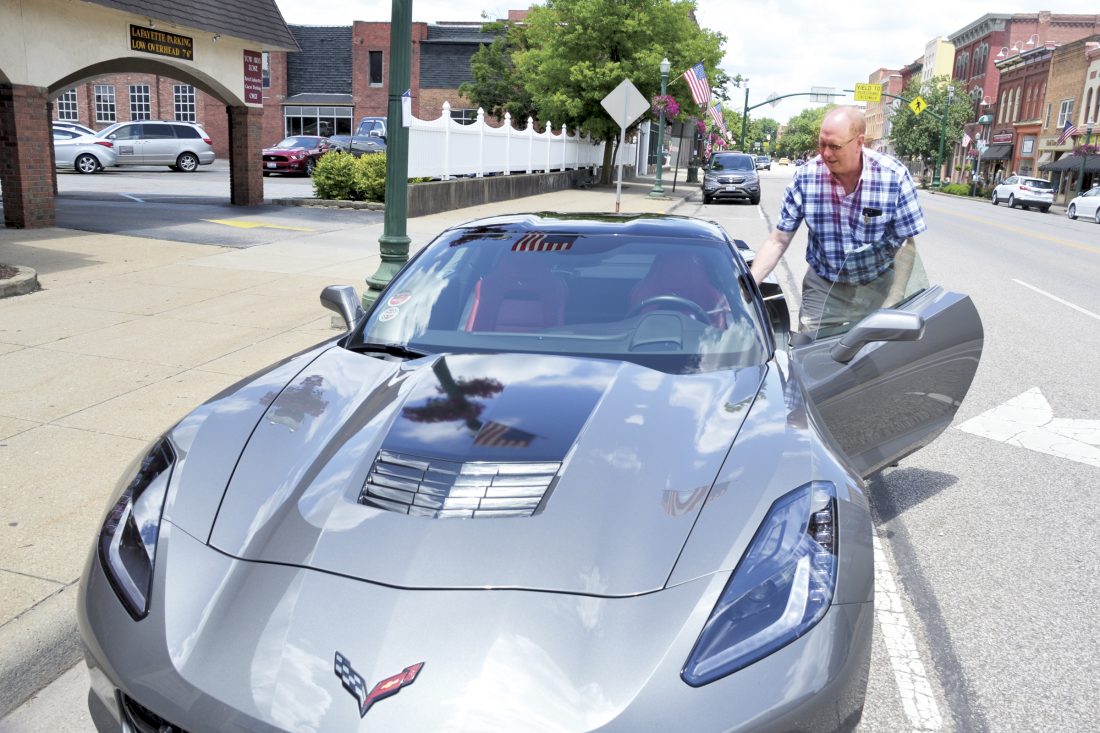 Photo by Michael Kelly Steve McCarthy climbs into his Corvette after leaving a Marietta Noon Lions club meeting at the Lafayette Hotel. McCarthy has organized the annual Lions Fathers Day Car Show for 20 years, and he said more than 100 vehicles are registered to show up at East Muskingum Park today.

MARIETTA — There was a time in America, especially midwestern America, when fathers and sons (and less often in those days, daughters) who could barely talk about anything serious to each other could form deep relationships over the dirt, busted knuckles, swearing and solid satisfaction of working on cars together. It is less common now, with families and cars both having changed in ways that were unforeseeable 50 years ago, but it still exists.

The country’s fascination with automobiles remains, as demonstrated by the numerous shiny classics that show up at the fairgrounds, parks and parking lots every weekend of every summer. In Marietta, the annual Noon Lions Club Fathers Day Car Show, held for the past 26 years, has more than 100 vehicles coming, according to Lion Steve McCarthy, who has organized the event for 20 years.

“A lot depends on the weather, it looks about 50/50 for rain now,” he said Friday. “But people like the setting, those cars parked on the grass in Muskingum Park, and of course there will be the French fry trailer.”

Phil Correll, 67, is president of the Rollin’ Oldies car club in Parkersburg, and remembers rebuilding a 1971 El Camino Super Sport with his son Scot, who is now 49, when his son was in high school.

“It took us a year, but it came out great,” Phil recalled. “From the time he was 15, we were laying under that car, working on it, we painted it bright red with black racing stripes. It was a rust-bucket when I got it, and we scoured junkyards all over the country for parts, made a really nice show car out of it. The neighbor boy, me and Scot rebuilt the engine, we put a big cam in it, it looked and ran like a new car.”

Scot, 49, who now splits his time between Parkersburg and Baltimore, Md., in the oil and gas business, was driving his Ford Expedition back home for the weekend and spoke Friday while headed across the interstate in Maryland.

“I’ll never forget that, some of the best memories I have,” he said. “When I was 15, dad asked me what kind of car I wanted, and I was into classic cars then, I told him I wanted an El Camino. We found one. It had house carpet in the interior, and it was just beat and battered all over. I think he paid $200 or $300 for it. We drove it home and starting going to junkyards for parts. We found a cowled hood out in a field one day on a different type of car and bought it, we got a dash assembly out of a Heavy Chevy, a type of Malibu made back then, bucket seats out of a Dodge Daytona. We had the valve covers and air cleaner anodized in gold.”

It was hard, enjoyable, father-and-son work.

“We had a lot of fun, all those nights and days. I remember cleaning off the firewall, outdoors in the winter — we didn’t have a garage — using a paint scraper,” he said. “We did a lot of bonding in those months. When we got it done, we’d go to car shows together, we went everywhere in Ohio and West Virginia. He had a ’72 Nova then, he still has it now.”

The El Camino won trophies over the years.

“For a high school boy, that made us both feel good, going up against people who could pay professionals to do their work,” Scot said. “That work, the shows, it was something we had in common all those years. I’ll remember it for the rest of my life, and still talk to people about it to this day.”

Like many other trades and pastimes, shade-tree mechanics have become a victim of the digital age. There are few things on a modern, electronically controlled vehicle a hobbyist can do.

“I have six cars, and there are only two of them I can really do much work on,” Phil said. “The rest are all computer controlled, and if something goes bad it can cost thousands of dollars, and you can’t fix it yourself.”

That modernization has come with an incalculable cost.

“I wish dads and sons could do that like they used to,” he said. “Nowadays, I’m afraid we’re losing a generation. For us, it helped our relationship, and he turned out to be a pretty good mechanic. When he was a 16-year-old boy, I was gone a lot, working on construction, and cars were what we had in common.”

It isn’t just sons that learn the secrets of auto mechanics from their fathers. Amanda Fletcher of Marietta grew up with a father and an uncle who gave her a childhood love of cars that is still with her.

“I’d tinker on my mom’s car with my dad on weekends, and during the week I’d work on cars with my uncle Dave,” she said.

Fletcher, now 28, said she has memories of being inducted into mechanical work going back to when she was 5 years old.

“For as far back as I can remember, I was with my dad or uncle doing things on cars, changing the brake fluid, changing the oil,” she said. “Dad made sure I learned to change a tire before I even learned to drive. He said, ‘My daughter isn’t going to get stranded, she’s going to learn to take care of herself.'”

There is always something to be done on a car, she said.

“Even the washing, the detailing, always hand-waxing, spotless and pristine,” she said.

Her father, Greg Nicholson, 58, had an old Chevy truck, and her uncle, Dave Morris, had a 1980s-era Camaro.

“Uncle Dave had this old beat-up Camaro, and for as long as I can remember it sat in my grandmother’s yard. We were always doing something to it, and he’d say, ‘I’m going to get this thing running one of these days.'”

Her uncle, she said, died in 2014 when he was 50. Her love of automobiles has continued into adulthood, and until a couple of years ago, when her dad’s knees would no longer allow him to get under cars, they still did oil changes together.

“How many girls can say, I got to spend my Saturday mornings working on a car with my dad?” she said.

The vivid memories linger into age, and Scot Correll still thinks about the El Camino, which he said was an award-winner because of its color.

“The red attracts the crowds, that bright red, people just flock around it,” he said. “If you’re going to show a car, paint it red.”

Phil said he probably doesn’t have the energy any longer to do a full restoration job, but he said he’s tempted by the AC Cobra kit cars.

“I still might do that some day. It would be satisfying to assemble a whole car,” he said. “That would be cool.”

Scot sold the El Camino in 1992 and bought a Mustang, but he still thinks about that first project.

The Corrells can be contacted through the Rollin’ Oldies Facebook page.

PARKERSBURG — The number of COVID-19 cases in Wood County continues to rise, particularly at a senior living ...

PARKERSBURG — The Wood County Board of Education will meet in regular session 6 p.m. Tuesday at the district ...