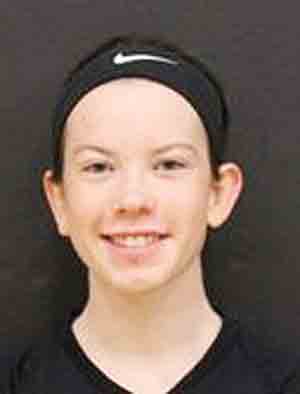 SISTERSVILLE — The recipient of the annual Adam R. Kelly Memorial Scholarship Award has been announced.

Tyler Consolidated High School senior Emily Lancaster, daughter of Chandra and Jeff Lancaster of Middlebourne, plans to attend West Liberty University in the fall to pursue a degree in criminal justice. She plans to join the Marine Reserves her sophomore year and hopes to work in law enforcement after earning her degree.

The $500 scholarship is annually given to a graduating senior from Tyler Consolidated in honor of the late Country Editor columnist Adam R. Kelly, who died in 1990 at the age of 65. The scholarship was established in June 1990.

The announcement of the award was made during the Class of 2019 commencement exercises held May 23.

At Tyler Consolidated, Lancaster was president of the Future Business Leaders of America, vice president of Students Against Drunk Driving and during her senior year was selected by the faculty as the Elks Student of the Month. She was a member of the National Honor Society and the Spanish Club.

Involved in school theater, Lancaster served on the executive committee of the Silver Knight Players and is a member of the International Thespian Society Troupe 8668.

While a student in U.S. Studies, she participated in the James Madison Legacy Project in which she studied the We the People: The Citizen & the Constitution curriculum.

As a member of the track team, she holds the Tyler Consolidated record in the pole vault and was a four-year member of the volleyball team that played in the West Virginia state tournament each year.

Kelly, who moved to Sistersville in 1954 and remained there until the time of his death, was editor and publisher of The Tyler Star News until 1979. He then began writing “The Country Editor,” which appeared in The Parkersburg News, The Wheeling Intelligencer and News-Register and other West Virginia publications.

Kelly won numerous state and national awards for his pieces.

From 1990 to 1993, two scholarships were given each year to Tyler County graduating seniors. The scholarship committee considered candidates from both Sistersville and Tyler County high schools, selecting one recipient each year from each school.

Applicants must submit a resume with an essay titled “In Defense of Freedom.” They are also interviewed by the scholarship committee.

Applications, essays, academic achievements, extracurricular activities, college plans and financial need are assessed by the committee during the selection process.

The scholarship fund was endowed through contributions from area businesses, friends and newspaper journalists from throughout the state. Additionally, an Adam R. Kelly Memorial Golf Tournament was held for three years at the Sistersville Country Club, where Kelly was a member.