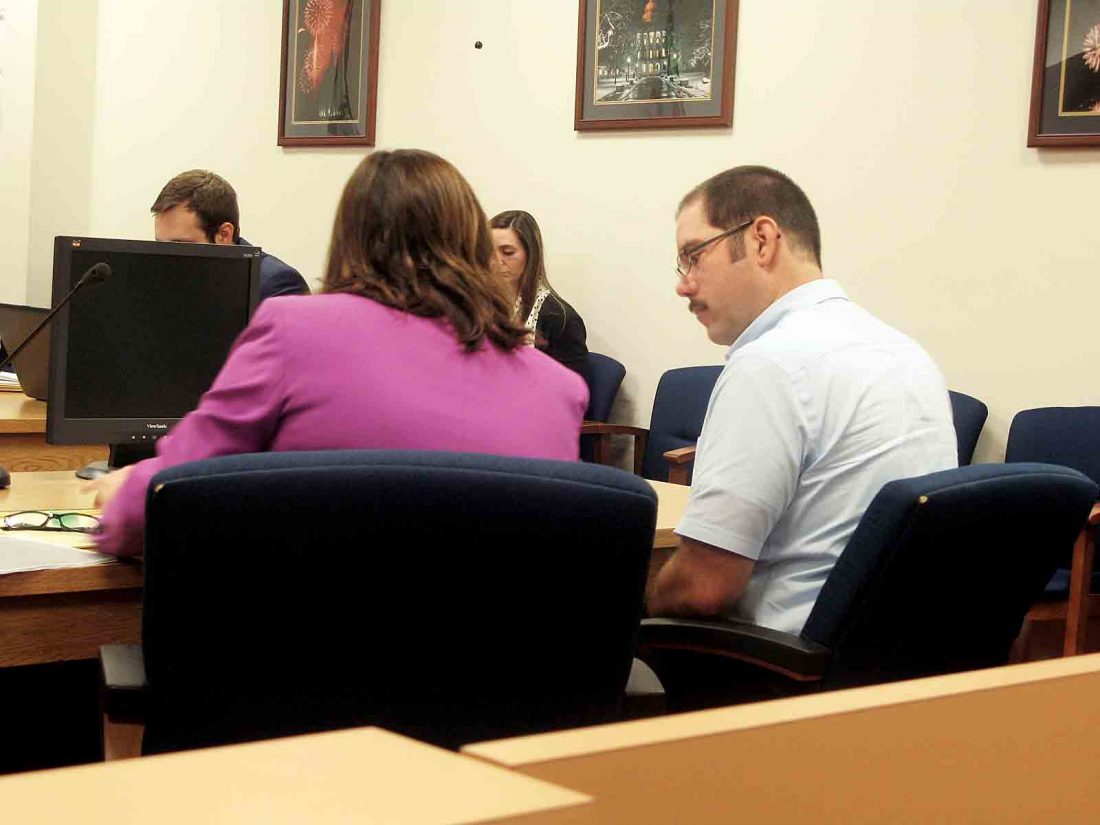 Photo by Evan Bevins Former Vienna Elementary School custodian Justin Hoover, right, speaks to attorney Ginny Conley shortly before the start of a sentencing hearing Thursday in Wood County Circuit Court. Hoover was sentenced by Judge J.D. Beane to two years in prison, suspended for five years of probation, on charges related to viewing child pornography images on a computer at the school and his phone.

Defense attorney Ginny Conley said her client — Justin Ray Hoover, 37, of 2840 Middle Fork Lee Road, Washington, W.Va. — took responsibility for what he did, cooperated with law enforcement and is a low risk to reoffend.

Hoover, who Conley said has led a “very isolated life” and has self-esteem issues, declined to address the court when given the opportunity by Wood County Circuit Court Judge J.D. Beane.

“He wanted me to tell the court and everyone in the courtroom that he is very, very sorry for what he has done and the pain he has caused,” she said.

Hoover was arrested in September after police reportedly found more than 200 images of children ages 7, 8 and older on a computer in the custodian’s office at the school. He pleaded guilty in March to an information charging him with a felony count of distribution and exhibition of material depicting minors engaged in sexually explicit conduct and a misdemeanor charge of child erotica.

In requesting home confinement or alternative sentencing, Conley said this case was different from others she has seen as both a defense attorney and former prosecutor.

“The evidence shows that no images were saved” or shared, she said.

Ten or fewer of the images depicted sexual contact or exploitation, qualifying for the felony charge, Conley said.

“None of those images were on the school computers. They were deleted from his telephone,” she said.

The misdemeanor charge related to images that portrayed minors who are partially clothed.

Even though the images weren’t shared or saved, “they’re a memorialization of children being exploited,” Assistant Wood County Prosecutor Jeremy Wolfe said, and viewing them perpetuates their use.

And while Hoover indicated he took safeguards to make sure no children at the school could see the images, Wolfe said there was a risk a child could have stumbled upon them.

“Doing what he did really did expose the children at the school to a risk of harm,” he said.

Wolfe said the state recommended imprisonment based on the facts of the case and a deterrent to future offenders. He also questioned whether Hoover was truly remorseful, saying he seemed to blame work-related stress and not understand the ramifications of his actions.

Conley said Hoover confessed what he had done not only to law enforcement and Wood County Schools but to his church. She noted members of his family and church community were in the courtroom supporting him.

Hoover will continue to live on his parents’ farm, where he does not have Internet access nor want to obtain it, Conley said. He has also been in contact with a therapist who treats sex offenders.

“This is a low-level one of these cases by someone who is willing to get help and has already made the appointment,” Conley said.

Beane pronounced a sentence of two years in prison on the felony count and one year in jail on the misdemeanor, to run concurrently, with credit for two days served. Those were suspended for five years probation, although Hoover could still serve up to 118 days at the North Central Regional Jail as determined by his probation officer. In addition, he must register as a sex offender and perform 100 hours of community service. Once the term of his probation is up, he will be on supervised release for 15 years.

Hoover resigned from his job at Vienna Elementary prior to the Wood County Board of Education taking action on his proposed termination. Conley said there had been no complaints regarding contact with students during the 17 years he worked for the school district.