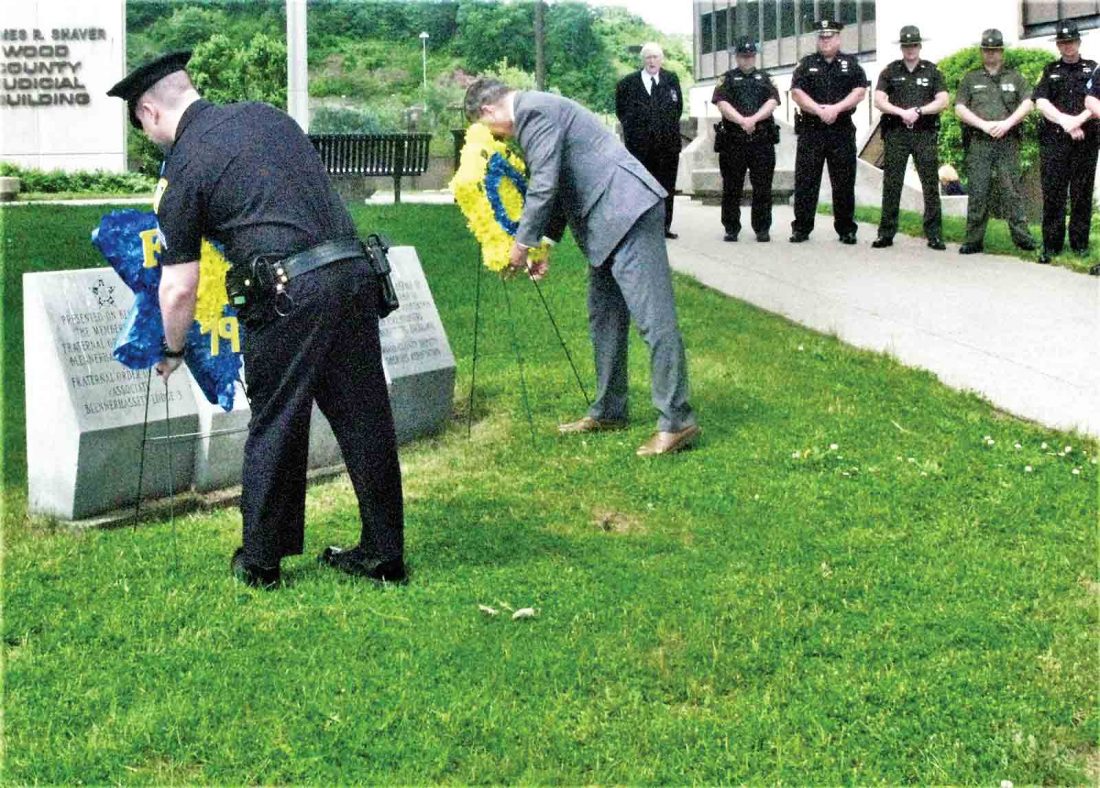 From left, Fraternal Order of Police President Beniah Depue and Secretary of State Mac Warner place wreaths at the police memorial in front of the Parkersburg Municipal Building on Tuesday in the annual National Police Week observation. (Photo by Jess Mancini)

PARKERSBURG — National Police Week activities were held Tuesday in Parkersburg with the annual presentation of awards and the laying of wreaths at the police memorial in front of city hall.

Receiving the Penny McLain Half-Unit of the Year Award was Haley Board, wife of Parkersburg Police Officer Matt Board. The award is named after Penny McLain, wife of the late Doug McLain, a patrolman for about 40 years.

“I just want to say ‘thank you’ for the award,” Board said.

The Charles L. Plum Memorial Award was received by Parkersburg Police Officer Michael L. Bosley, who was on duty and actually dispatched to the ceremony. 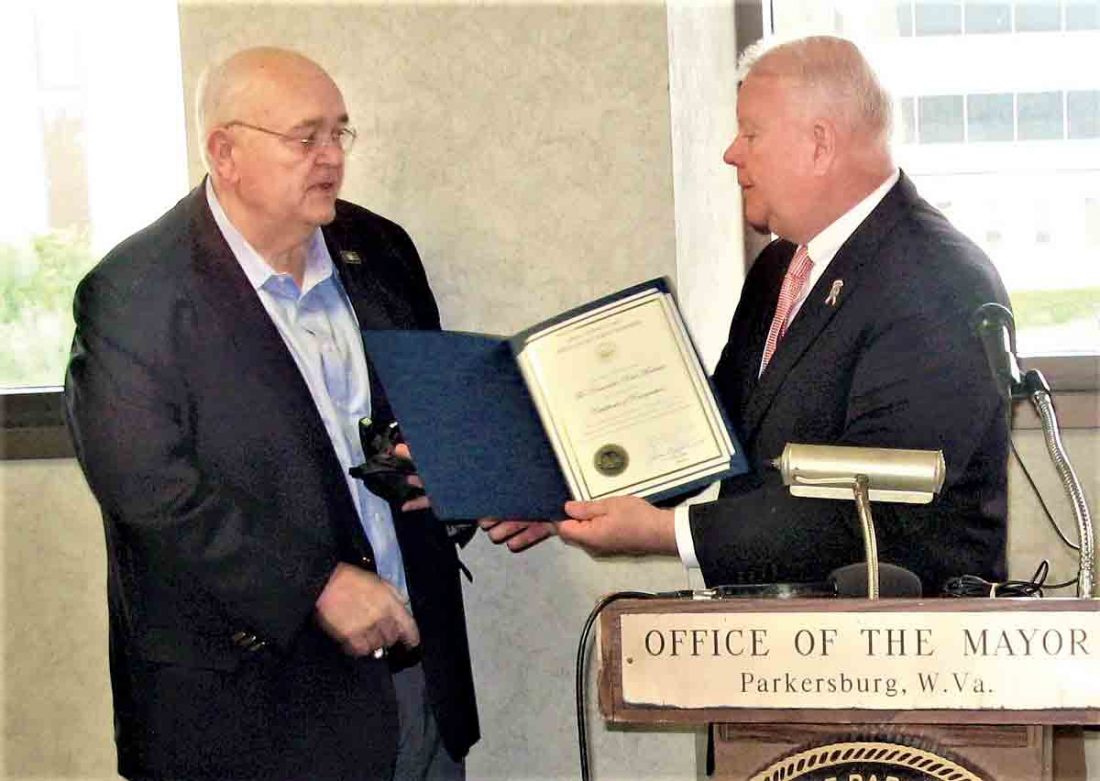 Rick Modesitt, left, a former police chief, receives a special recognition for his service to the state Committee on Crime and Corrections from Secretary Jeff Sandy of the West Virginia Department of Military Affairs and Public Safety on Tuesday during Police Week ceremonies. (Photo by Jess Mancini)

Bosley helped a youngster who was a victim of a crime, Depue said. He bought a bicycle to replace a bike stolen from an SW Resources client who had no other means of transportation.

“He did it because it was the right thing to do,” Depue said.

Vienna Police Chief Michael A. Pifer was the recipient of the Gary D. Deem Lifetime Achievement Award. The late Deem was chief of the Vienna Police Department and a Wood County commissioner.

“What an honor it is to get an award from your peers,” Pifer said. 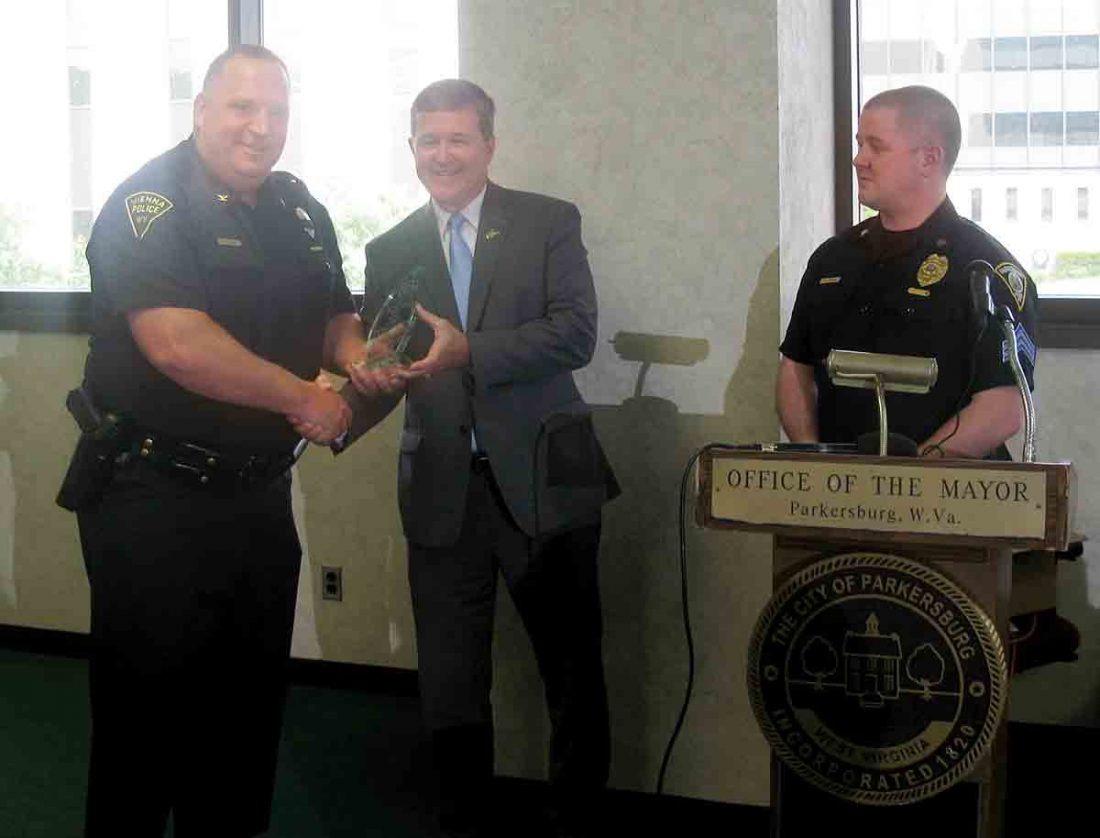 “I know Gary Deem would be very proud of you,” Vienna Mayor Randy Rapp said.

John E. Triplett Jr., the long-time attorney for the Fraternal Order of Police who was elected Washington County Common Pleas Court judge in 2018, received the Distinguished Citizen of the Year Award. Triplett is recovering from brain surgery and the award was accepted on his behalf by Washington County Sheriff Larry Mincks.

The C. Scott Durig Award for Excellence in Criminal Justice was presented to Parkersburg Police Detective Travis Wolfe, who investigates Internet crimes against children. His aid is invaluable to the prosecutor’s office and Wolfe is cross-designated with the FBI and West Virginia State Police, Wood County Prosecutor Pat Lefebure said. 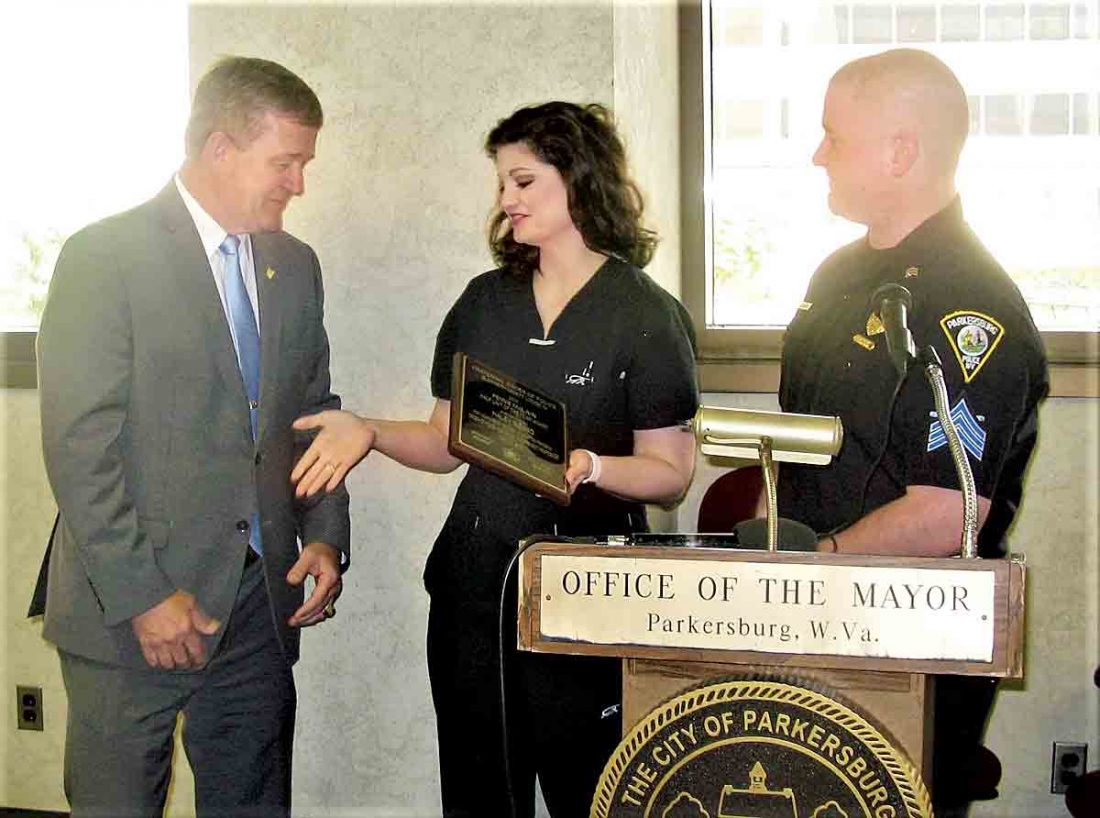 Haley Board, center, receives the Penny McLain Half Unit of the Year Award from Secretary of State Mac Warner, left, and Fraternal Order of Police President Beniah Depue on Tuesday. (Photo by Jess Mancini)

“I’m honored to be chosen for this,” Wolfe said.

Secretary Jeff Sandy of the state Department of Military Affairs and Public Safety presented an award recognizing the service of Rick Modesitt, former police chief of Parkersburg, former member of the West Virginia House of Delegates and former Wood County commissioner, on the state Committee on Crime and Corrections.

Speaker for the event was Secretary of State Mac Warner, a U.S. Army veteran, who spoke of the relationship between the military and police. He used the analogy of an egg, where the hard shell exterior is the military protecting the country from its enemies and police as protectors of the soft interior representing society.

“It’s an honor for me to be part of this ceremony,” Warner said.

The ceremony included the laying of wreaths at the police memorial on the front lawn of the Municipal Building. Williamstown Police Chief Shawn Graham gave the benediction and asked the Lord that the families and children of police officers be given serenity and “peace of mind.” More than 800 police officers have been killed in the line of duty since he left the sheriff’s department in 2014, Graham said. 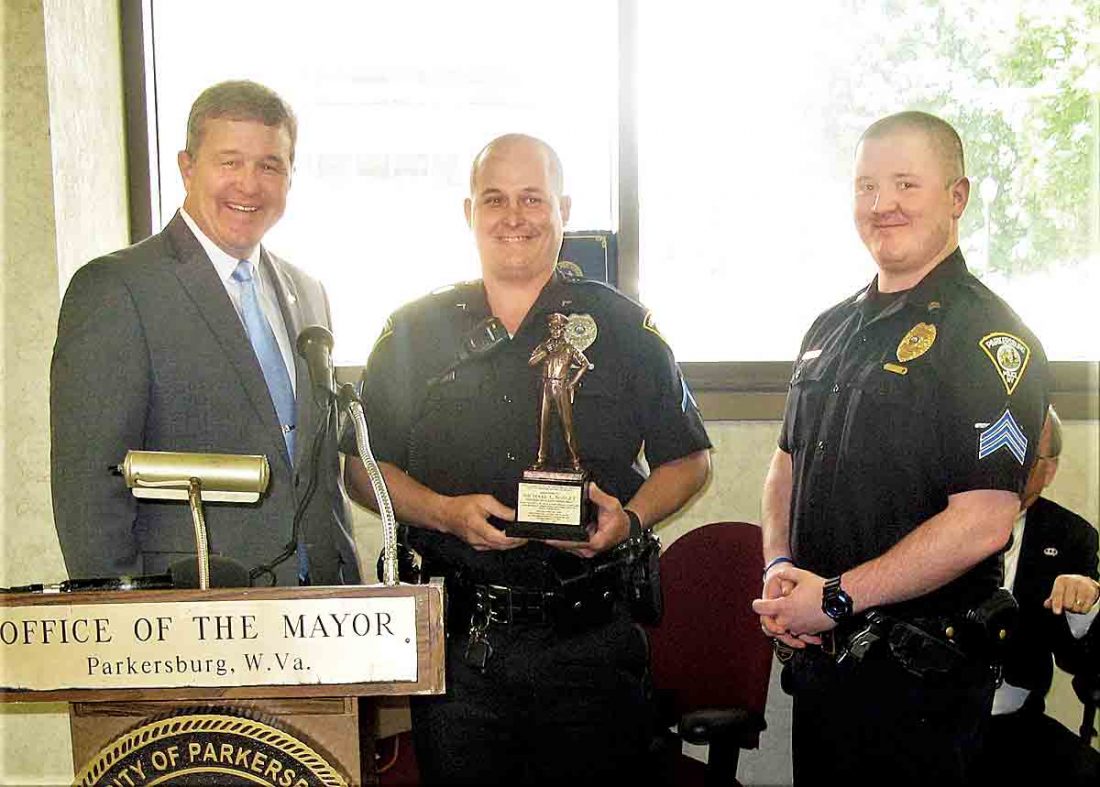 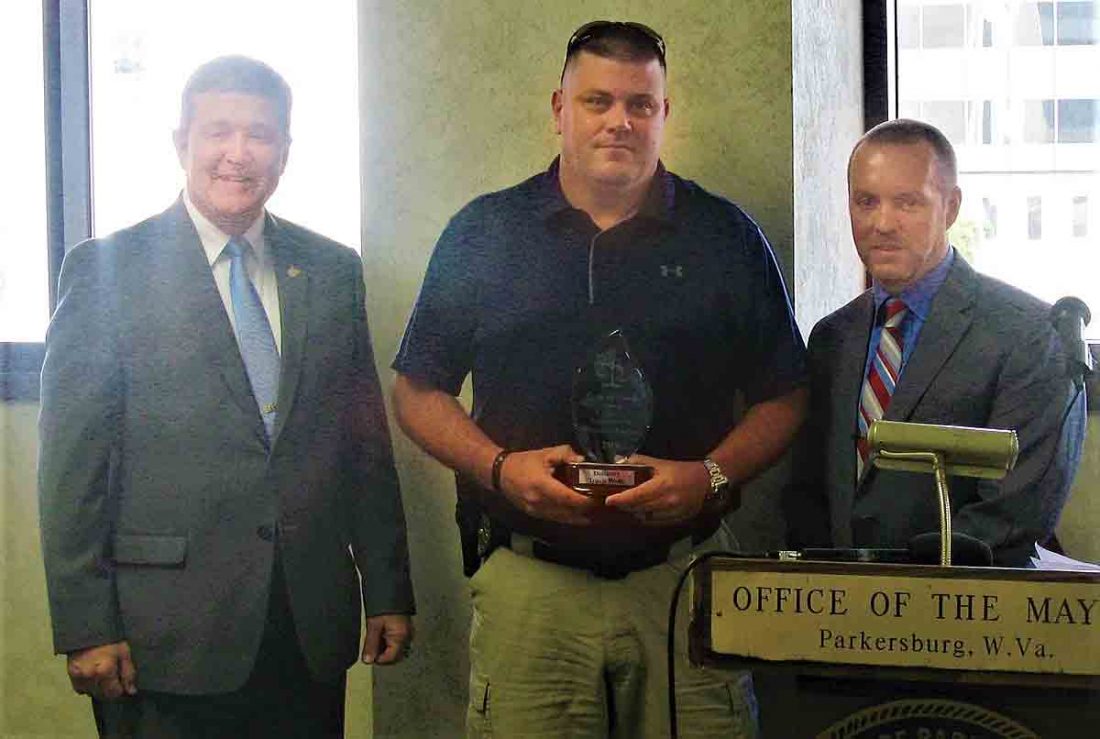