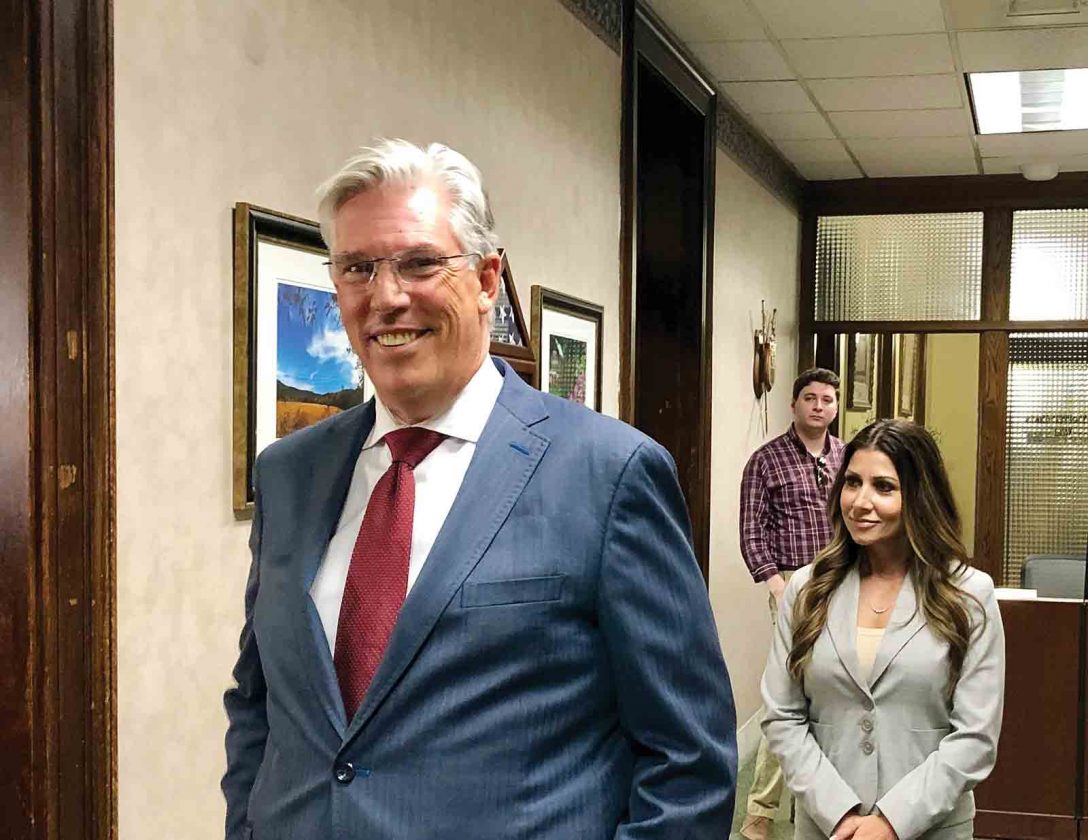 CHARLESTON — Woody Thrasher, a professional engineer who started a successful construction firm nearly 40 years ago and went on to become the state’s commerce secretary, announced his campaign for governor to challenge the man who appointed him then forced him out.

Thrasher traveled to the West Virginia Secretary of State’s Office in Charleston Tuesday afternoon to fill out the pre-candidacy paperwork for his gubernatorial run against Gov. Jim Justice. He announced his campaign to seek the Republican nomination for governor on statewide radio and in his hometown of Bridgeport Tuesday morning.

Thrasher, speaking to reporters in the state Capitol Tuesday afternoon, said he had a simple answer for why he was running for governor.

“I love the State of West Virginia,” Thrasher said. “I just have become enamored with its beauty, its people, and the things it has to offer. At the same time, I’m very concerned about the direction we’re going. I do not believe that state is going in the right direction.”

According to his publicly available voter registration information, Thrasher changed his party registration from Democrat to Republican 45 days ago on March 4. While he has supported Democrats in the past, Thrasher said he mostly identifies now with the state Republican Party platform.

These values include Right to Work and school choice in the form of charter schools, both issues Thrasher said he supports and were the focus of three votes of no confidence against Justice by county and state Republican groups over the last week.

Justice won his 2016 election as a Democrat but switched to Republican in August 2017 at the urging of President Donald Trump, who has sent three veterans of the Trump presidential campaign to help the governor.

Responding to a question during a Tuesday press conference, Justice said he welcomed Thrasher to the campaign but that the former commerce secretary was always more interested in promoting himself than the state.

“From the first day that Woody became commerce secretary he was running for something every day,” Justice said. “Every day he was flying all over the place in the state plane and speaking to whoever would listen to him.”

In 1983, Thrasher and his father founded what would become the Thrasher Group, which specialized in architecture, engineering, and construction. The company employs more than 700 people in seven states.

Thrasher stepped away from his business in 2016 to accept an offer from Justice to become secretary of the state Department of Commerce. Nearly 12 months later, Justice and Thrasher announced a memorandum of understanding between West Virginia and China Energy for an $83.7 billion investment in the state’s natural gas development in the Marcellus and Utica shale plays. The MOU also included investment in chemical manufacturing using the natural gas byproducts produced, such as ethene.

By June 2018, Justice asked for Thrasher’s resignation after issues came to light with a disaster recovery program managed by the Commerce Department.

The U.S. Department of Housing and Urban Development awarded West Virginia more than $149 million in community development block grant funds to rebuild or repair homes destroyed in the floods of 2016. RISE West Virginia, managed by the Department of Commerce, entered into six illegal contracts with a consulting firm to help manage the grant funds, according to various audit reports.

The governor’s office asked for an operational pause on the RISE program in February 2018 while it reviewed the contracts. Auditors also found that Commerce entered into seven contracts with four construction companies that were signed off on before getting HUD approval to use the funds. The pause wasn’t lifted until June 4, when Justice put James Hoyer, adjutant general of the West Virginia National Guard, in charge of RISE.

“I’m really looking forward to the near future to showing my side of that story,” Thrasher said. “The RISE program was marching right down the tracks and doing what it should exactly be doing. It was put to the side for political reasons and I think it was a huge mistake. Instead of the 50 homes that have been constructed, we would have had dramatically more homes constructed.”

Thrasher also took heat for a program called Excel, that teamed up the Commerce Department with current and former business executives to recruit new businesses and industries to the state. The program was discontinued when it was discovered that Steve Hedrick, the CEO of Appalachia Development Group, was allowed by the Commerce Department to be part of discussions with China Energy and even fly on state aircraft.

“That was dismantled by Bray Cary (the governor’s special assistant) and the governor under the guise of a conflict of interest that could have not been further from the truth,” Thrasher said. “Truth of the matter was that was an effective way of getting some really complicated things done at no expense to the state.”

“When Governor Justice appointed Mr. Thrasher as the Secretary of Commerce, the Governor, and all West Virginians, expected him to put the people of this state above his own interests. It’s sad that the opposite happened,” said Mike Lukach, Justice’s campaign manager. “Instead, Mr. Thrasher used his appointed position to travel all over the world on the taxpayers’ dime to promote the private companies of his friends, and at the same time, forgot about the RISE flood relief program and all the West Virginians still recovering from the 2016 floods.”

Filing for pre-candidacy allows potential candidates for office to test the waters and start fundraising efforts prior to the candidate filing period that starts Jan. 13 for the primary election filing period. With Thrasher entering the race, there are five Republican pre-candidates, including former Berkeley County delegate Mike Folk.

“The entrance of Woody Thrasher is an expected event,” Folk said. “However, it just proves that I am the only Republican with the fiscal responsibility and deep understanding of our state’s finances. His handling of flood relief only proves he is not the leader West Virginia needs.”