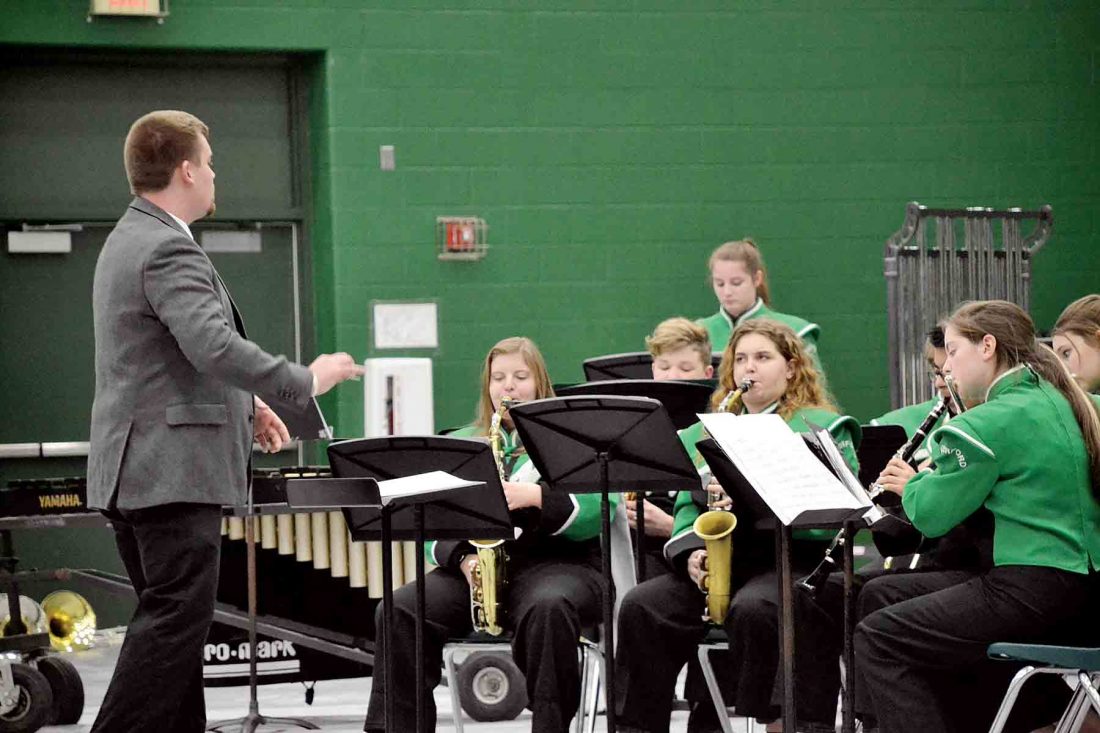 Photo by Michael Kelly Waterford High School band director and district music teacher Chase Myers directs the band during a concert at the elementary school Thursday night. The band, along with three others from the area, played for a set of judges in preparation for district competition.

WATERFORD — Music in school is more than meets the eye, Chase Myers says.

“A lot of times, what the community sees is only marching bands at parades or football games,” the Waterford High School music teacher and band director said. “But the students are actually learning notes and rhythms, learning how to express the parts of the music you hear. They spend weeks learning how to do it.”

Band music is more than marches, and Thursday night an audience at Waterford Elementary School got to experience the elegant, thoughtful and still stirring side of band. The Waterford High band, along with visiting bands from Crooksville, Morgan County and Maysville, played for judges from the Ohio Music Education Association as a run-up to the district competition in just over a week at John Glenn High School in New Concord.

“You get rated between one and five in the district,” Myers said. “One is a superior, and if you get a one in district, you go to state.”

Myers compared Thursday’s concert to a scrimmage before the real game — a chance for the band to play its work in public and receive critiques from expert judges.

The Waterford band was up first, with three pieces, including “Doppler Effect” by Sean O’Loughlin, a moody but uplifting piece with swelling and receding dynamics, a stark contrast to the march music normally associated with high school bands.

When the applause died down, the three judges spoke quietly to the students, each offering suggestions on ways to improve the performance.

As the next band lined up, three of the Waterford students talked outside the gym about the evening and their band experience.

Ben Trader, a sophomore who plays euphonium, said he was convinced to go into band by his elementary school teachers. “Now, what I like most about it is the friendships with the other band members,” he said.

Katelyn Huck, a junior alto sax player, said it was a leap for her.

“In fifth grade, I just wanted something new and I tried it,” she said. “This is such a small school, and we’re all really close. Being in band just makes your life easier.”

Alyvia Oliver, a sophomore who plays trumpet, said the band is like an extended family. She enjoyed the Thursday night performance.

“On a night like this, the audience feels a lot more engaged than when you’re doing marching band,” she said.

Parent Katie Starkey said her sixth-grade daughter has been taking music since kindergarten and expects to be in marching band next year. She’s played saxophone for the past two years.

“She’s become very interested in all sorts of music, she plays piano now and in the choir,” Starkey said. “It helps her learning, really opened up new areas for her.”

Myers said learning music has benefits beyond being able to play an instrument.

“It offers a ton of different things. I like to teach life lessons through music — responsibility, discipline, perseverance,” he said. “Music is the only thing that uses your full brain. It’s using parts of their brains they don’t normally use in classroom.”

The band has 18 musicians, and the music program has dozens more students in the lower grades.