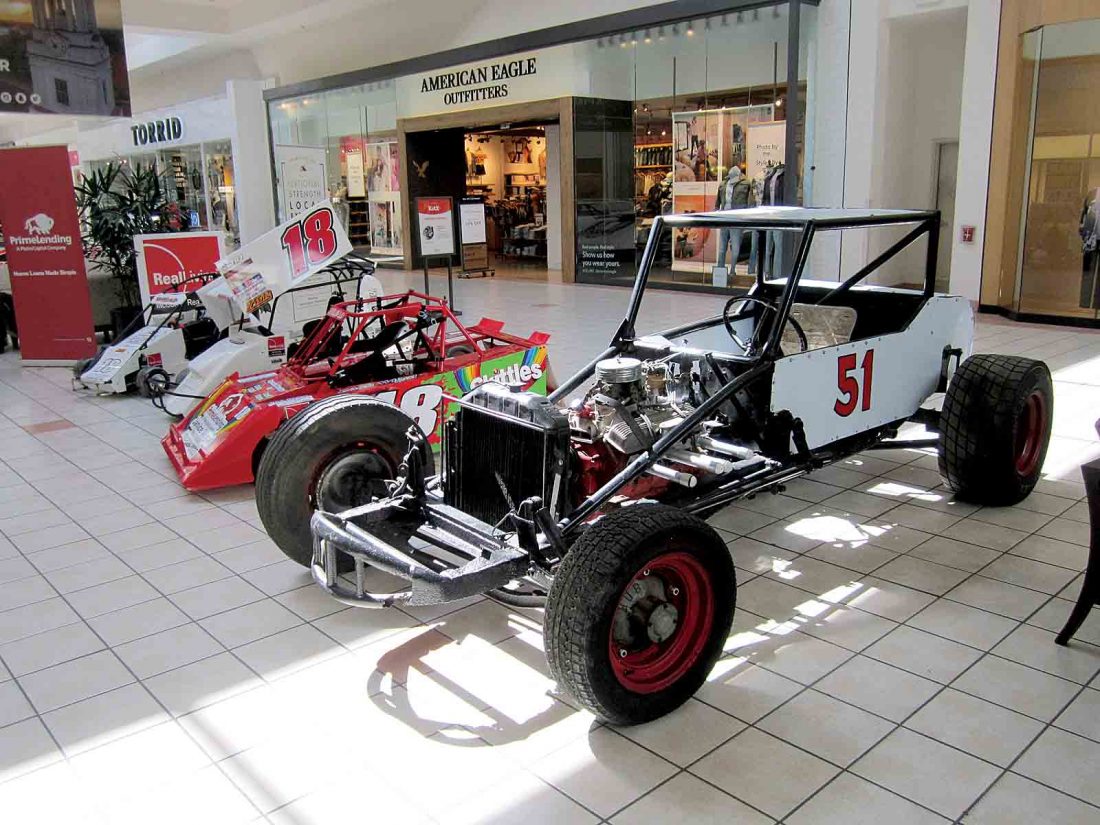 This race car from the 1950s is among 29 racers — old and modern — on display at the Grand Central Mall through Saturday. The car exhibit is being conducted by the West Virginia Racing Heritage Festival. (Photo by Wayne Towner)

VIENNA — Car-related activities are being held this week at the Grand Central Mall in Vienna.

Twenty-nine local race cars went on display inside the mall Sunday and can be viewed through the week in a display organized by the West Virginia Racing Heritage Festival.

In addition to the race car display, the mall also is hosting the annual Cub Scout pinewood derby races and an Autocross event, both on Saturday.

Ashley Ness, president of the board of directors for the Ritchie County Fairgrounds, said the cars on display through Saturday night include a racer from the 1950s and some from the 1960s and 1970s while the rest are modern cars racing at local speedways. There are also smaller wedge cars and mini-wedge cars which are driven by children.

“There’s been a tremendous response,” Ness said of the first couple of days since the race cars went on display and plans are being made to continue the event for the next five years.

Visitors this week have ranged from children to seniors, including one 95-year-old man who spoke with Ness for several hours about his memories of the local racing scene, including memories of seeing the 1950s car on display speeding around local tracks.

One of the goals of the exhibit this week is to raise awareness and interest in the fifth annual West Virginia Racing Heritage Festival and Reunion on Aug. 17-18 at the Ritchie County Fairgrounds/Pennsboro Speedway.

Admission will be free and gates will open at 9 a.m. each day. There will be a car show from 10 a.m.-2 p.m. Aug. 17. No racing will be involved, but there will be a parade of vehicles along with presentations and discusstions by retired racers and other activities. Exhibitors and vendors — especially those offering parts for those seeking to restore old race cars — are becoming a growing part of the event, he said.

“It is becoming quite the success,” Ness said of the August festival.

Preserving the history and knowledge of local racing is one of the primary goals of the festival and activities like the mall display, Ness said.

Through such efforts “the stories from these drivers are not being lost because we’re losing so many of them at a rapid pace. We just lost four of the old-timers just last week. It’s like ‘Wow, I’m glad we got some of those stories recorded so that now they won’t be lost,'” he said.

As part of this week’s activities, Ness said the festival is sponsoring some of the trophies that will be presented to the Cub Scouts at Saturday’s pinewood derby. He would also like to see some pinewood derby participation in the racing heritage festival in August.

About 300 area Cub Scouts will participate in the Kootaga District Pinewood Derby on Saturday. The race will be a qualifier for the Buckskin Council Championship in April in Charleston.

Also on Saturday, the autocross is being held by the Southern West Virginia Region of the Sports Car Club of America.

Jody Hopkins, the mall’s general manager, said the mall began hosting autocross events in 2018 which proved very popular. The series returns this year, kicking off Saturday, and he hopes to have a new one each third Saturday of the month through November.

Hopkins said one really interesting thing about the autocross event is the variety of cars which can participate. Some people use their daily driving vehicles while others use heavily-modified vehicles in a variety of classes.

The autocross is a timed event and doesn’t involve high speeds, so it is family- and spectator-friendly. On Saturday, the course will be set up in the parking area at the Sears end of the mall.

Registration for the autocross ends at 1 p.m. Friday and information is available online at www.swvrscca.org. Pre-registration is $30 for SCCA members and $45 for non-members. There is an 80-car limit and helmets and seat belts are required along with an on-site SCCA safety tech inspection.

The competition will start at 10:30 a.m. Saturday and run through the day until all registered vehicles have participated. There is no cost to watch, Hopkins said.

Hopkins is pleased with the timing and circumstances which brought all three events together at this time.