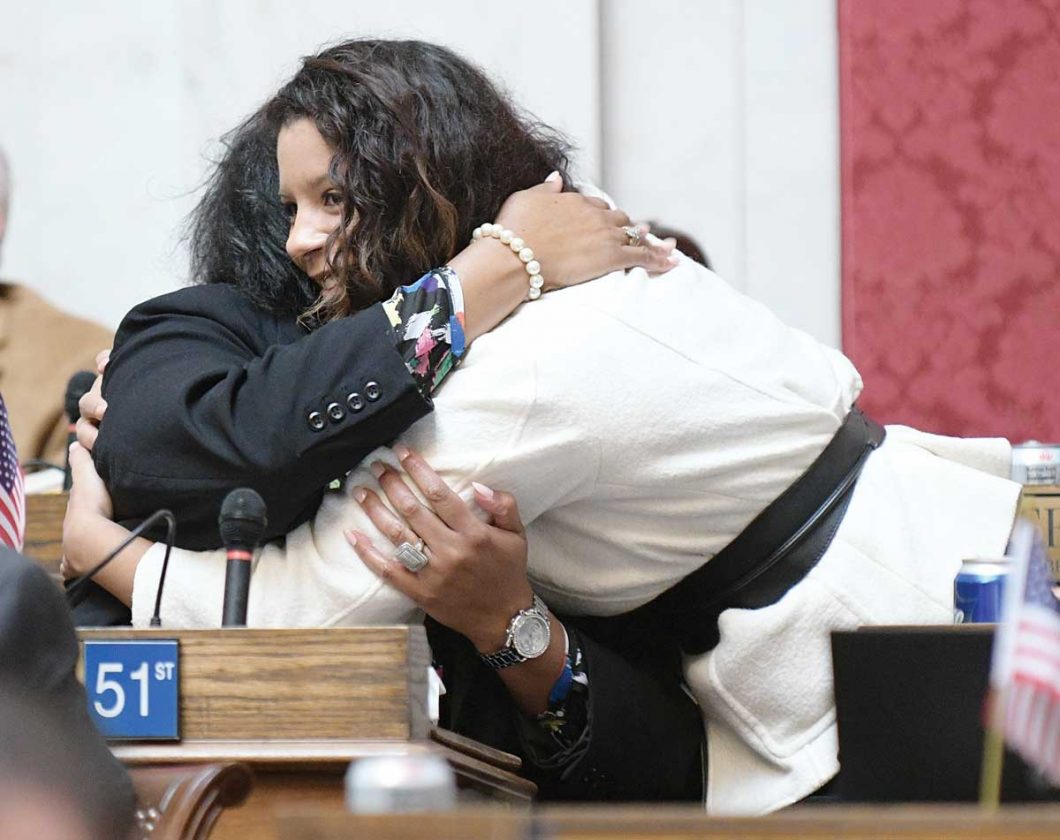 Photo courtesy of WV Legislative Photography From left, Delegates Danielle Walker, D-Monongalia, and Sammi Brown, D-Jefferson, hug after both spoke out against remarks made in a committee meeting by Delegate Eric Porterfield, R-Mercer.

CHARLESTON — Comments in a committee meeting by a freshman lawmaker sent shockwaves through the House of Delegates, culminating with a showdown Thursday.

During remarks on the floor of the House of Delegates Thursday morning, Delegate Eric Porterfield, R-Mercer, was singled out by several House members for remarks he gave the night before during a meeting of the House Government Organization Committee.

The committee was discussing an amendment Wednesday night to House Bill 2708, creating the Local Government Labor and Consumer Marketing Regulatory Limitation Act. The legislation imposes limitations on what ordinances cities are allowed to enact. Examples in the act include cities that try to increase the minimum wage or ban the use of plastic bags or plastic straws.

During the discussion of the bill, an amendment was offered by Delegate Tom Bibby, R-Berkeley, that would have prevented cities from enacting employment and housing non-discrimination acts, or EHNDA. According to Fairness West Virginia, which lobbies on behalf of lesbian, gay, bisexual and transgender West Virginians, 11 cities in the state have enacted EHNDA provisions.

Porterfield, when speaking for Bibby’s amendment, called LGBTQ activists “socialists” and said West Virginians should have the freedom to fire or deny housing to someone based on sexual orientation if they disagree with it.

“As legislators, I don’t think it’s our job to legislate behavior,” Porterfield said. “The LGBT is the most socialist group in this country. They do not protect gays.”

Citing Milo Yiannopoulos, a gay alt-right activist accused of being a white nationalist, Porterfield cited the name of Yiannopoulos’ 2015 campus speaking tour which uses a name that many in the LGBTQ community find offensive.

“This is the name of his tour, this is not what I named his tour, but he was on what he referred to as the ‘Dangerous F…….. Tour,” Porterfield said. “We cannot allow discriminatory bigots to determine how our citizens are going to live.”

Twice during the committee meeting points of order were raised regarding Porterfield’s remarks. House Government Organization Committee Chairman Gary Howell, R-Mineral, ordered Porterfield to be mindful of his words.

“To the member, I would ask you to tone it down and be very careful how you tread on this,” Howell said.

By Thursday, Porterfield’s remarks had been shared among other members of the House, who did not share his perspective.

Bibby, the author of the amendment, said his intent was not to discriminate against anyone, but to make sure city ordinances are consistent with state and federal law.

“That discussion went on in all different directions,” Bibby said. “If you look at the amendment on its text, all it did was ensure no city or county could make up a protected class that was already not part of federal and state law, pure and simple. The rest of it was pure discussion.”

A member of the government organization committee — Delegate Danielle Walker, D-Monongalia — said the remarks from Porterfield were hurtful to her, a black woman. But she was more hurt by the reaction of her son, who decided not to visit the state Capitol because of the comments from Porterfield.

“In the people’s house, my 17-year-old did not feel welcome because of one isolated instance,” Walker said. “Sticks and stones may break my bones, but words hurt deep inside.”