Photo courtesy of WV Legislative Photography The chambers of the West Virginia Supreme Court. Pending in the Legislature is a resolution from Senate Judiciary Committee Chairman Charles Trump, R-Morgan, for a Constitutional amendment in 2020 clarifying the Legislature has sole authority over impeachment proceedings. 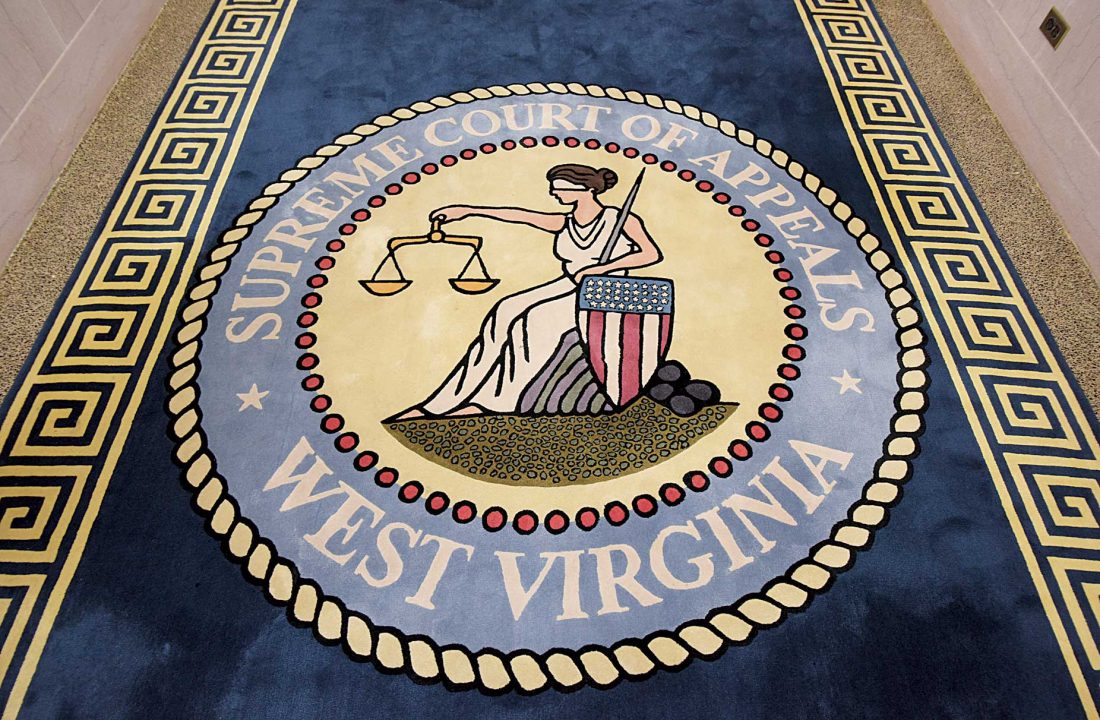 CHARLESTON — The West Virginia Supreme Court of Appeals, under new management, has worked hard to put rules and policies in place to fight the perceptions of corruption that plagued justices over the last year.

But the recent sentencing of former chief justice Allen Loughry on Wednesday to two years in federal prison was a stark reminder that some of the sores from the summer impeachment fight between the court and the Legislature have not completely healed.

Several pieces of legislation are working their way through the legislative process to reform the state’s highest court and restore the balance between the branches of government.

Senate Joint Resolution 5, introduced by Senate Judiciary Committee Chairman Charles Trump, R-Morgan, would put before the voters in 2020 a change to Article IV of the state Constitution making it clear as glass that the Legislature has sole authority over impeachment proceedings.

According to the resolution language, “No court of this state shall have any authority or jurisdiction, by writ or otherwise, to intercede in or interfere with any proceedings of the House of Delegates or the Senate hereunder; nor shall any judgment rendered by the Senate following an impeachment trial be reviewable in any court of this state.” 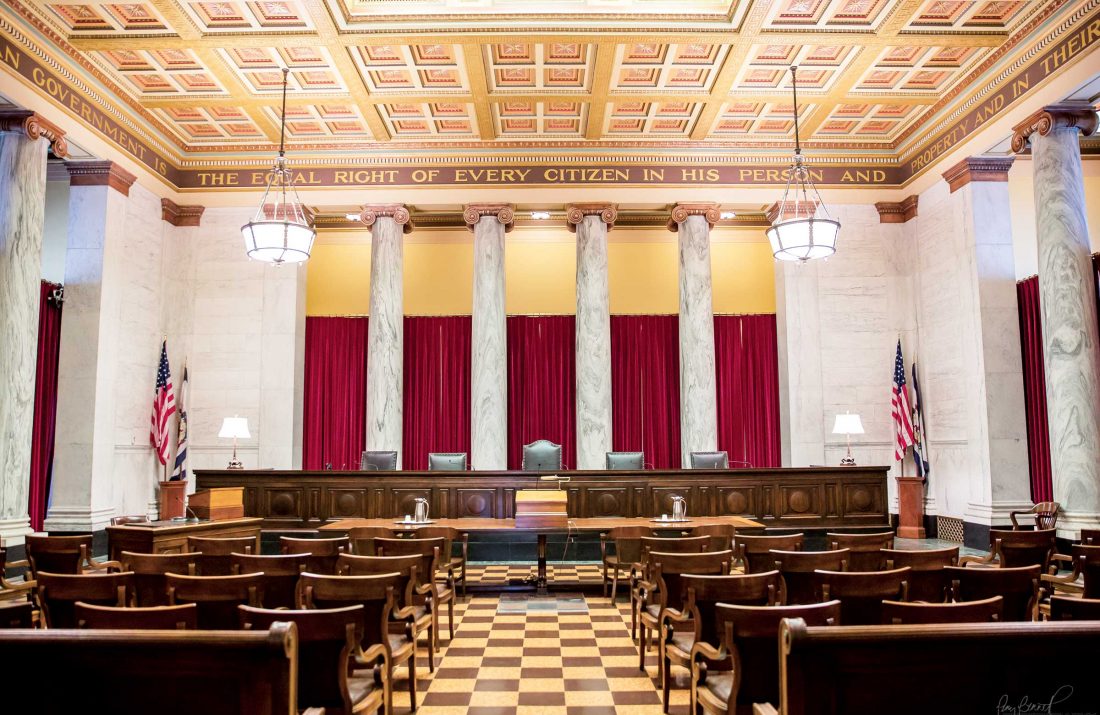 Photo courtesy of WV Legislative Photography The chambers of the West Virginia Supreme Court. Pending in the Legislature is a resolution from Senate Judiciary Committee Chairman Charles Trump, R-Morgan, for a Constitutional amendment in 2020 clarifying the Legislature has sole authority over impeachment proceedings.

Starting in June 2018, the Legislature was called into special session by Gov. Jim Justice to start an impeachment investigation of the justices of the Supreme Court of Appeals. The action was spurred by the federal indictment of then-justice Loughry on multiple charges. Since the fall of 2017, news reports, audits and a Judicial Investigation Commission report detailed misuse of public resources by Loughry for personal gain.

After a summer investigation by the House Judiciary Committee, the House of Delegates adopted 11 articles of impeachment against justices Loughry, Margaret Workman, Beth Walker and Robin Davis. Former justice Menis Ketchum announced his resignation shortly before the impeachment process and later pleaded guilty to one count of wire fraud in U.S. District Court for his use of a court-owned car for personal use. Davis resigned the day after the impeachment articles were adopted.

The acting justices ruled in a 3-2 decision Oct. 12 that the impeachment of Workman violated the separation of powers. The court also ruled that the House violated its own rules put in place to govern the impeachment investigation and vote. The ruling halted all remaining impeachment trials, though Loughry resigned in November when lawmakers considered holding a new impeachment process solely for him after he was convicted in federal court in October of 11 charges.

“Many of us felt that the substitute Supreme Court which issued the opinion in Workman v. Carmichael went way outside of its lane and violated the separation of powers,” Trump said. “Because they did, many of us here felt the need to clarify it.”

Before the start of the 2019 legislative session, the House filed a petition with the U.S. Supreme Court asking it to review the decision made by the state’s acting Supreme Court and to overturn it.

“We’re certainly hopeful the Supreme Court will accept the opportunity to review that decision and overturn it,” said House Judiciary Committee Chairman John Shott, R-Mercer. “We think it was clearly wrong and clearly an overstepping of the bounds of the constitutional separation of powers.”

Another decision handed down by the acting Supreme Court in October 2018 revolved around the compensation for senior status judges. Workman and former justices Loughry and Davis were all impeached for a scheme to pay senior status judges — retired judges who fill in on benches across the state — more than what state code allowed.

During the Workman impeachment appeal, the acting supreme court ruled the Legislature did not have the authority to decide on the internal policies of the court. But Senate Bill 398, also introduced by Trump, would re-establish the Legislature’s authority to set compensation for judges, including senior status judges.

“It’s a section the gives life to the legislature’s constitutional authority to set salary and compensation for members of the judiciary,” Trump said. “We believe, have always believed, that includes compensation for judges or justices who are retired and assigned on a temporary basis to serve us around the state. We think that was wrongly decided. We would like for you, the real Supreme Court, to look at it and make a decision on it.”

Trump stressed that these bills are not a reflection on what the current state supreme court has done to address the issues raised by the impeachment process. On Feb. 4, the court announced the adoption of several new polices, including a travel policy, rules for using information systems and computer equipment, asset management and inventory, rules for state purchasing cards, and general accounting policies.

“I’d be remiss if we didn’t start out any such conversation that the significant efforts that have been made by the Supreme Court already in terms of their own budget self-examination, and the costs of operations of the judiciary,” Trump said. “It’s absolutely clear to me that they’ve taken that very seriously and worked hard at it, the adoption of new policies and procedures. They’ve clearly spent a lot of time thinking about that and working on it and have now adopted a bunch of new policies and procedures.

“I want to compliment them and commend them for they’ve done,” Trump said. “It’s definitely warranted that they be recognized for the effort and progress they’ve made.”

Both SJR 5 and SB 398 have passed the Senate and are now being looked at by the House.