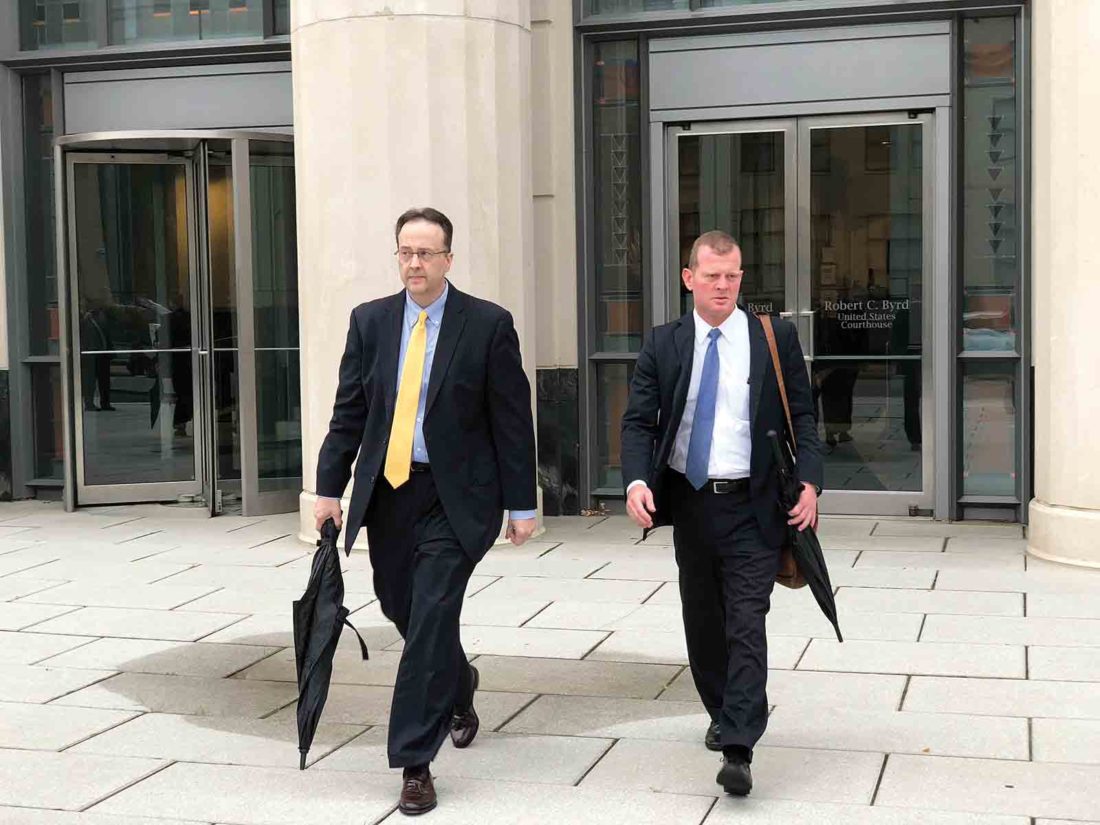 Photo by Steven Allen Adams Justice Allen Loughry, left, and attorney John Carr leave for the day Wednesday after the jury recessed until this morning in Charleston.

CHARLESTON — After a morning filled with last-minute appeals by the prosecution and defense, the jury determining the guilt or innocence of Allen Loughry, a justice of the West Virginia Supreme Court of Appeals, began its deliberations Wednesday afternoon.

After about an hour of instructions from U.S. District Judge John Copenhaver, the jury was dismissed to start its deliberations.

The jurors will return to the Robert C. Byrd Courthouse today at 9:30 a.m. to continue their deliberations.

Assistant U.S. Attorney R. Gregory McVey gave the closing statement to the jurors Wednesday morning. He told the jurors that Loughry let the prestige of the office of Supreme Court justice infect him.

McVey went into the particulars of each charge. Loughry is accused of defrauding American University and the Pound Civil Justice Institute by claiming mileage reimbursements for his trips in a state vehicle to Washington, D.C. and Baltimore, Md., in 2013 and 2014.

He is also accused of using the state fuel card to make gasoline purchases for state vehicles 15 times on trips that were personal and not for state business. Loughry called the records used by the prosecution to prove this use a “mess.”

“Pay particular attention to the records,” McVey said. “Those records are not a mess.”

In prior testimony, Loughry admitted that several of his trips were to Tucker County — where his parents reside — and that no trips were for personal business. The prosecution showed that many of Loughry’s fuel-ups with the state car occurred over holidays and weekends.

During the defense’s closing argument, Loughry attorney John Carr told jurors that the evidence brought by the prosecution was not enough to convict his client beyond a reasonable doubt.

“The evidence in this case is not sufficient,” Carr said. “The question is whether Justice Loughry is guilty of the 22 crimes he is charged with.”

Carr said the desk at Loughry’s home that was state property was there because former court administrator Steve Canterbury sent it to Loughry’s home. He also said that, despite the testimony of others, his client did not believe the desk was an antique Cass Gilbert desk, one of the original desks purchased in the 1920s for use by the court.

Carr also dismissed the evidence that Loughry attempted to plant false testimony in the mind of Kim Ellis, the director of administrative services for the court. Loughry is accused of trying to convince Ellis that they had a conversation years ago about how much he wanted his office renovations to cost.

“He didn’t try to tell her anything,” Carr said. “It was a question. It was dropped. There is not a follow-up question. It’s not witness tampering. It’s people trying to find out what happened.”

During a rebuttal to the defense’s closing statement, Assistant U.S. Attorney Philip Wright referred to Loughry’s book, “Don’t Buy Another Vote, I Won’t Pay for a Landslide.” The book focuses on political corruption in West Virginia.

“It mentions that people have to have confidence in the judiciary,” Wright said. “He betrayed his own words. Find him guilty.”

“There is an old saying that power corrupts,” Wright added. “(Loughry) is a walking, talking example of that.”