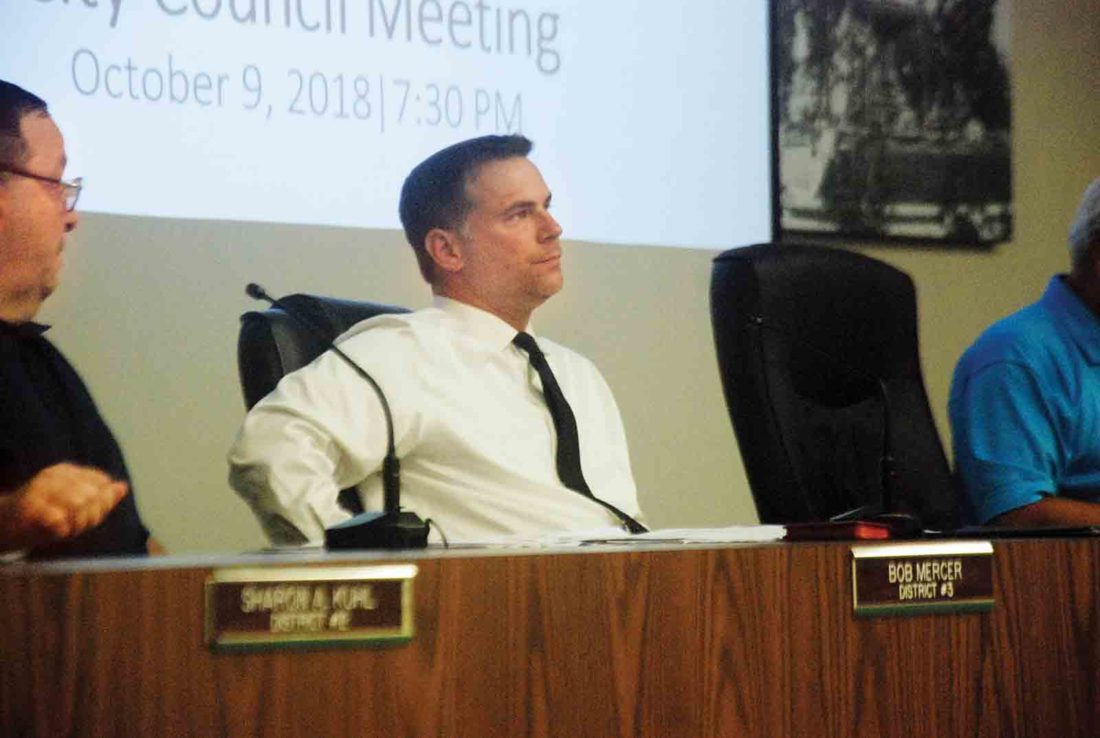 Parkersburg City Councilman Eric Barber is shown during Tuesday’s council meeting at the Municipal Building. Barber did not comment during or after the meeting on criticism from citizens directed at him over a Facebook comment in which he wrote “better get you’re coathangers ready liberals” in reference to Brett Kavanaugh’s impending confirmation to the U.S. Supreme Court. (Photo by Evan Bevins)

PARKERSBURG — Parkersburg City Councilman Eric Barber’s recent social media post drew a great deal of criticism at Tuesday’s council meeting, on the same day a city resident filed a defamation lawsuit against Barber for claiming in an online post that the other man might be a pedophile.

Barber’s Facebook comment in which he wrote “Better get you’re coathangers ready liberals” in response to news of now-Supreme Court Justice Brett Kavanaugh’s impending confirmation was screen captured and widely shared over the weekend, appearing on websites for Newsweek, The Hill and more. While Barber has said the “poorly worded and insensitive at best” comment was in reference to a protester throwing a coat hanger in his face in Washington, D.C., after Kavanaugh’s nomination was announced, most people took it as a reference to dangerous abortions performed before the process was legalized by the 1973 Roe v. Wade decision.

“This despicable post infuriates me to the core of my being because I have (a) personal connection to a person who had a coat hanger abortion,” Parkersburg resident Sue Ellen Waybright said. “It has been reshared thousands of times from Florida to Canada and all points west, and none of those shares paint a positive picture for the City of Parkersburg and its residents.”

Meanwhile, a suit was filed against Barber Tuesday in Wood County Circuit Court by Parkersburg resident Douglas Evans, saying Barber defamed him in a Sept. 14 Facebook post by alleging Evans “may be one of the many gay men who enjoys watching pre puberty boys perform in drag shows.”

The comment was made on the Facebook page of radio personality Tom Roten, who posted a link to a video about an 11-year-old boy who performs in drag. Evans disputed Roten’s comment that the parents allowing the child to participate in such activities and activism is a form of child abuse. 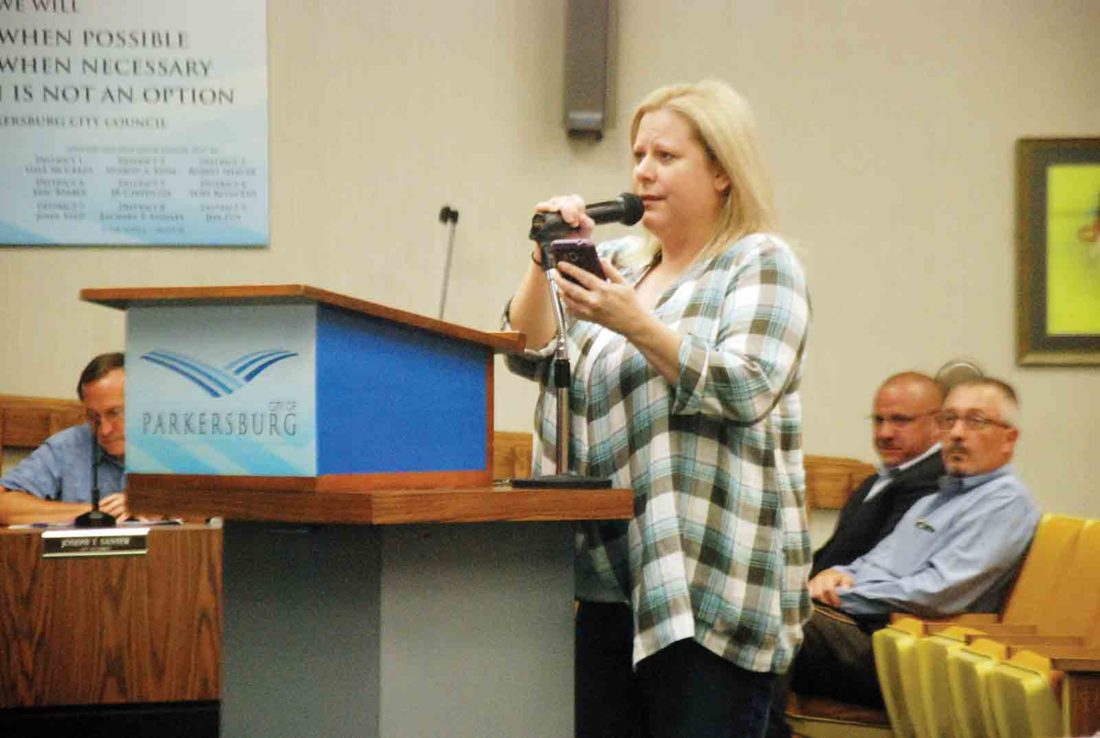 Parkersburg resident Caroline Martin was among multiple speakers during Tuesday’s public forum at the Parkersburg City Council meeting to speak against a controversial Facebook post made by City Councilman Eric Barber. “I’m so tired of feeling embarrassed about where I live,” Martin said. (Photo by Evan Bevins)

Barber, who the lawsuit says knew Evans from when Evans spoke at a council meeting in favor of a rejected nondiscimination ordinance, commented that Evans “may be quick to defend this form of child exploitation” because he is excited by little boys “dressed in this manner.”

It claims Evans has suffered “loss of reputation in the community, public embarrassment (and) humiliation” and the remarks adversely affect his ability to perform his job seeking out and communicating with potential donors for Marietta College, as well as potential future employment. It asks for a jury trial and damages as determined by a jury.

Told about the lawsuit Tuesday, Barber said he was not surprised. 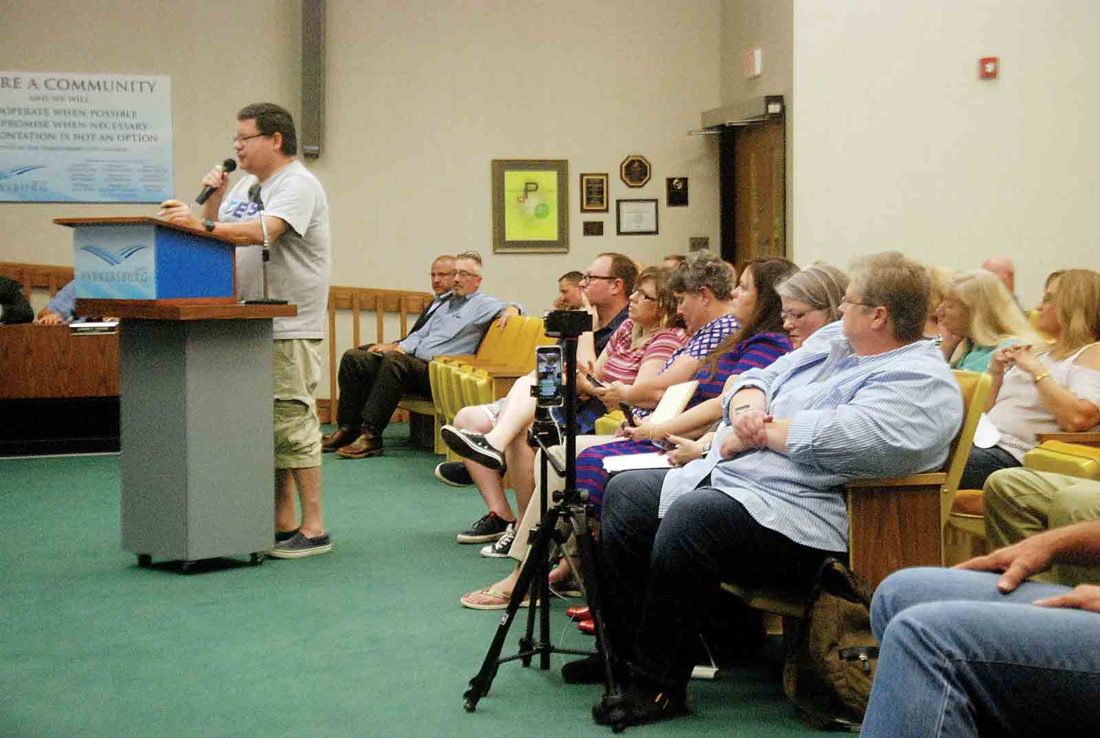 Parkersburg resident Russ Bowers, left, was one of more than 80 people who attended Tuesday’s City Council meeting and one of several asking council to take some action in response to a Facebook post by Councilman Eric Barber that has gone viral and drawn widespread criticism. (Photo by Evan Bevins)

Barber changed his party affiliation from Democrat to independent in 2017, citing what he called “anti-Christian rhetoric” from local party leaders during consideration of the NDO. He said one of the reasons he voted against the ordinance he originally sponsored was “the want and desire for liberals to use the courts as a tool of revenge.”

Barber declined to comment on the comment mentioned in the lawsuit, beyond saying “watching people defend the sexual exploitation of children is alarming to me.”

At the council meeting, the focus was primarily on Barber’s coat hanger comment, with Wood County Indivisible member Liz Hamperian saying she placed coat hangers at multiple locations outside the Municipal Building, although most of them were apparently removed by city employees.

Waybright renewed the call she made at the Sept. 25 council meeting for council to adopt a social media policy that sets forth standards of conduct for employees and elected officials.

During the council forum, Council President John Reed read a statement signed by seven members of council and the mayor, saying “the undersigned council members and the mayor emphatically disagree with a recent written statement made by Councilman Eric Barber of the 4th District.

“It is the feeling of the council members and the mayor … that we as a governing body remain separated from any divisive, inflammatory or repugnant statements made by Councilman Eric Barber and which are not reflective of the Parkersburg City Council, its mayor or the City of Parkersburg,” Reed said.

Barber did not speak after the statement was read.

Councilman J.R. Carpenter said he did not sign the statement because he disagreed with it being directed specifically at Barber and a single incident instead of being “generic for the future and future councils.”

Prior to the meeting, members of Fairness Parkersburg and Wood County Indivisible projected Barber’s words onto the exterior of the Municipal Building.

Barber did not comment on the subject during or after the meeting.