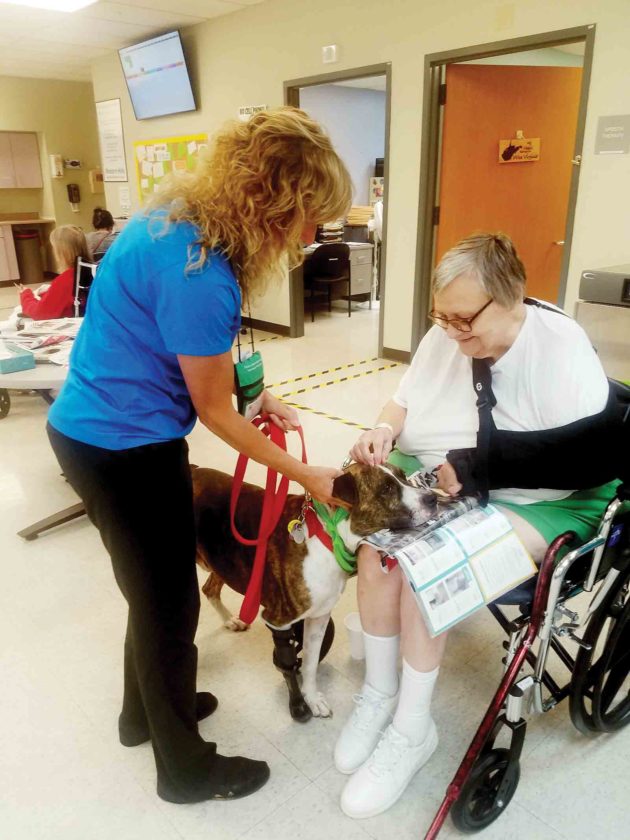 Nancy Miller, one of the owners of Miller Prosthetics & Orthotics, and her dog Keating, a certified therapy dog, visit with a therapy patient at Heath South Western Hills, Connie Urbach of Parkersburg. (Photo by Madeline Murphy)

“Keating was born without one of his legs in Chattanooga, Tenn., in May 2014,” said Nancy Miller, one of the owners of Miller Prosthetics & Orthotics.

Even though he is missing a leg, Keating is an active dog.

“In August of 2014, my husband, Mark Miller, a certified prosthetist/orthotist with offices in Belpre and Parkersburg, and I adopted Keating so that Mark could continue to make a new leg for him as he grew,” said Nancy Miller.

The Millers’ original purpose was to help Keating, but after seeing the positive reactions people had when they saw him, they decided to certify him as a therapy dog to help people, too. 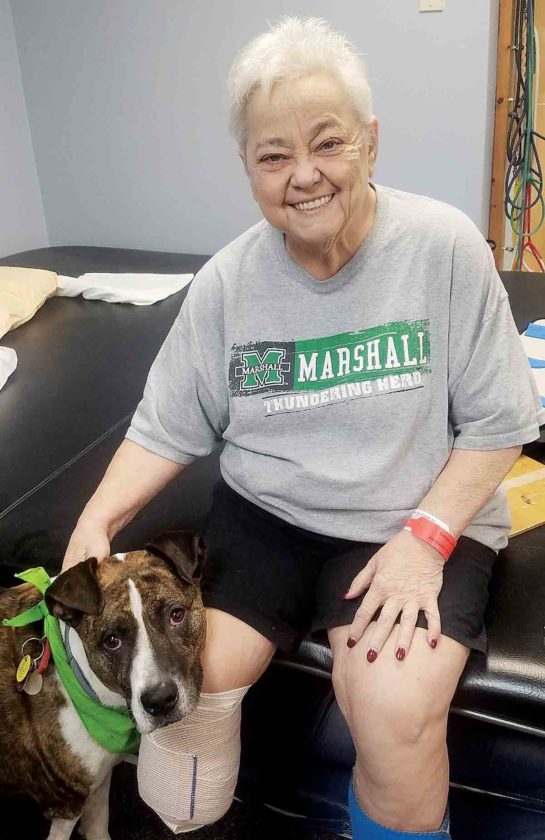 Joyce Varner, of Vienna, who recently had her leg amputated from the knee down, meets with Keating the therapy dog, who was born without one of his legs. (Photo by Madeline Murphy)

“Keating has a way of giving new amputee patients hope, and that is so important,” said Miller

Keating was certified to be a therapy dog in June 2016.

“Within a week of his certification, we took him to a National Amputee Coalition Conference in Greensboro, N.C. The response from attendees with limb loss was so overwhelming, that we decided to share him with the community even outside of the office,” said Miller.

Keating makes weekly trips to see people at Belpre Landing and at short-term rehabilitation centers such as Health South Western Hills in Parkersburg.

He has also been to both hospitals in the area and a variety of doctors offices, Nancy Miller said.

“I was devastated when I found out that I would be losing my right leg from the knee down,” said Joyce Varner, a patient at Health South.

Varner said her leg had to be removed due to poor circulation caused by diabetes.

While visiting the Health South patients and meeting Varner, Miller was able to explain how a prosthesis is made.

“We will scan your leg with a 3-D scanner that sends the image to our computer, so that we can customize the prosthetic and fit it better to your leg,” said Miller.

As Miller continued to explain the process of how the prosthesis will be made to fit Varner, you could see Varner’s expression grow more excited.

“It will be different for sure, but I am tickled to death,” said Varner.

“I know that if Mark can do such a beautiful job for not only people, but animals as well, then my leg and I will be in great hands,” said Varner.

“I enjoyed getting to meet Keating,” said Connie Urbach, another patient at Health South.

Urbach said the visit from Keating brightened her day.

Besides visiting patients, Keating also connects with the local community to educate people about prosthetics.

Keating recently attended WVU Medicine’s Health & Wellness Day at Grand Central Mall, the Senior Expo at Grand Pointe in May and a senior event at Putnam Howe Village in Belpre in June.

“He has visited students at Mineral Wells Elementary School and the Humane Society’s Camp Ruffin It, and was able to introduce the children to limb loss and how prosthetic legs work,”said Miller.

Keating is part of the Belpre Prosthetic Users Group, organized to reach out to and empower people affected by limb loss to achieve their full potential through education, support and advocacy, and to promote limb loss prevention, according to its website.

Keating attends the Prosthetic Users Group meeting, which is held on the second Tuesday of the month at 6:30 p.m., usually at the Millers’ Belpre office, 2354 Richmiller Lane.

For the last two years, Keating has visited the Amputee Coalition’s summer camp for children with limb loss at Camp Joy in Clarksville, Ohio.

“This past year, one of the campers said she still had Keating’s card from the previous year. She carries it around in her wallet and brought it with her to the camp. She said that whenever she gets sad, she looks at the card and thinks ‘If he can do it, I can do it,'” Nancy Miller said.