Officials: Debris found at Fenton site must be removed 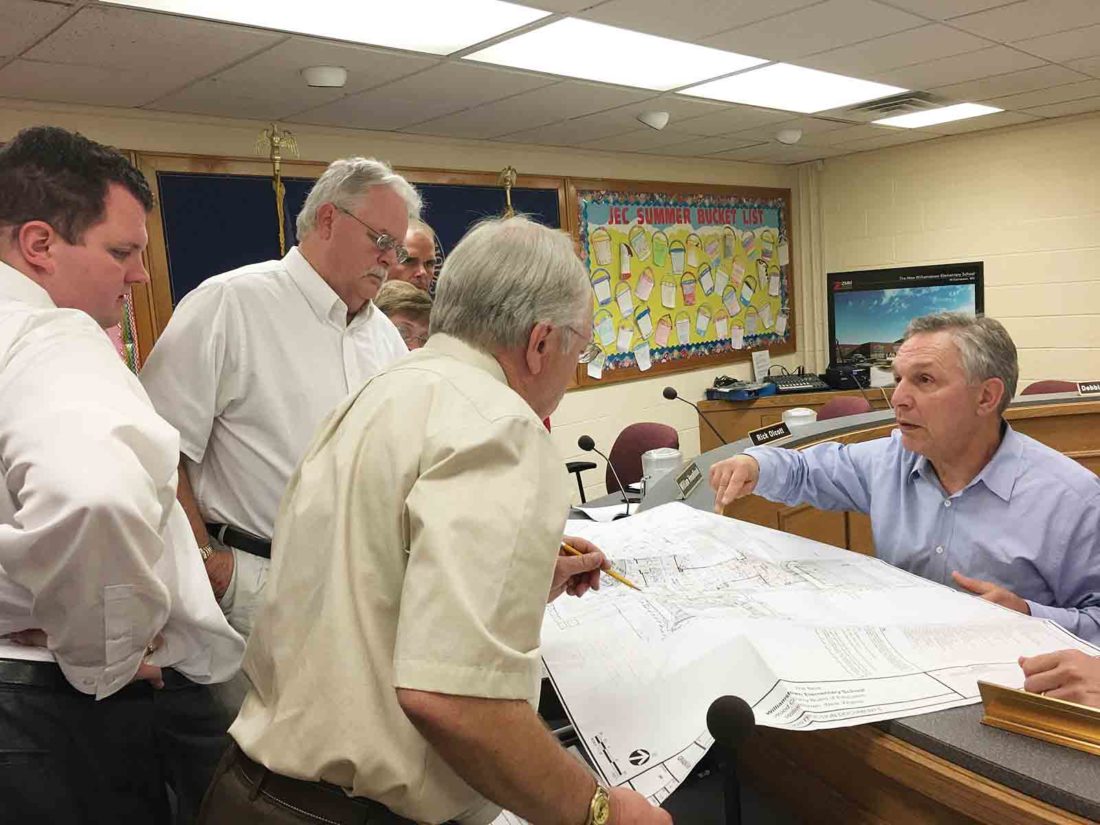 Ron Potesta, the head of testing company Potesta, shows a map of the planned Williamstown-area elementary school Tuesday to the Wood County Board of Education. (Photo by Michael Erb)

PARKERSBURG — A batch of glass cullet discovered beneath pavement at the site of the former Fenton Art Glass plant could potentially delay construction of a new Williamstown-area elementary school and will certainly increase the price.

Information was presented Tuesday evening to the Wood County Board of Education by officials with architectural and engineering firm ZMM, which is overseeing the project, and Potesta, the company which conducted soil and water samples at the factory when it was being considered as the site of the new elementary school.

Officials said during demolition, three areas of concern were found on the Fenton site, including one where the soil was too soft and needed replaced and another area where construction debris from a prior project was found underneath pavement.

A third area, however, contained “unfired cullet” and is located where part of the new school school will rest.

“Cullet is glass, and it’s not a big problem,” said Ron Potesta, the head of Potesta. However, “if it is unfired cullet, you could have some metal contamination.”

Potesta said the Fenton glass was colored using powdered metals, which included heavy metals such cobalt, arsenic and lead which have been proven to be dangerous to humans.

“The exposure of the metals is not any vapor that comes up from the soil. It’s if someone inhales it or ingests it,” he said.

Potesta presented three options to the board Tuesday, all of which have been reviewed by the West Virginia Department of Environmental Protection.

∫ Option 1 would be removing all of the cullet and relocating it on-site to a cement vault which was discovered after the property was purchased. Assistant Superintendent Mike Fling said the vault has a capacity of about 200,000 gallons. The vault would then be sealed under a parking lot. That option would cost about $190,000, officials said.

∫ Option 2 would be removing all of the cullet and sending it somewhere else to be disposed. Depending on whether the material could be disposed of in-state or out-of-state, this option could cost anywhere from $400,000 to $1 million.

∫ Option 3 would be to remove only a portion of the cullet, about 4 feet. The cullet removed would be placed into the cement vault and sealed. This was the cheapest of the options presented at about $100,000.

All of the options are “protective of human health and environment, but they all have different costs associated,” Potesta said. “Even the option of where you only remove four feet of it, you are putting four feet of soil on top of it and the concrete slab of the building on top.”

The board made no decision Tuesday evening, but said it would give direction this month. Officials warned any delay of more than a few weeks could negatively affect the construction project. The new school is scheduled to open in the fall of 2019.