Photo by Doug Loyer One of the main events of the Harmar Days Street Festival was the turning of the Historic Harmar Bridge.

Photo by Doug Loyer The “Minneapolis,” a steam powered tractor, drew many spectators during the Harmar Days Street Festival.

Photo by Doug Loyer Sara Chichester played the bagpipes throughout the festival. 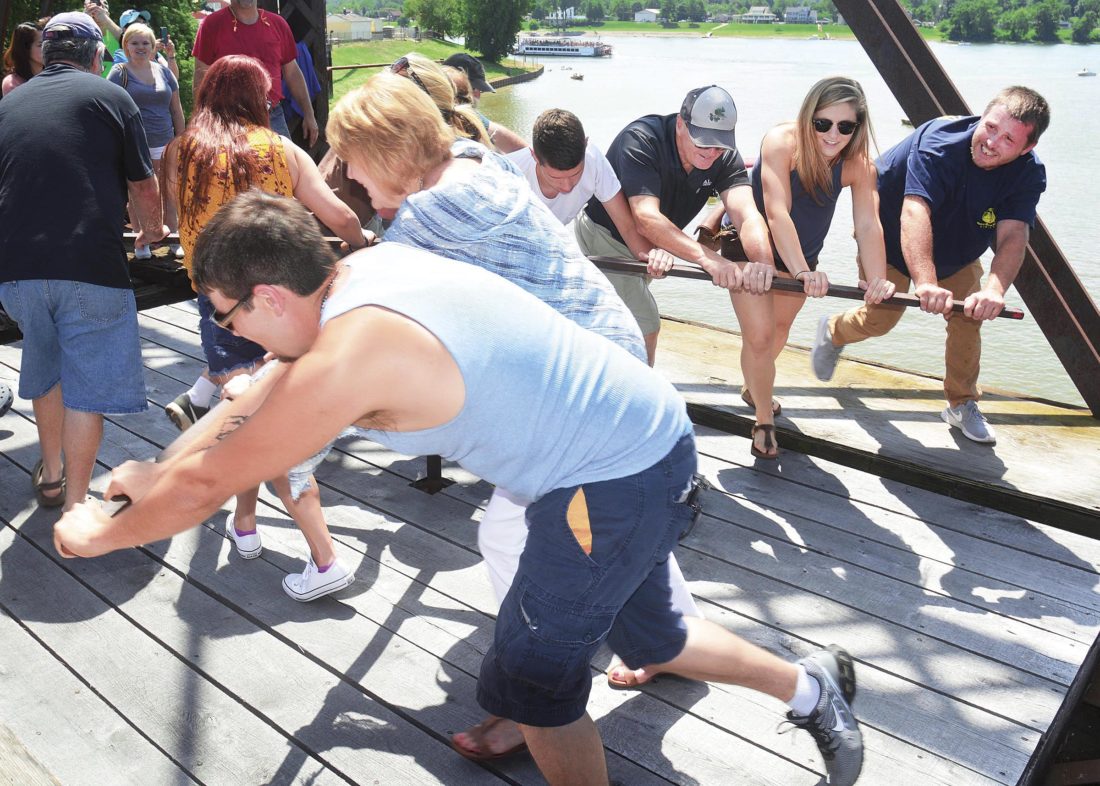 Photo by Doug Loyer One of the main events of the Harmar Days Street Festival was the turning of the Historic Harmar Bridge.

MARIETTA — With the sounds of steam engines and old river boat whistles filling the air, the Harmar Days Street Festival was held in Harmar Village on Saturday and Sunday.

In a laid back atmosphere, the festival goers themselves were able to let off a little steam and stroll along Maple Street, stop in the shops, get a bite to eat and just take a little time to appreciate a few things from a bygone era.

Many enjoyed the festival by walking across the Historic Harmar Railroad Bridge, seeing old steam engine tractors, getting an opportunity to blow old steam boat whistles and learn about spinning yarn.

Also featured during the Harmar Days Street Festival was the Great Cagney Railroad Stem Train that gave rides to kids, the Busy Bee Food Truck, Uncle Dan’s Ice Cream, crafter and food vendors, a flea market and all day street entertainment. On Sunday, the Classic Car Show was held on the banks of the Muskingum River.

The Historic Harmar Railroad Bridge was also turned during the festival. The turning of the bridge is done by hand with a large wrench with four arms. Twelve people had the privilege of turning it. Historically, the bridge was turned to let large boats pass through. For effect, the Valley Gem passed through as the bridge was opened. 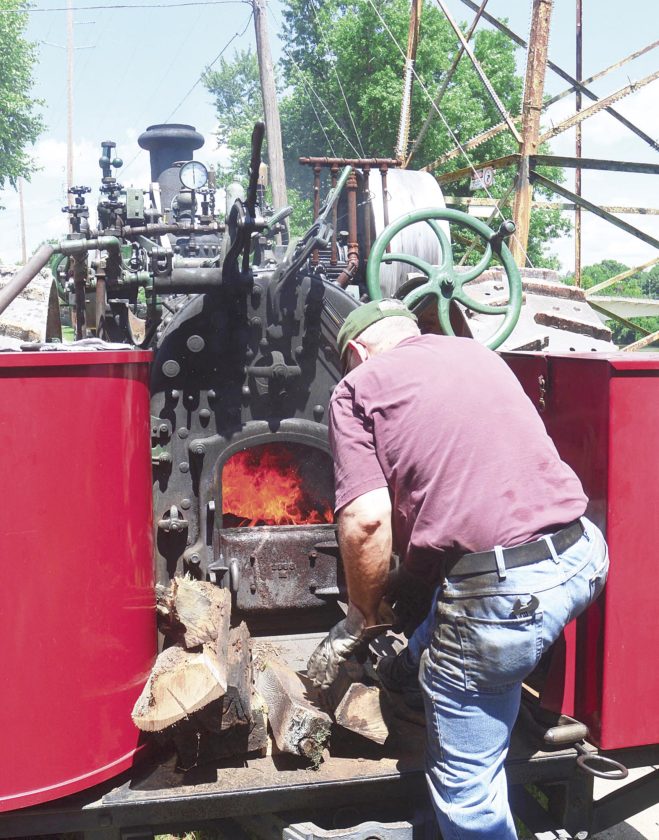 This year the turning of the Harmar Bridge was dedicated to Brooks Harper’s life and service. Harper passed away in April. He had a passion for the Harmar area and he guided the Historic Harmar Bridge Company for more than 30 years. During a brief ceremony, he was honored with a plaque on the bridge this weekend.

Grandson Jason Harper said his grandfather was an amazing man, accomplished a lot, but always had time for them.

“I couldn’t have asked for a better upbringing,” he said. “He instilled a moral compass in us.”

Another grandson, Stephen Harper, shared that when he was little, he used to go into his grandfather’s store and get free jelly beans out of the jars. He has many fond memories.

“He was one-of-a-kind,” said Stephen. “It’s nice that they dedicated the bridge turning for him and the plaque on the bridge is really nice.”

The original Harmar Bridge was built in 1856 and was rebuilt four times because of floods. The worst flood was in 1913 which put the water level about 10 feet about the railroad tracks. Turning the bridge open takes almost 22 revolutions.

A large crowd was on hand to experience the bridge turning and soak up historical information shared by railroad and steam engine enthusiast Rob Hilburn of Mt. Vernon, Ohio.

“I enjoy this,” said Hilburn. “I’m from a family that is really into history and my friends as well.”

Getting some first-hand experience at turning the bridge was Jack Grzesik of Rhinelander, Wis., who was in town visiting his daughter.

“Turning the bridge was exciting. It was a nice part of our vacation to do this,” he said. “My daughter helped turn it too. We don’t have any revolving bridges where I come from. This was a lot of fun.” 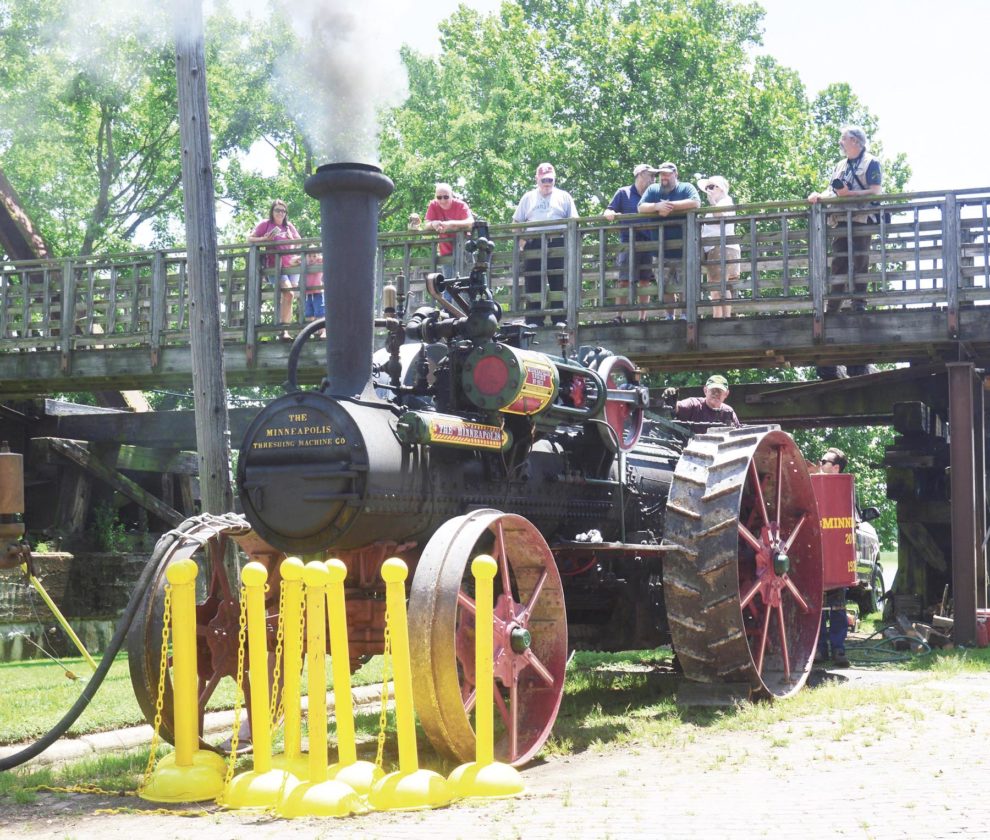 Photo by Doug Loyer The “Minneapolis,” a steam powered tractor, drew many spectators during the Harmar Days Street Festival.

James Higgins and his wife Joan, of St. Marys, saw the bridge turned for the second time as they took in the festival Saturday.

“I love it. It’s hard to imagine a section of bridge turning like this,” said Higgins. “It’s nice that they have an organization that keeps this bridge going.”

“I was kind of leery about this at first, but there’s nothing to it,” said Joan. “I like the history of all this.”

There was a special appearance during the festival of the 1922 Mighty “Minneapolis,” a steam powered tractor owned by Randy Shrider and of course there was the Ohio River Valley “Whistle Blow.”

“We’ve had a lot of big and little kids blowing whistles,” said Grady Smith, of Marietta, as he filled the fire box. “It’s really nice to watch young and middle aged people who have never seen a steam engine before and see it in action.” 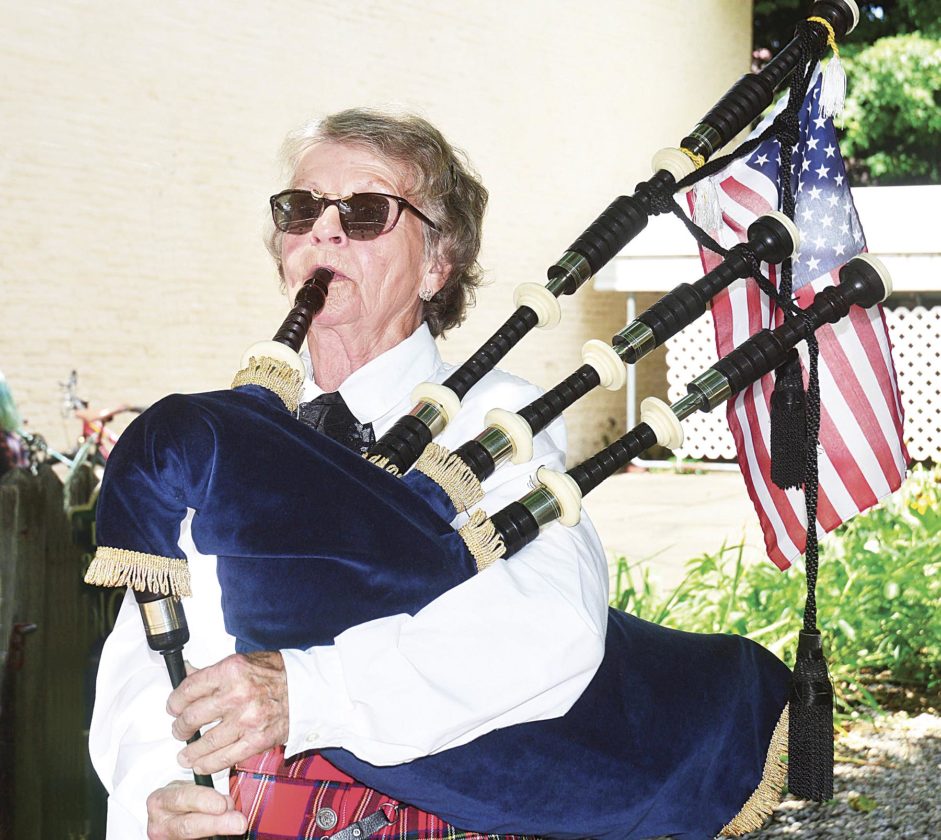 Photo by Doug Loyer Sara Chichester played the bagpipes throughout the festival.

John D. Fleming, of Marietta, admired the steam engines. He thought it was great that they hooked the engine up to the old steam boat whistles.

“I think this is fantastic to see part of history,” said Fleming. “The West Side is a good place, has good people, good food and also is a good place to watch fireworks from.”

Peyton Williams, 16, of Marietta, also enjoyed learning about the past. He got to experience both turning the bridge and blowing the whistles.

“I think it’s cool to see the old engines and hear the whistles,” said Williams. “This festival is one of the best I’ve seen around the Marietta area. It’s a lot different. There’s things here you don’t see everywhere else.”

Sara Chichester, of Lowell, walked around the festival and played the bagpipes. She’s been playing for 20 years with St. Andrews Pipes and Drum and also performs individually.

“I play the bagpipes for fun,” said Chichester. “This is a great small festival with a small town atmosphere.”

Jerad McKenzie and his wife Heather, of Marietta, enjoyed the festival with their three children; daughter Brooklyn, 8, and 4-year-old twin boys Mason and Drew. They said it was an amazing day and the kids really liked the train rides and walking across the bridge.