Photo by Doug Loyer The procession of students into the Dyson Baudo Recreation Center.

Photo by Doug Loyer Students enter for the Commencement Ceremonies in the Dyson Baudo Recreation Center on Sunday. 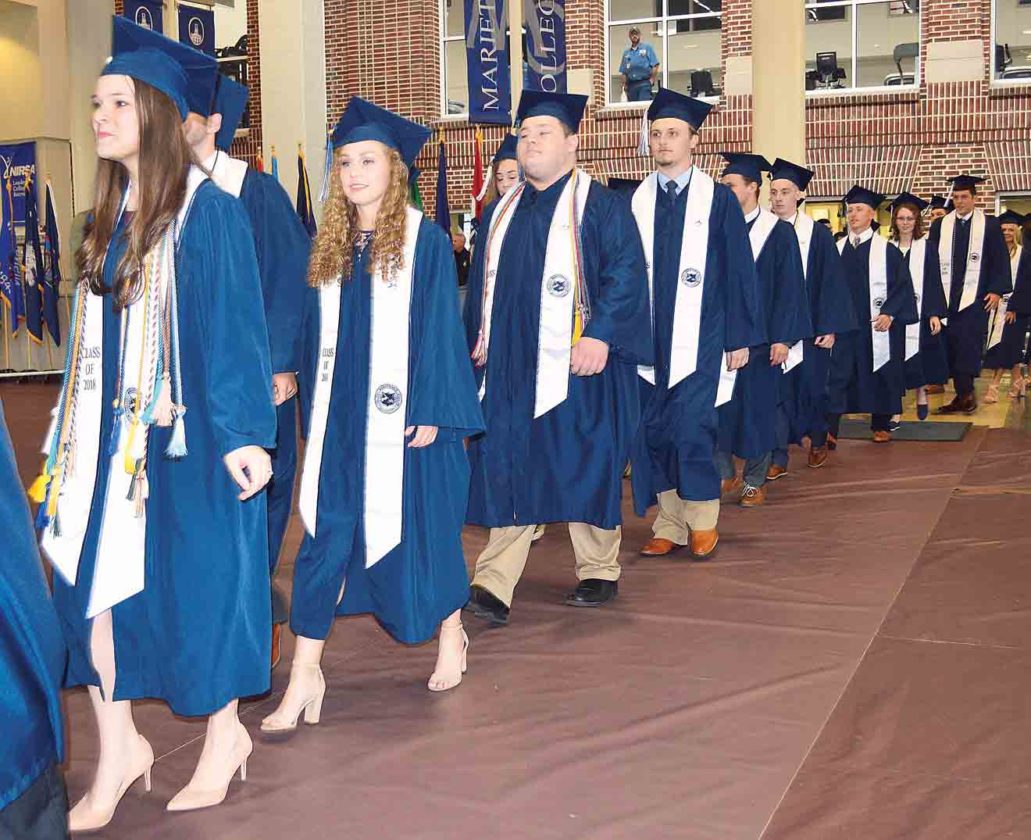 Photo by Doug Loyer The procession of students into the Dyson Baudo Recreation Center.

The “Long Blue Line” continued to get longer as 257 undergraduates received their diplomas along with five graduate students.

“We’re very excited for the graduates,” said Dr. William N. Ruud, Marietta College President. “They’re ready for the next chapter. Today, we’re graduating over 250 and we expect to get 375-400 students next fall.”

This was the first year that the graduates wore blue gowns, before they always wore black. They also wore stoles that they could decorate with Greek letters, pins or customize as they wished.

This years Commencement Speaker was Donald G. Ritter, a 1981 graduate of MC. He is the founder and CEO of Endurance Resources. He and his wife, Leslie Straub Ritter, also an MC graduate, each received honorary Doctor in Humane Letters during the ceremony. 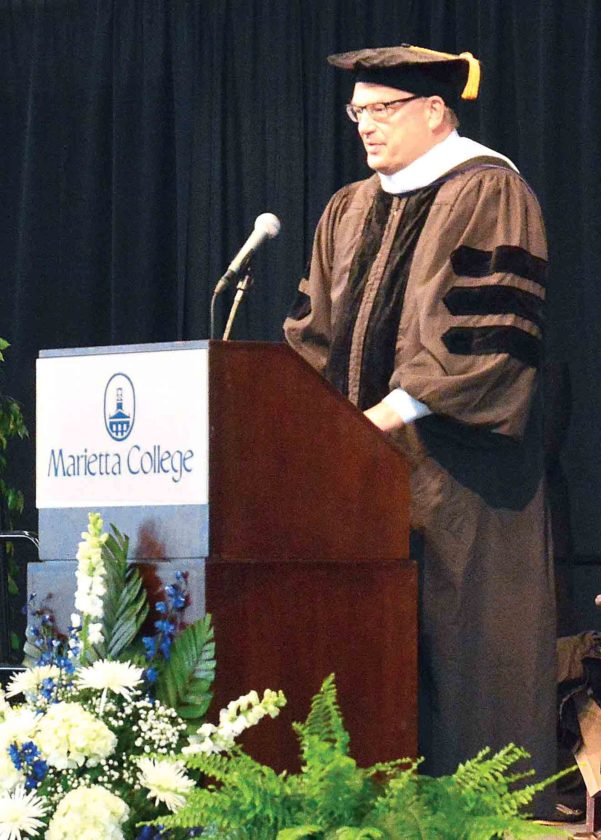 Evan Hensel, of Strasburg, Ohio, was this year’s Valedictorian. Hensel received a degree in Petroleum Engineering and a certificate in leadership Sunday.

“This is a bittersweet day,” said Hensel. “It seems like yesterday that I was moving in as a freshman. I spent the past four years making this college and the city of Marietta my home. This is a wonderful community with a lot of support.”

Hensel will be heading to Houston, Texas, for a couple of weeks of training and then on to New Orleans. He will be working off shore.

As far as words of wisdom for underclassmen, Hensel offered, “Be the one asking all the questions in class and don’t be afraid to spend time on Front Street on the weekends.”

The Jewett Orations were given by Balfour Nkrumah-Ababio, who won first place with his speech, “Our Kente Experiences” and Samantha Welch, who earned second place with her speech titled, “Oh, You Don’t Know the Places You’ll Go!” 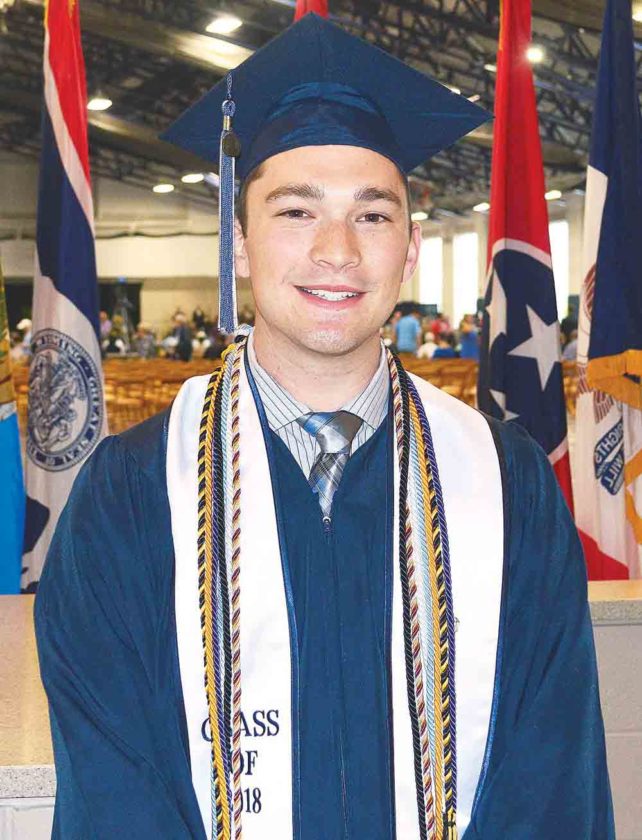 “I’m happy and excited today,” said Nkrumah-Ababio. “There’s something tangible now. Four years have culminated into this moment that we can all enjoy and celebrate everything we’ve been through.”

Nkrumah-Ababio said he will be working for MC for a year and then plans to go to grad school after that.

“It feels good to graduate, but it’s also really surreal,” said Welch who is from Montana. “It goes by really fast when you’re doing it, but looking back, so many things happened. I don’t think it will really hit me until I walk across the stage.”

Welch said she is trying to figure out what to do next and that’s what her speech was about. She plans to follow her instincts. She said MC has given her a great education and she feels prepared for her next step.

“It’s exciting to graduate today,” said Justice Held, of Pickerington, Ohio, who received a degree in Early Childhood Education. “These last four years have been amazing here at Marietta College. I’m grateful for my opportunity and my education here.” 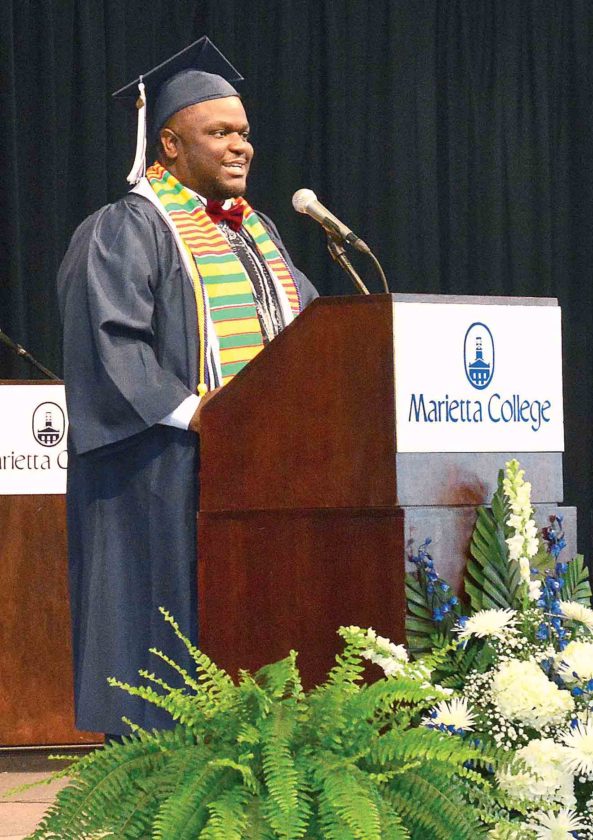 Justice plans to go back to Columbus and be a teacher. Her mother, Heather Held, said, “I’m unbelievably proud of Justice! Marietta College has been amazing for her. She couldn’t have had a better experience!”

“I am so proud of her for following her dreams and fulfilling them,” added Justice’s grandmother, Mary Beth Rush. “Marietta has given her so many opportunities and I think she has a bright future because of it!”

Mitchell Houston, of Youngstown, Ohio, who received a degree in Petroleum Engineering and Math shared that he plans to work in Marietta. Houston said the time has gone by really fast, but was very enjoyable.

“It feels really good to graduate today because it’s culminating the experiences over the past few years into one event,” said Eric Wilken, of Cincinnati, who majored in Math.

“It’s nice that I’m moving on and taking those accomplishments from here with me,” said Wilken. “I plan to take a gap year and then go for my masters in statistics.” 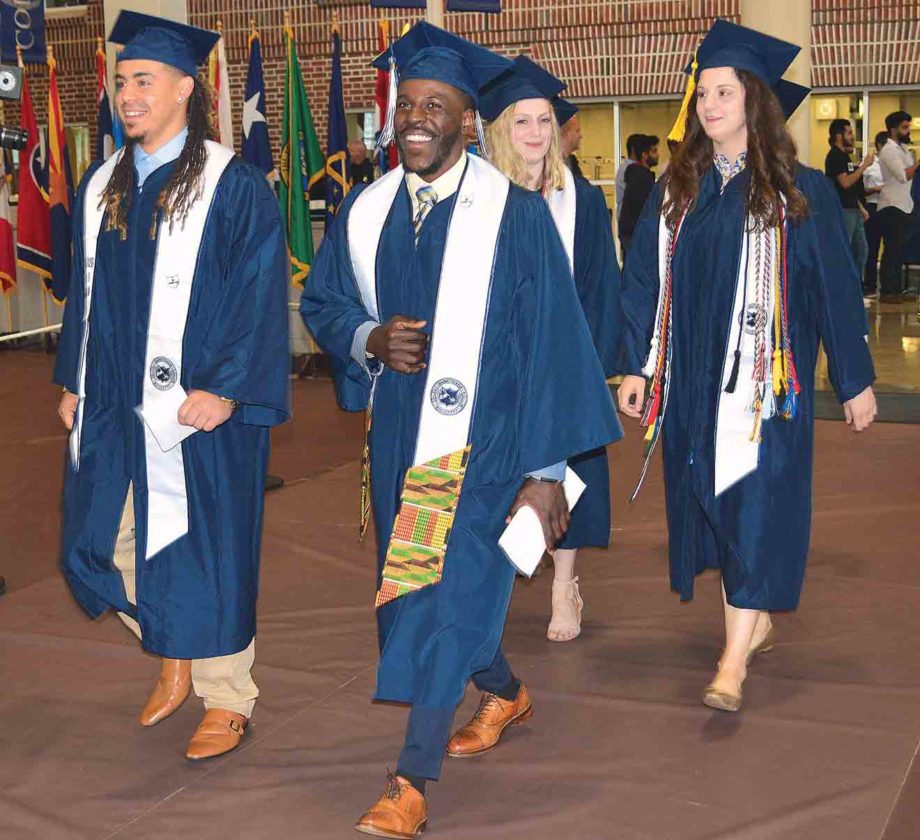 Photo by Doug Loyer Students enter for the Commencement Ceremonies in the Dyson Baudo Recreation Center on Sunday.