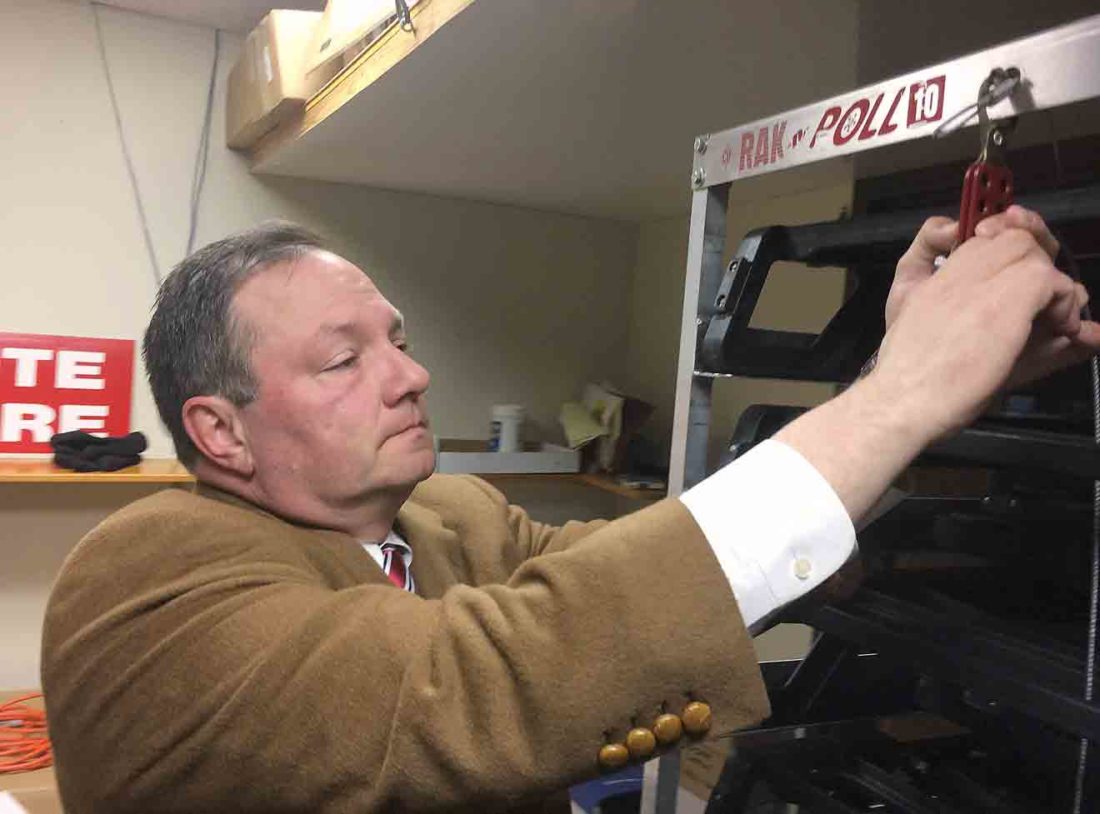 Photo by Brett Dunlap Wood County Commission President Blair Couch Thursday inspected voting machines, making sure they were locked and secured prior to the start of early voting Wednesday.

PARKERSBURG — Wood County is ready for the primary election and early voting that begins Wednesday.

“All of the equipment is ready,” Rhodes said. “The voting machines are ready.”

A public test of the tabulator will be held this week. Rhodes said there is new software officials of which the training was only available Friday.

Early voting will start Wednesday at the Judge Black Annex, 315 Market St. Early voting ends May 5 and election day is May 8.

This is the first election that will require people to have an ID.

“Everyone needs to remember to have some form of ID with them,” Rhodes said.

Beginning Jan. 1, state law required voters show a form of identification to vote in person during the early voting period or on election day in any election, according to the West Virginia Secretary of State’s Office.

If the voter has never before voted, a photo ID issued by the government will be required, Rhodes said.

If someone is an established voter, and in the system having voted in the previous election, a number of non-photo identifications can be used.

“We need something that says you are you,” Rhodes said. “A valid driver’s license (with a photo) is the best ID to have.”

There is a new law that says a pollworker can now vouch for a voter.

“Now they can sign off on that,” Rhodes said.

The law has also changed where campaign signs can now be 100 feet away from a polling place, a change from the 300-foot limitation.

Rhodes said the county has enough pollworkers, more than 400 in place, for the election.

Pollworking training will be held Wednesday through Saturday. Training for pollworkers manning the early voting site is Tuesday.

Around 56,100 people are registered voters in Wood County.

“During the last election around 26 percent of the turnout was during early voting,” Rhodes said.

The last couple of mid-term elections have had 19-20 percent voter turnout overall.

The number of absentee ballots that were distributed has been down, Rhodes said.

“Our absentees have been pretty light,” Rhodes said. “In 2014, we had 72 absentee ballots.

“So far this year, we had 64 sent out with 24 sent back so far. Sometimes the absentees are an indicator to turnout.”

“It depends on the races,” Rhodes said. “Williamstown is one of our smaller municipalities with the mayor and the council positions up for election.

“We will probably have a good turnout in Williamstown.”