Photo by Evan Bevins The Citizens National Bank building at Fourth and Market streets has stood for 120 years, but owner Robb Shaffer plans to have it demolished because of its deteriorating condition and the cost to rehabilitate it.

Photo by Evan Bevins The Parkersburg Board of Zoning Appeals on Wednesday will consider appeals of the approvals of the demolitions of the Citizens National Bank building, left, and the neighboring Mather building. Both structures are under contract to be purchased by WesBanco, contingent on the ability to tear them down. 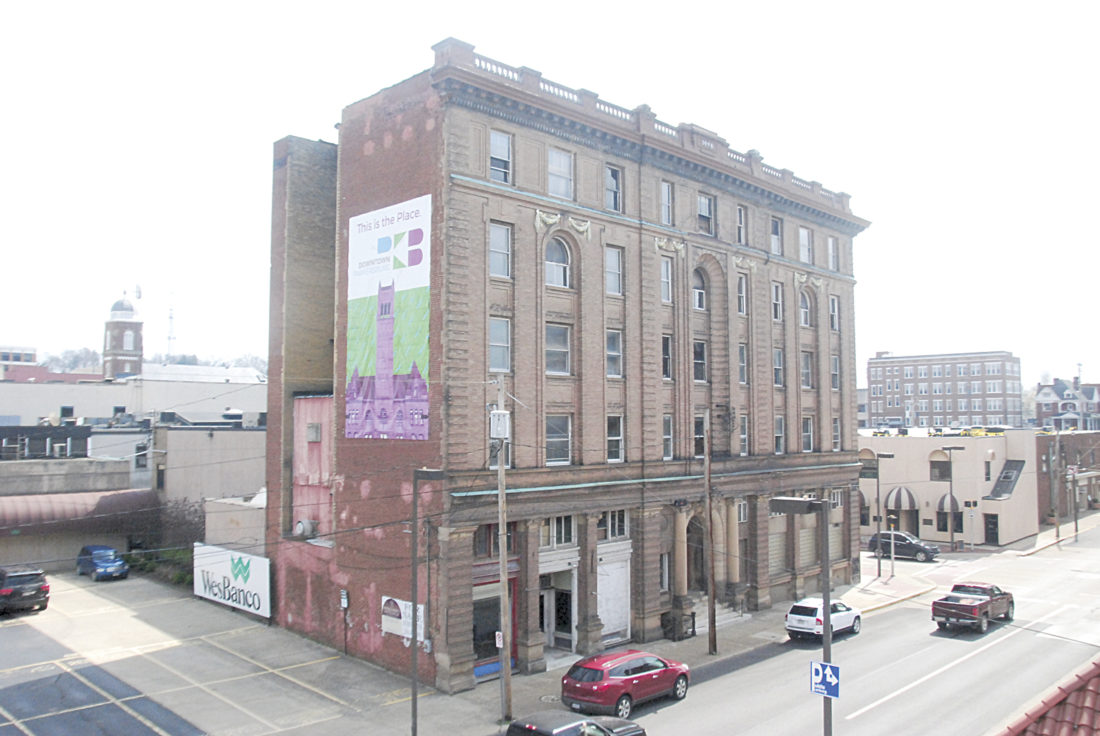 Photo by Evan Bevins The Citizens National Bank building at Fourth and Market streets has stood for 120 years, but owner Robb Shaffer plans to have it demolished because of its deteriorating condition and the cost to rehabilitate it.

PARKERSBURG –There’s no argument that the former Citizens National Bank building at Fourth and Market streets is a distinctive structure and part of downtown Parkersburg’s history.

The debate is over whether the building will continue to stand.

Parkersburg’s Board of Zoning Appeals will consider the question Wednesday, during a meeting scheduled for 6:30 p.m. in Parkersburg City Council chambers on the second floor of the Municipal Building.

Despite reticence expressed by at least two members, the Central Downtown Business District Design and Facade Committee gave unanimous approval to owner Robb Shaffer’s request to demolish the 120-year-old structure in February. They approved a request to tear down the neighboring Mather building, home until the end of 2017 to the Bankshot Pub, in December.

But four citizens challenged those decisions, taking the matters to Wood County Circuit Court after city officials said they did not have standing to appeal. Circuit Judge J.D. Beane ruled they did qualify to appeal and granted a stay halting the demolitions, pending a hearing before the BZA. 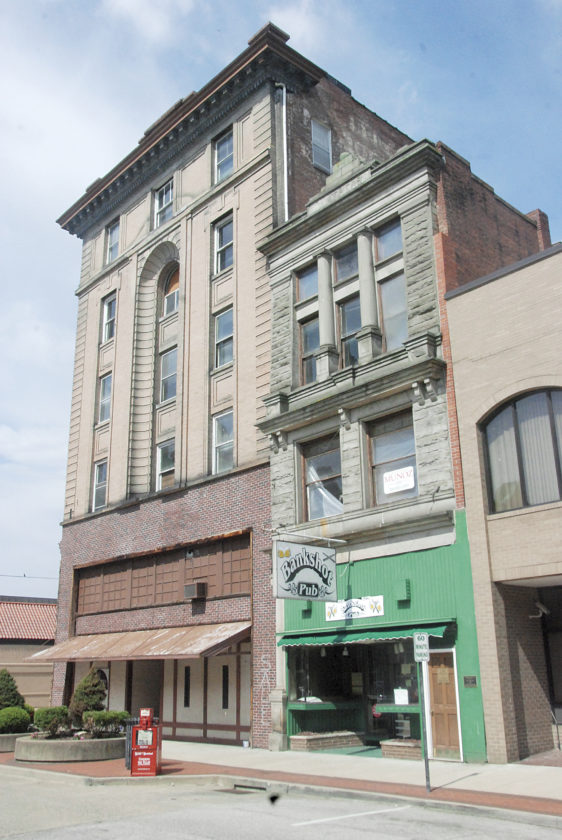 Photo by Evan Bevins The Parkersburg Board of Zoning Appeals on Wednesday will consider appeals of the approvals of the demolitions of the Citizens National Bank building, left, and the neighboring Mather building. Both structures are under contract to be purchased by WesBanco, contingent on the ability to tear them down.

“If we continue to tear down every historic building, we’re going to be left with nothing but a bunch of parking lots and stories behind them,” said Jennifer Bryant, a city resident and one of the petitioners.

Both buildings are under contract to be purchased by WesBanco, contingent on them being demolished or at least able to be demolished, said Joe Campbell, WesBanco market president. The company’s commercial loan offices are located next door to the Mather building at 409 Market St.

WesBanco aims to have both buildings demolished and do some renovation on its existing facility, perhaps consolidating its downtown branch with the loan offices and tearing down the branch at 415 Market as well. The Citizens Bank property might become an area with some benches and greenery, he said.

“The whole idea would be not to trash this block, but the idea is to make this block nicer than it is,” Campbell said.

Despite the company’s plans, Campbell said he’s glad the appeal is being considered.

“I think they need to have their voices heard,” he said.

The buildings are located in an area “specifically zoned to be preserved and protected,” said Justin Roedersheimer, another petitioner and owner of a house he is restoring in the Julia-Ann Square Historic District. “I don’t think you create jobs and attract people by making our city an uninteresting, one-dimensional place to live.”

While not every building can be saved, Roedersheimer said he thinks the city can do more than it is to save and encourage protection of historical structures, including offering incentives to preserve them and working with preservation organizations.

The city does offer tax incentives for renovating vacant buildings and funds to match up to $20,000 for improvements to downtown building facades.

Shaffer, who declined to be interviewed for this story on the advice of legal counsel, has said he bought the property in 2001 with an eye on preserving it. But now he doesn’t see an alternative to tearing it down, citing the monumental expense and uphill battle of trying to not only maintain but repair the structure.

“Everybody that’s looked at the building realized it’s not going to be habitable,” said local realtor Holmes R. “Butch” Shaver, who has had the property listed since 2006. “Financially, it just wouldn’t work.”

“It could be done incrementally,” he said. “If I could raise the funds for something like that … I think you could have an amazing space.”

Petitioner Todd Stubbe said the Citizens bank building was on his radar when he was looking for a downtown structure to rehabilitate and he understands Shaffer needs out from under it.

“I’d love to be able to take care of him” and save the building, Stubbe said. But with his work rehabilitating the Dils Center ongoing, he’s not in a position to take on the project, at least not by himself.

While the Bankshot was open in the Mather building through the end of 2017 and has an attorney’s office on the second floor, Campbell said the third floor is uninhabitable and the roof recently gave out, soaking carpet all the way down on the first floor.

The bank has no intention to rehabilitate either building, but if someone did, Campbell said WesBanco would welcome the new neighbors.

“If somebody can come in and renovate those buildings, both of them, and they’ve got the resources, that would be awesome,” he said.

Bryant and Walt Auvil, the fourth person appealing, said they were motivated by the process through which the decisions were made.

“I did not understand or agree with the position taken … to not allow public input,” Auvil said. “I hate to see another one (historic building) go, but that’s not necessarily illegal.”

Roedersheimer brought an online petition with more than 700 signatures opposing the demolition to the Feb. 14 facade committee meeting. But there was nothing on the agenda allowing for public comment. City Councilman J.R. Carpenter made a motion to allow comments but it died for lack of a second.

Both appeals make note of the lack of public comment, and the Citizens Bank appeal specifically says the committee “actively rejected public input by misleading the public to believe bylaws exist, which prevent public input. No such bylaws exist.”

City Assistant Zoning Administrator Lydia White said committee Chairman Sean Andrews spoke in error when he referenced bylaws. He was referring to ordinances related to the committee, she said.

City Attorney Joe Santer said those ordinances, and state code, are “silent on whether there’s any necessity for it (public comment) so it’s up to that entity.”

Parkersburg’s Board of Zoning Appeals will meet at 6:30 p.m. Wednesday in City Council chambers on the second floor of the Municipal Building. The agenda includes appeals of the approval to demolish the following structures:

* Citizens National Bank Building: Located at 219 Fourth St., the five-story, classic revival structure was built in 1898 and added to the National Register of Historic Places in 1982. Documents on the West Virginia Division of Culture and History website, www.wvculture.org, describe it as “a crucial cornerstone for the eroding downtown streetscape” and “a handsome statement of sensitive detail and proportion.”

* Mather Building: Located at 405 Market St., next door to the Citizens Bank building, has stood nearly as long and was the home of Franklin and DeHaven Jewelers from 1964 until becoming the Bankshot Pub in the 1990s. The Bankshot closed at the end of 2017.