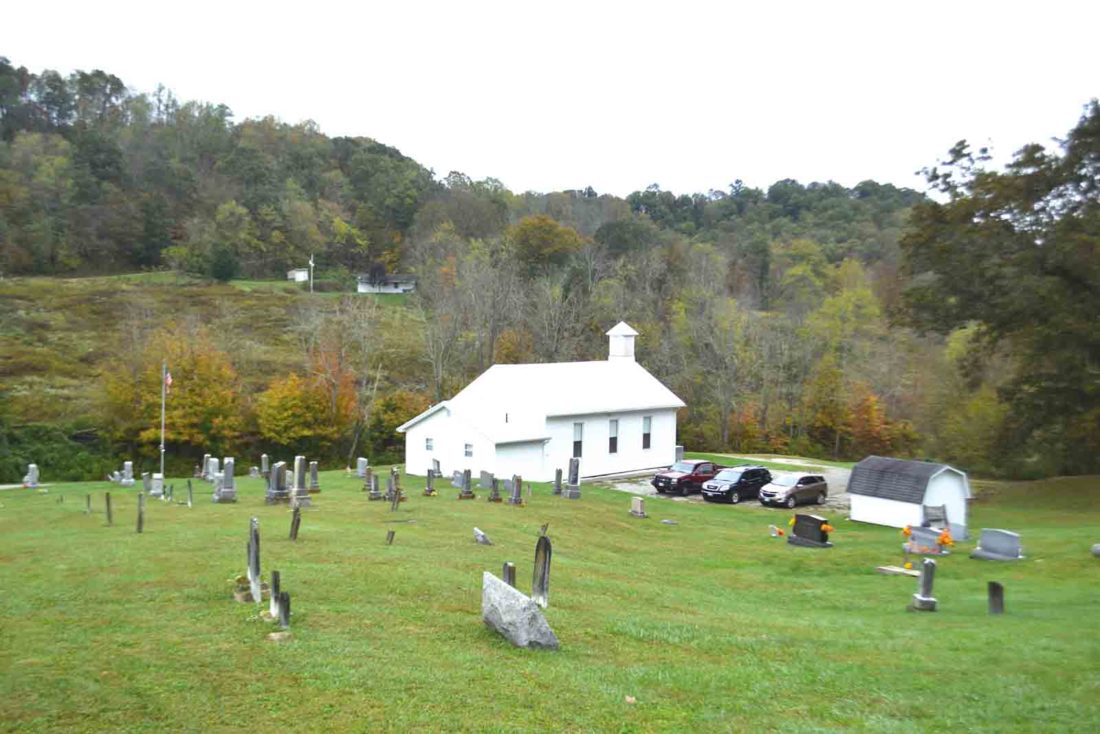 Photo by Michael Kelly The Low Gap Christian Union Church sits above Ohio 26 in Cline. The church marks its 200th anniversary this year.

MARIETTA — Anyone who wants to get to Cline in a hurry is probably going to the wrong place.

The 30-mile drive up the smooth but unforgiving Ohio 26 takes an hour from Marietta, passing Sitka, Dart, Wingett Run and finally Cline, situated across the Monroe County border. Two miles past that sign, a neatly-kept white church sits up a hill on the right.

It’s a milestone year for the Low Gap Christian Union Church, which will hold a homecoming celebration Nov. 5 to mark its 200th anniversary.

Founded as a Methodist Church in 1817 by Joseph Cline, whose family was among the first settlers in Washington Township, the church has never had a massive congregation, and now it is attended by 15 people.

Sitting in the sanctuary on padded wooden pews, Janet Graham and Linda Piatt sorted through papers detailing the church’s history and a few photographs of its past and talked about its sustained role as an anchor of the community.

“The important thing is, it’s where we’ve always gone to church and we want to keep it,” Graham said. “Our church family is our family, we have prayer chains, we call each other when we’re sick. We can lean on each other.”

Keeping the church running with a small congregation has been a challenge, Graham said, but it has always worked out.

“We’ve been blessed with donations,” she said, but there’s also work involved. Months of bake sales years back raised enough money to attach a new addition to the back of the sanctuary, housing a kitchen and bathroom.

“The challenge is, we can’t get enough people interested in coming to church,” Graham said. Most of the congregation is in their 60s, and young people often don’t stay in the community.

“I’ve got four girls, and three of them moved away,” Graham said.

Even so, they often get more than 20 children signed up for vacation bible school in the summer, she said. Christmas Eve services are attended by up to 100 people.

“People just like to get together on Christmas Eve,” Piatt said.

The building is in good condition, although that hasn’t always been the case. When Dorothy Cline, a member of the community’s founding family, and her baby died in childbirth in 1941, so many attended the funeral that during the memorial service the floor around the pulpit began to give out, and the men at the front barely prevented the casket from falling through.

A rededication — attended by 500 people, with basket dinners and lemonade by the barrel — was held later that year, raising $320, enough money to do necessary reconstruction, with the help of volunteer labor and donated materials, and pay off the church debt.

Another challenge is recruiting pastors, but the church has met it successfully.

Low Gap shares its pastor, James Scott, with two other churches, holding Sunday morning services on alternate weeks but still offering evening services every Sunday. Scott, Graham said, was brought into the ministry with the mentorship of former pastor George Hoskins, who from 1996 through 2010 came to Cline from his home in Lima every weekend, arriving on Friday and leaving on Sunday.

Scott, she said, attended the church when he was a boy.

“We never went more than a couple of months without a pastor,” she said. “We’ve been blessed.”

Behind the church, a cemetery spreads up a green, well-tended slope, the final resting place of generations of village families –Clines, Piatts, Knowltons and others, some of whom Graham and Piatt claim as ancestors.

A decade ago Graham got a surprise when she received a call from England. The woman on the other end of the line told Graham her husband had died and wanted his ashes interred at the Low Gap cemetery. He was a Cline and his grandfather was buried there. She ordered a tombstone, which was placed before she came from England to put his ashes in the old family ground.

“She was a very nice lady, very appreciative of everything we did,” Graham recalled. “We made a lunch for her after the service.”

Near the center of the cemetery stands a weathered stone marking the grave of Joseph Cline, who died in 1842 at the age of 76, 25 years after founding the church.

In 1817, to the north, construction began on the Erie Canal. To the south, Mississippi and Alabama were still a single territory. Ohio had achieved statehood 14 years before, James Madison had just been elected the nation’s fifth president, and overseas, Franz Liszt, the eldest of the Romantic composers, was a teenager and Beethoven had just begun work on his world-shaking Ninth Symphony.

In the modest Low Gap church, a Haddorff upright piano sits against the wall, waiting for the hands of another congregation member, Lorraine Howell, to bring it to life on Sunday.

“It’s older than I am,” Graham says with a laugh. “We have a guy that comes around and tunes it.”

With its long, crowded and treasured past, the church still looks to the future with hope. At one time not long ago, Graham said, you could see four generations of worshippers at once sitting in the pews.

“We only have two from the next generation, but God works in mysterious ways,” she said. “And if it’s his will, it will continue.”