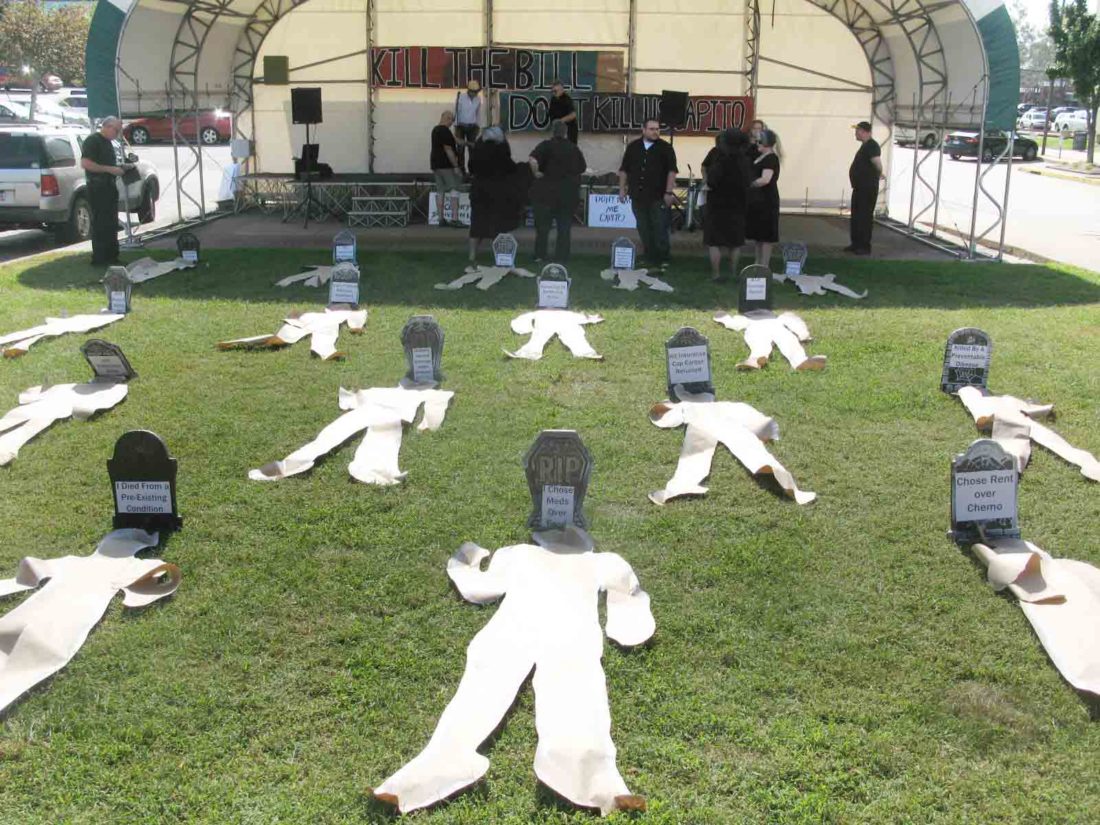 Tombstones and paper cut-outs of people depict what would happen if the Affordable Care Act is repealed at a rally of Wood County Indivisible on Monday at Bicentennial Park. (Photo by Jess Mancini)

PARKERSBURG — It’s not over until it’s over.

The Rev. Janice Hill thought when the last attempt to repeal – the skinny repeal – died in July, it would be the last time.

“Yet here we are again,” she said from the stage at Bicentennial Park.

The Graham-Cassidy bill, named after the chief sponsors Lindsey Graham of South Carolina and Bill Cassidy of Louisiana, is on the fast track so a vote can be taken by Saturday when a simple majority of 51 is needed for passage. 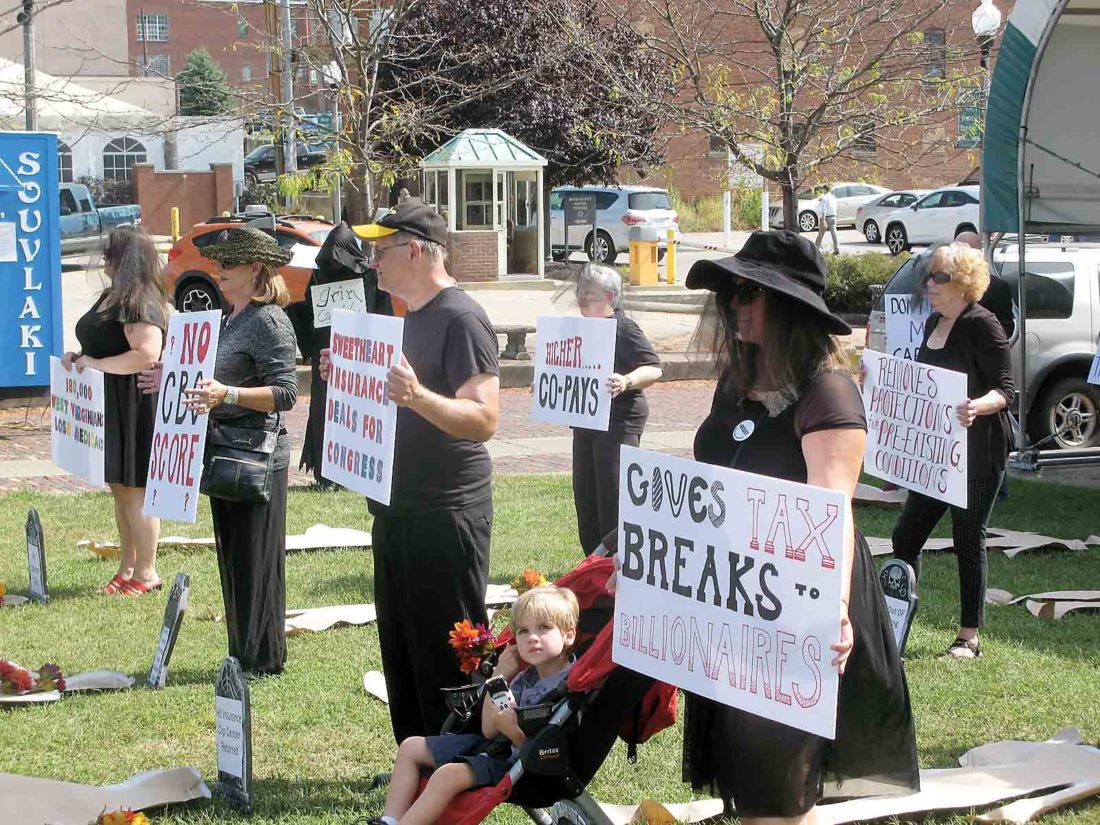 Participants stand during a rally by Wood County Indivisible Monday at Bicentennial Park to protest the latest Republican attempt to repeal the Affordable Care Act. (Photo by Jess Mancini)

After Saturday, 60 votes will be required for passage, which means Republicans – minus several including John McCain – will have to find Democrats for their side.

About three dozen members of Wood County Indivisible, dressed in black and carying signs, stood in the hot sun over grave stones and cut outs of bodies to depict those who would die if the Affordable Care Act was repealed.

Temperatures were near 90 during the rally. An ambulance was dispatched to the park upon the report of a woman succumbing to heat exhaustion.

On the stage was a banner asking Sen. Shelley Moore Capito, R-W.Va., to vote against Graham-Cassidy. 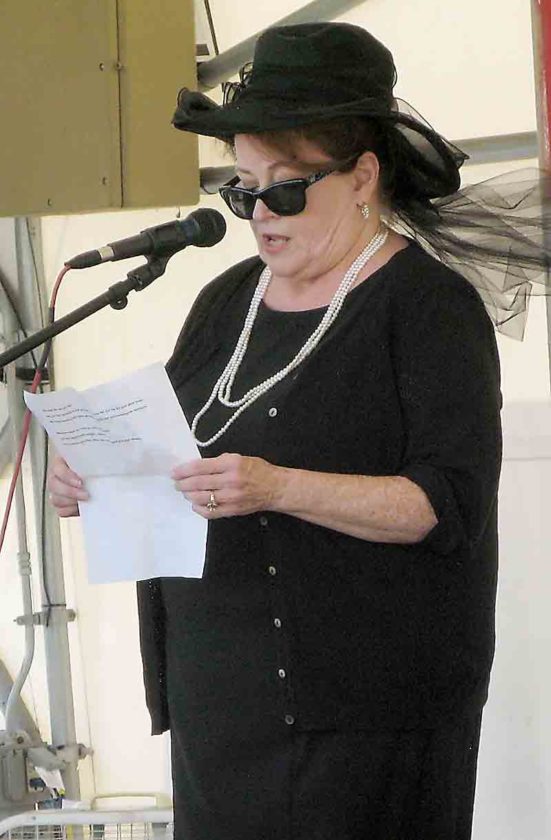 Sarah Townsend speaks Monday at a rally, which was organized by Wood County Indivisible, against the latest attempt to repeal the Affordable Care Act. (Photo by Jess Mancini)

With the song “Sing On” by the Eureka Brass Band playing, a funeral procession was led by the Grim Reaper at the beginning of the rally.

Rallies such as these and across America have informed people about what the end result would be if the Affordable Care Act is repealed, Sarah Townsend, a speaker, said. It impacts life and the quality of life, she said.

The Graham-Cassidy bill “is the most disgusting, distasteful piece of legislation that has ever been introduced in the 32 years I have been involved in this business,” Rapp said.

Repeal of the Affordable Care Act, dubbed ObamaCare by opponents, will return things to like it was before when people couldn’t find coverage, couldn’t afford coverage and couldn’t afford health care, Rapp said.

Estimates are 32 million people nationwide will be affected. States which expanded Medicaid coverage with the Medicaid expansion in the Affordable Care Act, including Wesr Virginia, will lose those funds, he said.

Rapp called himself a health care advocate and became involved more than 30 years ago when he advocated for health care benefits for HIV and AIDS patients.

“You don’t want to go back to that time,” he said.

In the meantime, the Save My Care Coalition and the West Virginia Alliance for Health Care Security have organized a bus for local residents to go to Washington, D.C., today to ask Capito to vote against the Graham-Cassidy bill.