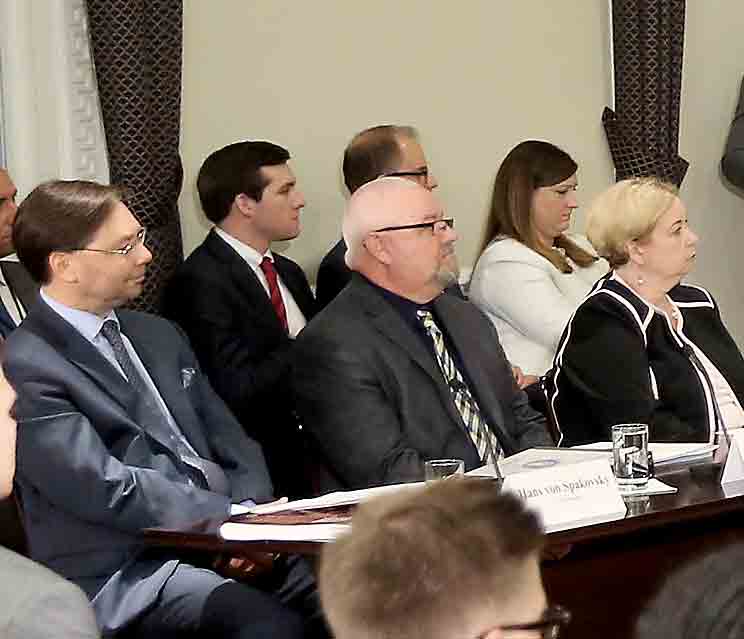 PARKERSBURG — The Wood County clerk Wednesday was on the national stage at the inaugural meeting of the Presidential Advisory Commission on Election Integrity in Washington, D.C.

County Clerk Mark Rhodes spoke about his experience with an incorrect registration and how he was elected by only five votes.

”Many of the things mentioned here, I can say have happened to me,” he said.

The 15-member commission was created in May by an executive order by President Donald Trump after he made unsubstantiated claims of widespread voter fraud.

Rhodes, a Democrat, one of two county clerks, was appointed in June by the president upon the recommendation of West Virginia Secretary of State Mac Warner.

The commission has requested voters registration data that is publicly available from all states. Its charge is to make sure the sanctity and confidence in federal elections are preserved and to identify vulnerabilities.

Rhodes, who worked in the county IT department since 1997, had to vote a provisional ballot in 2000 because of an error in the rolls.

”The reason was I was deceased,” he said.

Before West Virginia had a statewide voter system, counties had to do a data upload with the Secretary of State’s Office, Rhodes said.

”It wasn’t working properly,” Rhodes said. ”I ran a test and marked myself ‘deceased’ and never revived myself.”

Rhodes said he went to vote in the precinct and was told he was not in the registration books. Because of this, he ended up voting a provisional ballot.

He went to the Wood County Commission, which was canvassing ballots, and it verified he was alive and his vote was counted.

”There are things that do happen,” Rhodes said. ”We try to make sure that every legally cast ballot does count.”

Rhodes won his first election for county clerk by five votes out of over 24,000 cast.

He does not want doubt or speculation in any races as close as his was and that all the votes are counted properly.

”I just want to make sure we have good, fair and honest elections,” Rhodes said.

Vice President Mike Pence, who chairs the commission, thanked Rhodes for being part of the commission and the experience he will bring. The vice president also commended Rhodes on his apparently improved health after being listed as dead.

”Glad you are doing well,” he said which got a few laughs from those in attendance.

The panel begins its work without preconceived notions or pre-ordained outcomes, Pence told the group assembled in Washington.

Trump also spoke to the commission, emerging from behind a partition upon introduction by the vice president.

“I look forward to the findings,” Trump said.

Thirty states have agreed to send data and information will be forthcoming from others; however, the reluctance to share information could be suspect, according to Trump.

“If any state does not want to share this information, one has to wonder what they’re worried about,” Trump said. “And I asked the vice president, I asked the commission: What are they worried about? There’s something. There always is.”