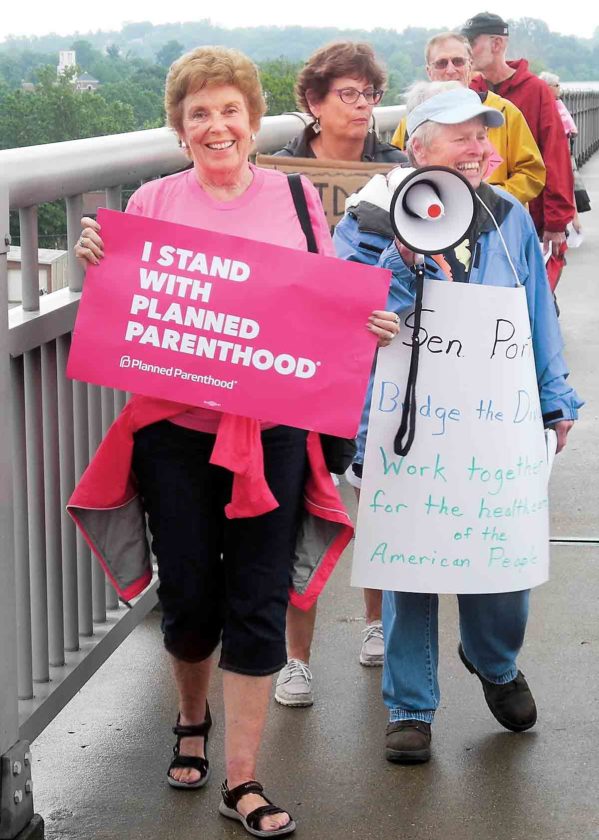 Asking U.S. Sens. Rob Portman, R-Ohio, and Shelley Moore Capito, R-W.Va., to vote against any bill repealing the Affordable Care Act and marching in support of Planned Parenthood are, from left, Jacky Miner and Kristen Stone, both of Marietta, and Betsy Cook of Lowell. (Photo by Jeffrey Saulton)

WILLIAMSTOWN — Carrying signs in support of “Obamacare” and chanting “Health Care is a Right” and “Trump Care is a lie, they don’t care if people die,” about 100 people from various groups braved the rain and marched on the Williamstown Bridge Thursday to ask U.S. Sens. Shelley Moore Capito, R-W.Va., and Rob Portman, R-Ohio, to stay with their stated opposition to what is now called the Better Care Reconciliation Act.

Organizers of the march said it was done at the bridge between West Virginia and Ohio to symbolically ask Capito and Portman to bridge the divide in Washington and reject the health care plan before the U.S. Senate.

Jeanne Peters, of Wood County Indivisible, said others represented in the protest were Next Wave Democrats, WBV Citizens Action Group and individuals.

“This is a great turnout in the rain,” Peters said. “We wanted to span the bridge; we weren’t able to but it was a great turnout. By our calculation it would take 250 people to do that.”

Peters said there will be an interfaith service about the health care bill at 10 a.m. today at the First Christian Church in Parkersburg. For now, she said, she and others are waiting to see what will happen over the next few days after the Senate returns from its July 4th holiday. 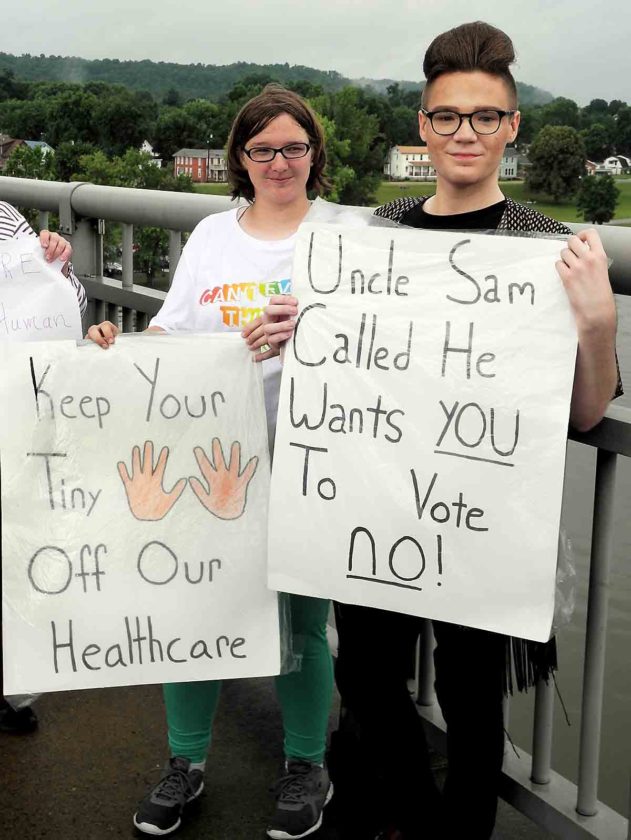 Danielle Hall, left, of Marietta, and Skylar Moore, right, of Parkersburg, take part in the protest staged Thursday on the Williamstown Bridge. (Photo by Jeff Saulton)

While Capito and Portman have said they will not vote for the act in its current draft form, it does not mean they won’t vote for it if certain adjustments are made, Peters said.

“We need to keep a strong message going to Portman and Capito there is no way to amend this bill to make it palatable for West Virginians and Ohioans,” she said. “They say they won’t vote for it in its current form but they can make some amendments and make some sweetener for them and put more money in opioid treatment among others.”

Peters said in the view of the groups gathered Thursday the best-case scenario is to fix some of the problems in the ACA. “There are problems with it; it was never intended to be a finished product and it would have worked better if the Republicans had not been refusing to fund it properly all these years and refusing to make changes that would have improved it,” she said.

“Our ultimate goal is to see all West Virginians, Ohioans and Americans have access to affordable health care.”

Justin Glick, of Morgantown, vice president of programming for West Virginia Young Democrats, said the group is hoping to put pressure on senators to oppose the Better Care Reconciliation Act. 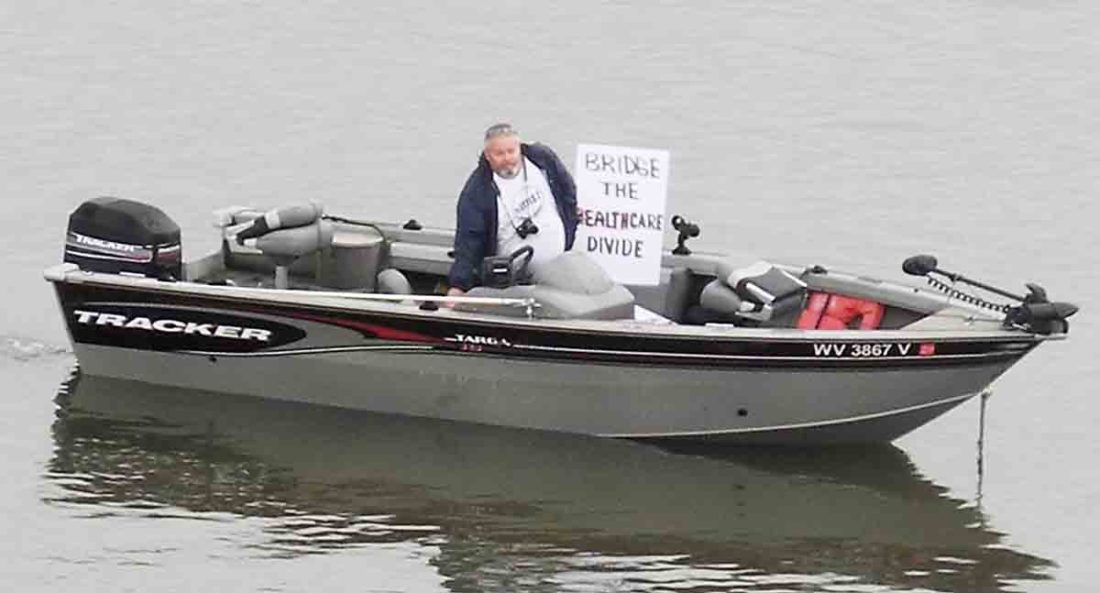 One protester promoted the theme of the march from the river. (Photo by Jeffrey Saulton)

“We are hoping to put pressure on Senator Capito and maybe hopefully sway U.S. Reps. David McKinley, Alex Mooney and Evan Jenkins, all R-W.Va., to defend Medicaid and Planned Parenthood,” he said. “We are here to put a young face on the protest.”

Jennie Lee, of Parkersburg, said she wants to see Obamacare as it is or fixing it would satisfy her.

“We want everyone to be aware of the terrible health care plan they are trying to foist on the American people, that just 19 percent of the people support but they are determined to pass it anyway,” she said. “Senator Capito is a very important weak link where we hope we can get enough GOP senators to vote against the bill.”

Lee said she was able to buy health insurance for the first time in her adult life.

“I got insurance for the first time in my adult life three years ago thanks to Obamacare,” she said. “I never made enough money to afford it and even my employer offered insurance, but I couldn’t afford $80 a month on the pay I was getting.”