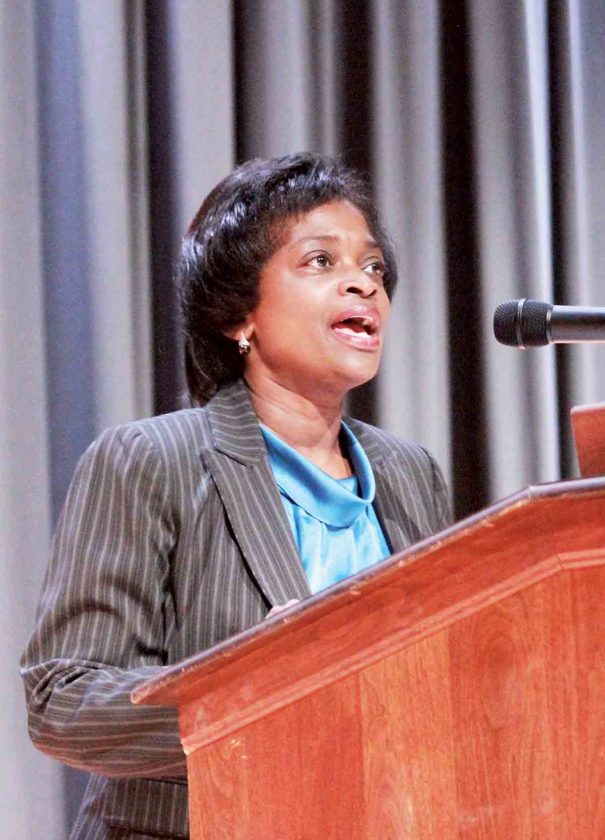 MARIETTA — Hills and hollows are a defining aesthetic to Appalachia but have been long used as the excuse for why rural Internet access cannot be achieved — alongside the lack of numbers in customer demand.

“I’m frankly tired of that myth so we’re here to myth-bust today,” said Liz Shaw, organizer of the Appalachian Ohio-West Virginia Connectivity Summit and Town Hall held at Washington State Community College and Marietta High School Tuesday. “There is hope and there are community organizing molds and policy is budging in the right direction. I hope people leave here empowered to go take action in their own communities to bring connectivity to our rural areas and make it reliable because broadband access can be life or death.”

Delegations from 16 Ohio and West Virginia counties met with Federal Communications Commissioner Mignon Clyburn Tuesday to discuss the life or death situations that plague their rural constituents and to make the case for the main message of the day: broadband Internet access is a basic infrastructure needed across the whole country, not just in urban areas.

Betsy Silk, 43, of Marietta, explained how three generations of her family have no way to reliably connect to work, school or basic emergency services in areas of both Washington and Morgan County.

“My husband is a radiologist for Riverside and often has to reboot the computer 10 to 12 times in a night to get CAT scan or MRI images to load so he can do his job,” said Silk. “My daughter who lives 8 miles out of McConnelsville had to take an extra semester to finish her classes because the Internet was so bad she couldn’t load the videos she needed to complete her credits. And I’m worried for my mother and father who live in a hollow a few miles from Malta because when it rains their landline sits in the ditch next to the roadway, out of service with no way for them to call emergency services if needed.”

Silk’s father said without reliable landlines, no cell service and no access to satellite due to the hills blocking the southern horizon, he has to travel at least four miles to make any reliable call.

“We need universal service, the way the FCC made landlines years ago,” said Mike Turner, Silk’s father. “It shouldn’t be an option for the cellular or internet companies to pick and choose where they might provide service, it should be required to reliably cover everywhere for one or the other.”

Stories like Silk and Turner’s were heard by the commissioner throughout the afternoon summit and the evening town hall and Clyburn said she hoped to take those stories back to the nation’s capital to help broaden the minds of her colleagues as they make policy moving forward.

“If I had to rank how we are prioritizing fast, affordable broadband, and robust consumer protections, I would have to give the FCC a ‘B+’ on getting broadband into communities most in need, a ‘C’ on broadband affordability, and an ‘F’ on broadband consumer protections,” said Clyburn. “Connectivity to me is infrastructure, it is the baseline of 2017. In 2017 you should not be going down any main highway in this country and not have service for more than a moment, like I did getting out here.”

Issues outlined in the summit also included geographic, economic and political barriers standing in the way of rural broadband access and the town hall touched additionally on the disparity in education and healthcare access caused by the lack of connectivity and the lack of incentive for new business investments in rural areas without reliable internet and cell service.

“But the cop-out that technology changes too quickly has no grounds,” said Bill Callahan, director of Connect Your Community, a Cleveland-based nonprofit working to bridge the digital divide in low-income households. “The technology of fiber-optics is sound, we just need the incentive to have these companies close the loops and bring in the small farms dotting rural areas and paying attention to the community anchor points.”

Julie Pepper, postmaster from Morgan County, said she sees Internet service as equivalent to the need for a reliable postal service.

“Post offices were not established to be profitable,” she said. “I look for that type of model for broadband access… This area has challenges with how broadband is run through rural hills but I don’t believe that broadband is something that should only be available to urban areas and it’s a vital problem worth tackling.”

Commissioner Clyburn said she learned much from the delegations she spoke with and came away from those discussions with an “ominous but harmonious update.”

“These stories are the ones that shouldn’t be heard in developing nations, let alone in this forefront of global change,” said Clyburn. “One woman told me of how she had to watch her father pass away at a community ball game because no one could get service to call 911, another told of how they can’t make calls if it’s raining. All of this is very frightening to me.”

She said those in the nation’s capital need reminders like the stories she heard Tuesday before creating frameworks for communications regulation rather than afterwards.

“Inside the beltway there’s a disconnect with what’s going on across the country,” she said. “What happens if you need to call 911 or your lack of service impedes on your ability to secure or maintain a job? These communities facing these issues need to be a part of the discussion creating our policy, not just handed down our frameworks and told to figure it out on their own.”

Clyburn and several of the speakers and panelists Tuesday challenged those present throughout the connectivity summit to not only reach out to their representatives at the local, state and federal levels with questions and proposals to increase connectivity in the region, but to also hold their broadband providers accountable for regulations outlined by the FCC and question what is done with personal information and browsing history.

“Building these connections in a siloed lens is inefficient, we need more communication between public partnerships, we need more private-private partnerships and we need to plan more efficiently how we can leverage these projects, roads and broadband, together,” said Clyburn.

“Do not get comfortable with the dysfunction, do not accept that this is OK, then help us as a collective American family do something about it.”

For more information about the FCC or to keep abreast of current issues like net neutrality and equal access to broadband visit FCC.gov.