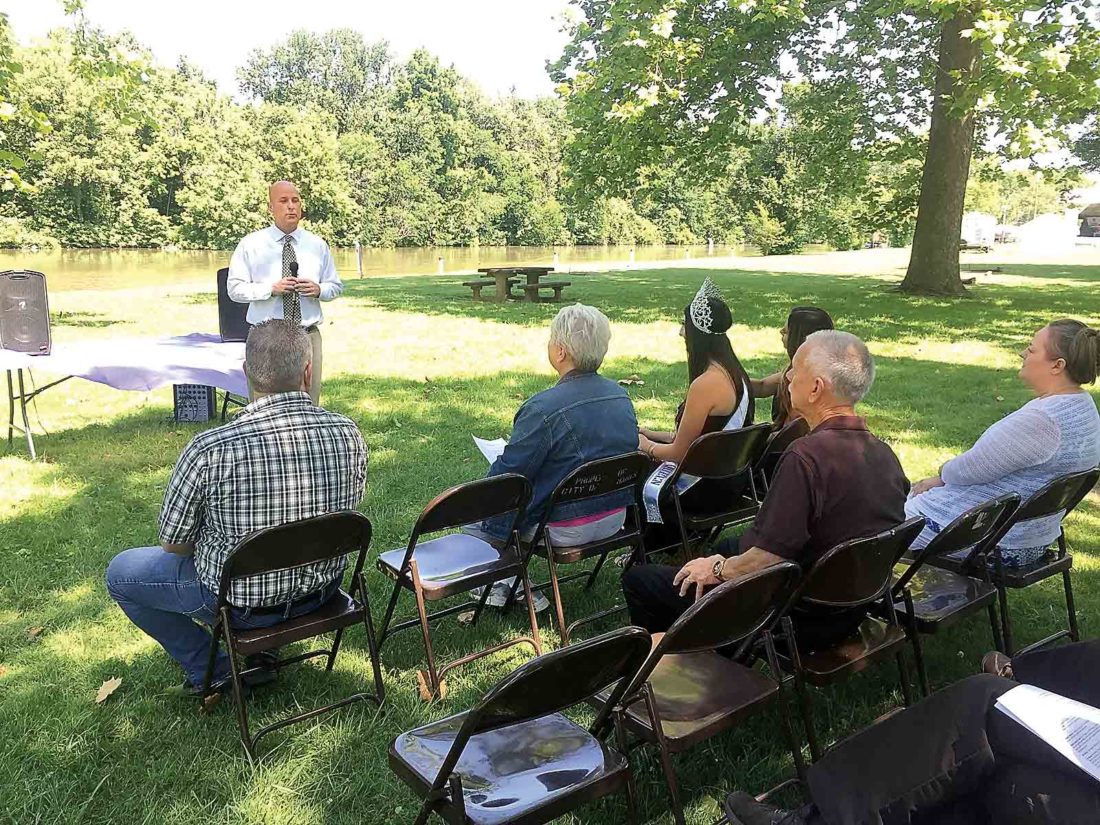 A two-mile stretch of French Creek flowing into the Ohio River, a seven-mile segment from the St. Marys Marina to the mouth of Middle Island Creek and on to McKim Creek and a six-mile loop around the Ohio River Wildlife Refuge now bring to more than a dozen the number of water trails in the state, which are designated by the West Virginia Recreational Trail Advisory Board. They were unveiled Friday during a press conference at the marina.

“That’s not something you’re going to do in a day,” Pleasants County Convention and Visitors Bureau Director Jody Murphy said of the approximately 15 miles of water trails. “So I’m hoping it’ll be a weekend.”

According to a release from the CVB, the trails are routes for small, non-motorized boat traffic that allow boaters to stop off on banks along the way to take in shops, restaurants and other attractions. Two of the trails start at the marina, which is within walking distance of downtown St. Marys, while there is access for fishing, camping and wildlife observation at other points.

“The trails are not adrenaline-laden, whitewater runs,” the release says. “It’s slow-paced leisure activity, along easy flat water, with plenty of scenery, solitude and natural beauty all around.”

Speaking at the press conference, Pleasants County Commissioner Jay Powell said the trail system is another means through which the county’s tourism footprint can be built and expanded.

“We are blessed to have this,” he said. “It’s another attraction for our county.”

And the boating opportunities aren’t limited to Pleasants County.

Middle Island Creek is the longest creek in the state, and Murphy said he would like to work with Tyler County officials to include their portion on the water trail as well. In addition, a combined 57 miles of the Ohio and Little Kanawha rivers were designated as the Ohio River Water Trail in Wood County last year.

“These trails mark the start of an improved tourism influx for Pleasants County and assist the Mid-Ohio Valley in terms of attracting more tourists,” Murphy said. “This can be a water tourism destination.”

There are outfitter companies in Marietta and the North Bend areas that provide tours of rivers, streams and lakes in the region, he said.

“We’d like them to know that Pleasants County is open to that as well,” Murphy said.

Multiple entities worked together over an 18-month period to achieve the water trail designations, which put the trails on the map with the rest of the state’s system, Murphy said. Project approval and letters of support came from the Pleasants County Commission, the cities of St. Marys and Belmont and the Pleasants County Development Authority. Letters also came from the Ohio River National Wildlife Refuge and the Friends of the Ohio River National Wildlife Refuge.

“This was a group effort,” Murphy said.

After achieving water trail status, the next steps include signage and marketing and improving the trails, particularly ingress and egress stops on the Middle Island Creek Trail, the release says.

* French Creek Trail — A two-mile stretch of water that flows into the Ohio River.