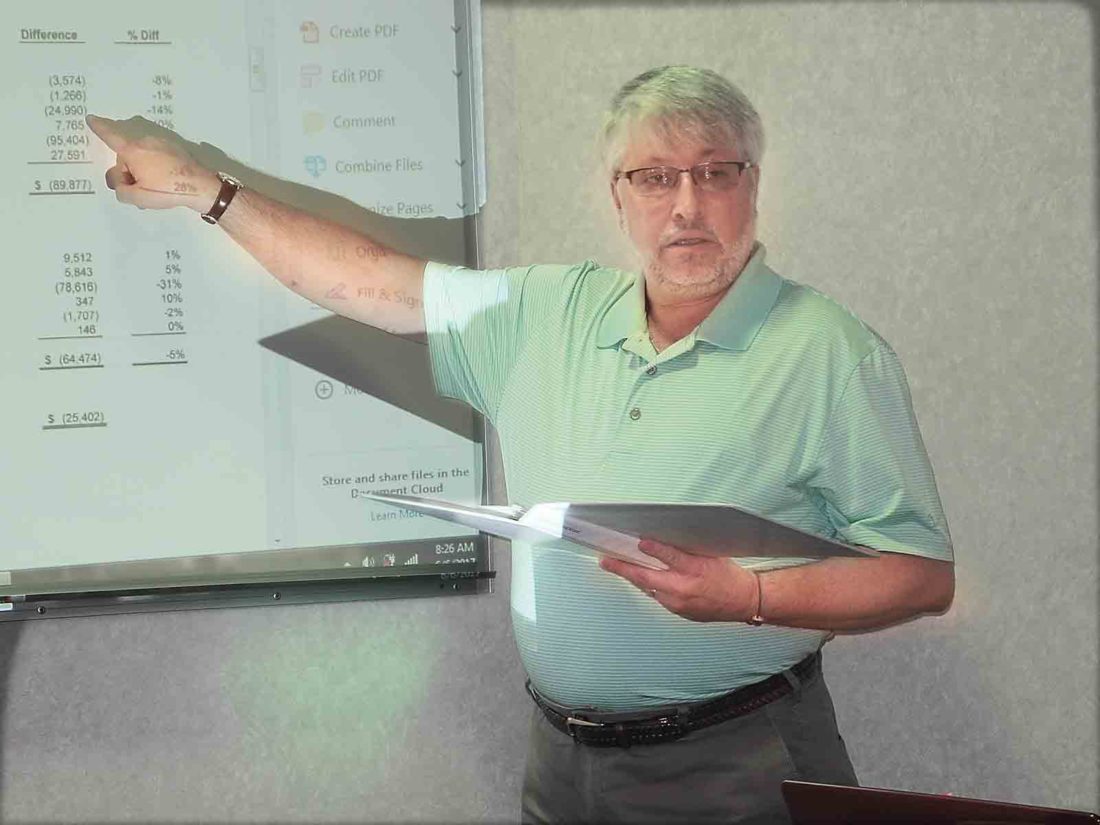 Mid-Ohio Valley Regional Airport Manager Jeff McDougle presents the 2017-18 fiscal year budget to the Wood County Airport Authority during its meeting Tuesday. The budget was approved as presented. Earlier in the meeting, McDougle announced his plans to retire this fall. (Photo by Evan Bevins)

The budget includes $5,000 to pay the incoming manager during September to shadow McDougle and learn the ropes before McDougle steps down in October after four years on the job.

Authority President Bill Richardson, reappointed to the group by the county commission Monday, thanked McDougle for his service.

McDougle was retired when he and his wife returned to the area 10 years ago. With his experience in aviation, he wound up serving on both the Mid-Ohio Valley Regional Airport Authority, the airport’s marketing arm, and the Wood County authority, which oversees day-to-day operations.

In the fall of 2013, he was hired as manager, succeeding Terry Moore, who now serves on the Wood County Airport Authority.

Moore said perhaps McDougle’s most notable accomplishment was paying off the $283,000 debt the airport had when he took over.

“That was such an albatross, and it no longer exists,” Moore said.

McDougle said he feels good knowing his successor won’t be dealing with the same issue.

Moore said the authority should begin accepting resumes immediately, as well as formally advertise the position by next week. Richardson suggested a deadline to receive resumes of 45 days after the job is advertised.

“That gives you to the end of July,” Moore said. “Then you go through your process in August and hopefully have someone in place” by September.

The lack of debt gives the airport the ability to replace its annual contribution from the county, which was eliminated this year as the commission struggled to balance its budget in the face of rising regional jail bills. The current year’s contribution was $50,000 and before that it was $100,000, so McDougle suggested using $100,000 in airport funds to help offset an estimated $177,000 in one-time projects this year, more than half of which is expected to go toward repairs to the roof of Hangar 5.

Multiple private aircraft are stored in that hangar. The repairs could allow the authority to consider raising the rates on the space, McDougle said.

Some authority members were initially hesitant to approve using so much money from what McDougle described as the airport’s rainy day fund, which has about $585,000 in it.

“So what do we do next year with that?” Moore said.

Payroll and benefits are projected to rise by a little over $75,000, due in large part to the airport taking over operations at its restaurant, which employs a manager and multiple part-time workers, for total personnel expenses of $50,888.

McDougle included in the budget a 50-cents-an-hour wage for hourly, full-time employees, bringing their average rate of pay to $13.54 an hour. With benefits, that represents an increase of $15,182 per year.

Members also discussed whether a new car for the manager was needed. McDougle has been using his own vehicle and recommended the authority advise his replacement to expect the same. However, he noted that’s something they will have to consider as they try to attract a new manager.

“You’re also going to have to consider the salary,” he said.

McDougle’s annual salary is $55,000. He did not change that in the budget, leaving any adjustment up to the authority in the future.

The budget projects income of $1,219,291 and expenses of $1,211,621, both up about 7 percent from the current year. Some of that is due to money carried over for items, like the Hangar 5 roof, that were not addressed this year.

The budget does not include any revenue from a proposed leasing of the former National Guard facility, an updated proposal for which could be considered at its July 11 meeting.

“So if that comes through, that’s a little icing,” Richardson said.

The authority approved the budget 4-0, with member John Pfalzgraf absent.