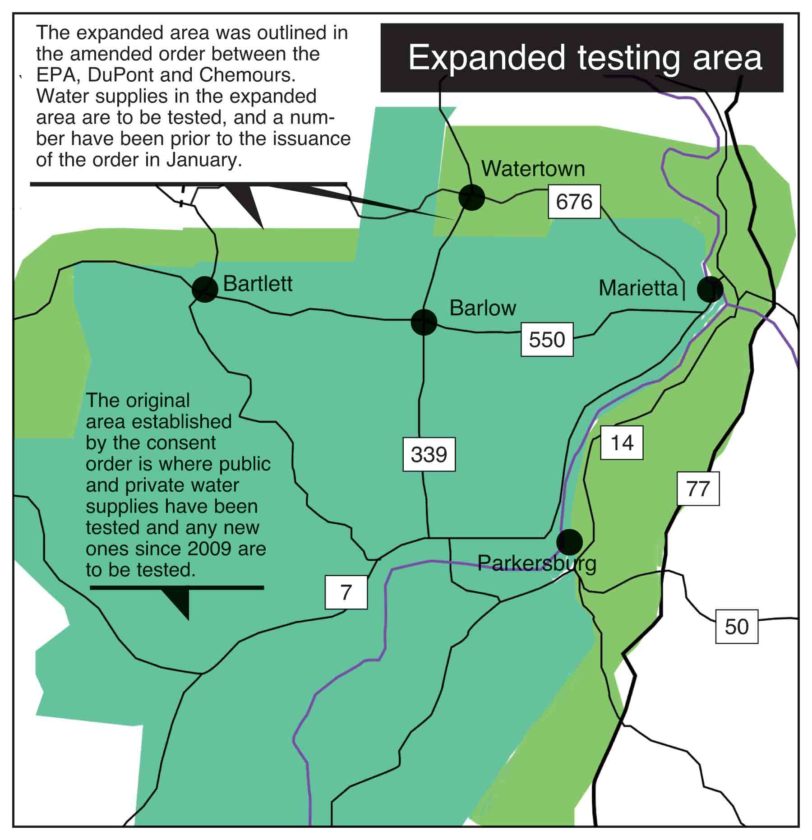 PARKERSBURG — Testing of public and private water wells for C8 in an expanded geographic area got under way even before an amended order between the U.S. Environmental Protection Agency and DuPont and Chemours was finalized, EPA officials said.

The expanded area follows Interstate 77 from southern Wood County north into Washington County just past Devola, along with a separate portion in Athens County. Public water supplies in the new area include Parkersburg, Williamstown and Marietta, which have been tested.

Results from the Putnam Community Water Association in Devola are pending, and testing of private wells is ongoing.

C8, also known as perflurooctanoic acid or PFOA, was used for decades in the Teflon-manufacturing process at DuPont’s Washington Works in southern Wood County. A science panel created in the settlement of a class-action lawsuit over the presence of the chemical in water found a link between exposure to C8 and kidney cancer, testicular cancer, ulcerative colitis, thyroid disease, pregnancy induced hypertension including preeclampsia and hypercholesterolemia.

The original order, issued in 2009, set a geographic area in which DuPont had to test for the amount of the substance in water supplies and levels at which it had to take action to filter the water or provide an alternative source.

The amended order, released in January, adds DuPont spinoff Chemours, which now owns the Washington Works, to the order and lowers the action level from 0.4 parts per billion to 0.07 ppb. If results show concentrations above 0.05 ppb, the companies must offer additional sampling of those and nearby public and private water systems.

If a concentration of more than 0.07 ppb was detected, “they would be offered alternate water or treatment,” said Roger Reinhart, enforcement and compliance team leader for underground injection control in EPA Region 3.

The 0.07 ppb threshold is the new lifetime exposure level the EPA issued last year, based on protection for the sensitive populations of fetuses during pregnancy and breastfed infants.

That announcement resulted in a Mid-Ohio Valley Health Department advisory not to drink public water in Vienna, where levels tested above 0.1 ppb in most of the city’s wells. Chemours paid for the installation of a carbon filtration system for the city, as DuPont had for six other public water systems following the settlement of the lawsuit.

Last summer, Chemours tested the water wells for the cities of Williamstown and Marietta, as well as the Warren Community Water and Sewer Association west of Marietta. According to data provided by the EPA, all three showed finished water with concentrations below the 0.07 ppb level.

Williamstown’s treated water showed a concentration of 0.018 ppb, while Marietta’s tested at 0.012 ppb. Warren’s was recorded at less than 0.005 ppb.

Chemours did not do additional testing on the Parkersburg Public Utility Board’s water, because the utility had testing from 2015 that showed a level of 0.031 ppb. Testing in 2016 revealed a level of 0.029 ppb.

“We have not yet required Chemours to do any testing at Parkersburg, but that is not out of the question,” Reinhart said.

Ongoing testing at many private water supplies in the region has shown no trend up or down, Reinhart said. If results showed higher levels near Parkersburg, the EPA could require testing of the PUB water.

The 2015 testing was a requirement of the EPA’s unregulated contaminant rule, but that was a one-time thing, said Rick Rogers, associate director for drinking water, EPA Region 3.

PUB Manager Eric Bennett said recently that the utility will test for C8 at least once a year, regardless of whether it’s required by the EPA.

“We’ll continue to make sure that we’re within the appropriate limits,” he said.

“We have never tested for C8,” he said, noting the association wasn’t in the area identified in the original order and he was unaware of anyone bringing the matter up before.

When the lifetime health advisory was announced in May, some residences were either connected to a public water supply or provided with carbon treatment systems based on tests performed between 2006 and 2009 that showed their wells had C8 levels below the previous action level but above the new one, said David Sternberg, EPA press officer. Additional testing is being done on private water supplies in the expanded area.

Between 30 and 35 homes have been provided with either installation of carbon treatment or connection to a public water supply since the new lifetime advisory was announced, Sternberg said.

In a statement, Chemours reported the total number of public and private water wells it has addressed.