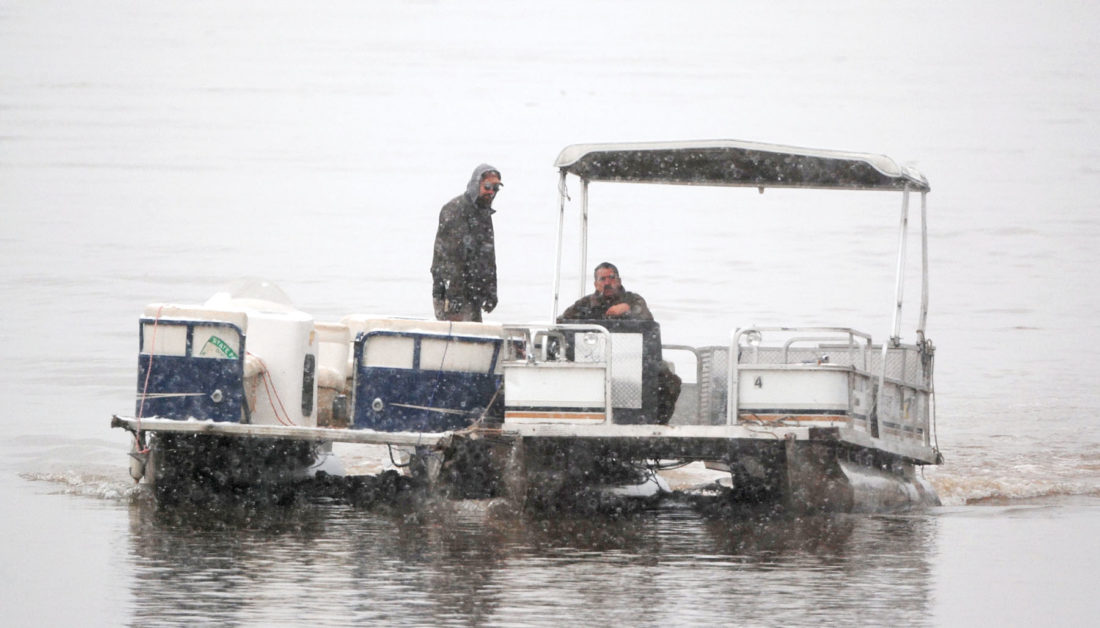 Photo by Art Smith Workers from Blennerhassett Island work on bringing a pontoon boat back to shore. The caretaker from the island leaped off the boat into the river near the shore when it began drifting toward an oncoming barge. The second boat had to be put in the water to retrieve the runaway craft.

BELPRE — The caretaker of Blennerhassett Island had to get a little wet Thursday after his boat stalled in the Ohio River.

At around noon reports transmitted over radio by emergency crews said a man fell into the Ohio River off of Blennerhassett Island.

Tom Hardman, who is serving as the island caretaker and runs the gift shop and concession stand during the regular season, was taking a launch boat from the island over to Civitan Park in Belpre.

After pulling out to the dock the engine stalled and he couldn’t move. The boat began drifting and a river barge was headed in his direction. Hardman said he had to get out of its way.

“The current took me over fairly close (to the island) and I had to jump in and get a little wet,” Hardman said. “That was the only time I got a little concerned. Luckily, I had my safety suit on or I would have been in serious trouble.”

His safety suit, also known as an immersion suit or survival suit, is a special type of waterproof dry suit that protects the wearer from hypothermia from immersion in cold water.

Hardman said he only got a little wet as a result.

“There was a barge coming and I had to jump in to get the boat to shore,” he said.

He had the suit only a couple of days.

“It worked great,” Hardman said. “It did the trick.”

Hardman said only his hands got a little roughed up as he was grabbing onto the island’s rocky riprap.

As the river level was high Thursday, the river had a lot of debris and Hardman believed the boat’s propeller had something hit it which prompted the boat to stop moving under its own power.

As the current took him back toward the island, he made the decision to jump in close to shore. He was able to tie the boat off on rocks that form the riprap along the shore.

Workers from Blennerhassett Island had to retrieve the boat and bring it back to shore.

“It must be something bad because crews couldn’t start it,” Hardman said.

That boat was scheduled to be pulled from the water at the end of this week with this being Hardman’s last day on the island until spring.

Park crews will be making regular trips to the island to check on things.

Hardman said they are used to the barge traffic along the river. Many of the local barge operators know about their boat and take precautions.

He did not recognize the barge he had to get out of the way of.

Park officials said the river level was up with estimates of about three feet above normal.

“The water is not the safest place to be this time of year,” Hardman said.

He admits things were not as hectic as the initial radio reports led some people to believe, but was thankful he was not seriously hurt.

“It could have been a lot worse,” he said.