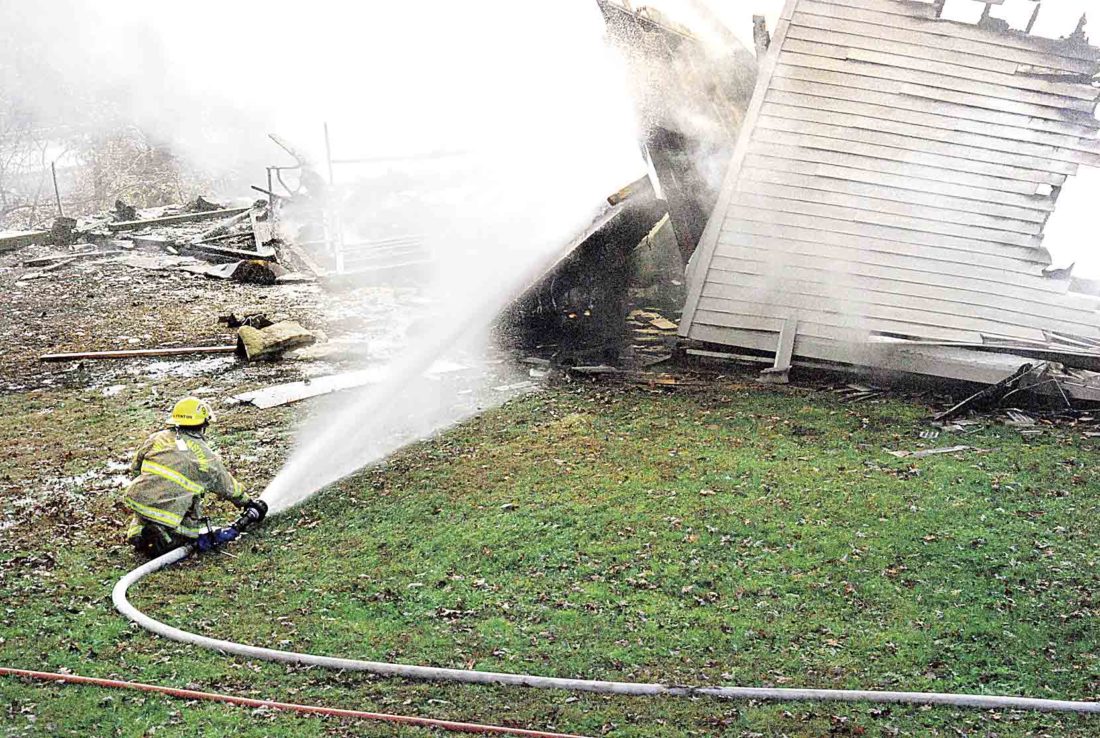 WILLIAMSTOWN — A plume of smoke was visible from Interstate 77 as a two-story house overlooking West Virginia 31 burned to the ground Wednesday.

Volunteer fire departments from Williamstown, Vienna and Waverly responded just before noon to the blaze at 2105 Williamstown Pike, also known as W.Va. 31.

Williamstown Fire Capt. Paul Jordan said the call came into 911 from a passing motorist on interstate. He said response to the scene was complicated since driveway to the hilltop property was blocked by a locked gate.

Firefighters had to come up to the scene on the winding driveway on an adjacent property.

“We had a pretty rough time gaining access to the property,” he said.

Meanwhile, the nearest fire hydrant was on Dry Run Road, an estimated 2,000 feet away, Jordan said. Traffic was blocked for a time as the Waverly firefighters laid the supply line from the hydrant.

As the fire raged, the house collapsed in sections as firefighters worked to douse the flames. Occasionally, they sprayed water over a nearby hillside in an apparent effort to prevent a brush fire from igniting.

“That fire got a head start on us,” he said. “Anytime you have fire like that with dry leaves and wind, (a brush fire)  is a concern.”

Officials said the house belonged to Mike Vaughn, whose son, Brian, lives nearby. Brian Vaughan was returning from surgery at Camden Clark Medical Center Wednesday morning on W.Va. 31. “We saw the smoke and said, ‘Holy cow, that’s close to our house,'” Brian Vaughan said. As they got closer, they “just saw the flames up through the roof and through the second-floor windows.”

Jordan said the elder Vaughn lived there, but nobody was there at the time of the fire.

Jordan said the Vienna and Waverly volunteer fire departments were there on mutual aid and the Reno VFD covered for Williamstown.

Jordan said the fire investigation team left the scene as undetermined since there was no evidence of arson.