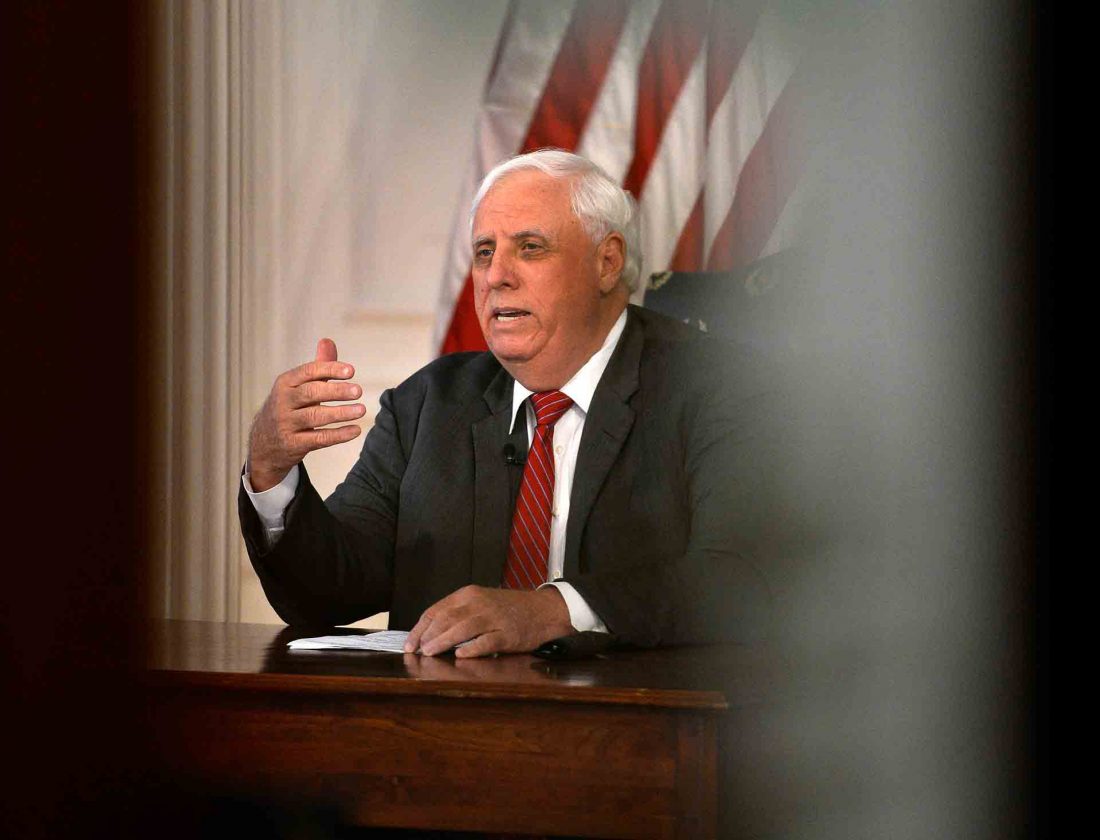 In this March 23 file photo, West Virginia Gov. Jim Justice issues a stay at home order from his office in the State Capitol in Charleston. Justice has expanded his aggressive plan to lift coronavirus restrictions after announcing new hotspots in the state’s eastern panhandle. (AP Photo)

CHARLESTON — West Virginia Gov. Jim Justice said a surge this week in COVID-19 infections in the Eastern Panhandle has led him to dispatch the National Guard to Jefferson and Berkeley counties.

In Justice’s daily briefing Thursday, the governor reported another death due to coronavirus — an 85-year-old woman in Kanawha County — bringing the total number of deaths in West Virginia to 70. Justice also said Berkeley and Jefferson on Wednesday reported 20 and 15 new positive cases of coronavirus, respectively, and those numbers were expected to rise.

State officials have been using a “positive growth rate” comparing the number of positive tests against the total number of tests administered.

“We’ve had days when we were at half a percent,” Justice said. On Wednesday “that jumped to 3.1 percent. It is driven an awful lot by the counties I’ve mentioned: Jefferson and Berkeley.

“We’ve got a problem there. Those numbers are not good, that’s all there is to it. We’re trying to get to the bottom of what the issue is,” he said.

Justice said those Panhandle counties border both Virginia and Washington D.C. and are particularly vulnerable as those areas outside of West Virginia begin to relax restrictions.

“We have a gigantic population of people (in neighboring states) that can infect the people in those counties,” he said. “I have directed our National Guard to go (to those counties) within hours and to report back all of their findings in the morning.”

Justice asked residents in those counties as well as state wide to continue taking precautions recommended by the federal Centers for Disease Control, especially wearing a mask when in public or around groups of people, a request echoed by Dr. Clay Marsh, coronavirus czar for West Virginia.

“The mask may very well be the key to everything, and the inconvenience is minuscule compared to the benefit,” Justice said. “If 80 percent of our people do it, the results are phenomenal.”

“I think the message, the lesson here, if we wear masks and get to that 80 percent we’re going to protect ourselves and each other.”

Marsh said since there is a delay between when people are infectious versus when they exhibit symptoms, it can take weeks to bring an outbreak back under control.

“Whatever we see today has likely been going on for two weeks,” Marsh said. “This is running to the fire, but also not panicking.”

Justice said these kinds of “spikes” in infections will be dealt with as they occur, but if officials feel numbers are trending in the wrong direction or there is the possibility of infections spreading, officials are prepared to dial back some of the reopening plans or mandating additional steps to help slow the spread and keep people safe.

“We’re trying to live with something” until a vaccine for COVID-19 can be developed, he said. “Absolutely as we go forward we will have to treat those (outbreak) situations as independent. It won’t be one size fits all.”