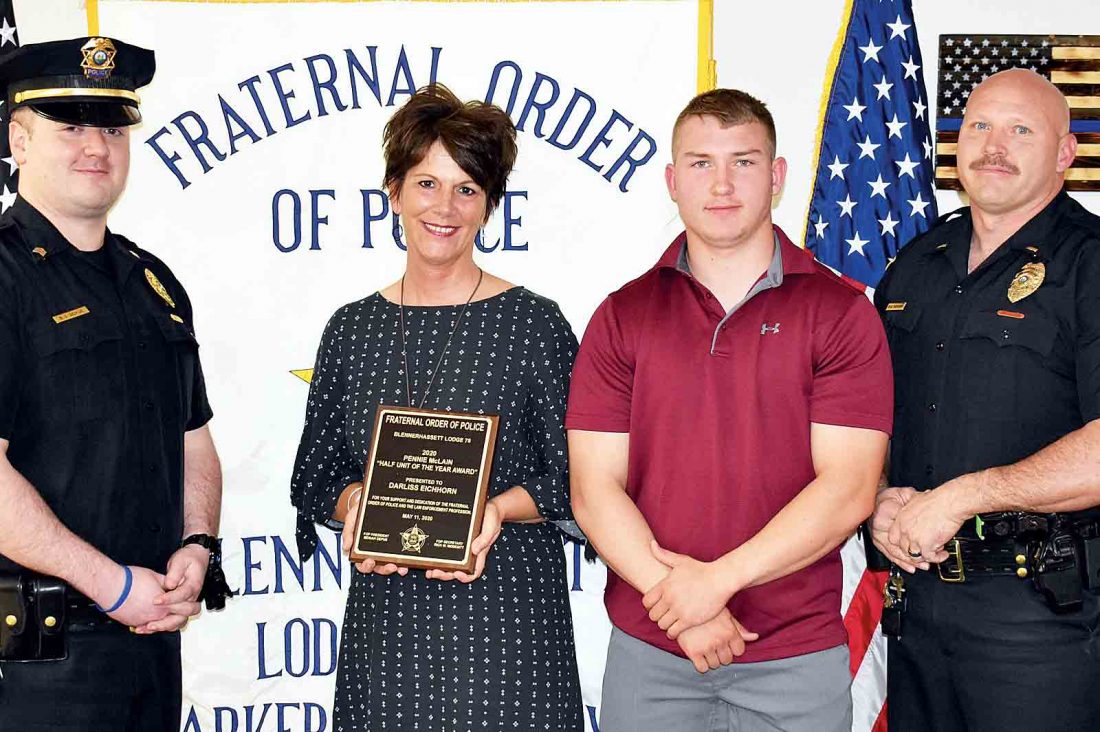 PARKERSBURG — The Pennie McLain Half Unit of the Year Award for 2020 was presented to Darliss Eichhorn by the Fraternal Order of Police Blennerhassett Lodge 79.

She is married to Parkersburg Police Lt. Matt Eichhorn and their son, Matt II, also is a police officer in Parkersburg.

The Half Unit of the Year Award is named in honor of Pennie McLain, a long-time employee of the police department and the wife of the late Police Officer Doug McLain. Mrs. McLain lived the law enforcement family life, not only as a supportive spouse, but to support or help any police officer.

“Darliss Eichhorn has earned this award through her repeated self-initialed endeavors to support and protect at-risk youth in this county. For a lot of these kids a warm coat to walk in and a bicycle to travel in is more than they’ve ever known,” Lodge 79 President Beniah Depue said. “They have Darliss to thank for that. The FOP appreciates all she does.”

Eichhorn a year ago contacted The Children’s Listening Place wanting to do something for children, Executive Director Lisa Sutton said.

“I remember the day she contacted me. It was a rainy, stormy morning and children were walking to school or waiting on the school bus in the rain,” Sutton said. “Darliss was terribly upset this particular morning. Darliss reached out to DuPont and got money donated to The Children’s Listening Place to help purchase umbrellas for kids so they would not have to walk to school, stand or walk in the rain.”

The umbrellas were given to the children and donated to other agencies for distribution, she said.

Eichhorn, because of her compassion for the children, was asked to join the board of The Children’s Listening Place.

“Darliss is dedicated to the children in our community and an asset to the board of directors at The Children’s Listening Place,” Sutton said.

In support of the Fraternal Order of Police, which didn’t have the money to hold the Policeman’s Ball, Eichhorn on her own obtained donations so the event could be held. She is presently getting donations to equip the police and fire departments with spray bottles filled with alcohol to keep officers sanitized during the virus pandemic.

Supreme Court Justice John Hutchison was supposed to be the speaker during ceremonies.

“When a police officer is married, the whole family, especially the spouse of that officer, shares a joint commitment to duty, honor and service,” Hutchison said. “Nothing exemplifies that fact better than a quote once uttered by the anonymous spouse of a police officer ‘I sleep alone, so that you can sleep safe.'”