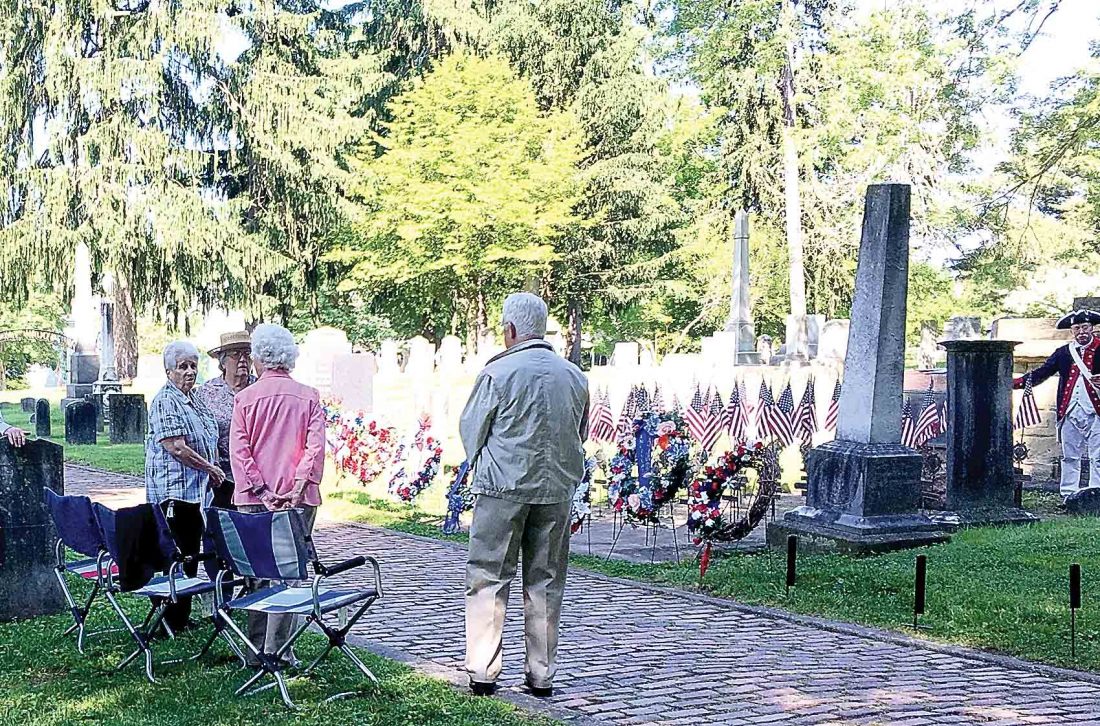 Part of the Brigade of the American Revolution’s School of Instruction will be a presentation at the Mound Cemetery, like this memorial presentation in 2018. (Photo Provided)

MARIETTA – Local residents interested in the American Revolutionary War will have a chance this weekend to learn more about the subject at the Campus Martius Museum.

The Brigade of the American Revolution will hold a School of Instruction from 9:30 a.m. to 5 p.m. Saturday at the museum.

The BAR is a living history nonprofit organization that recreates the lives of soldiers during the Revolutionary War, which lasted from 1775 to 1783.

Le Ann Hendershot, museum administrator, said programs like this are important because they create an awareness of that time period.

“It makes people more aware of the Revolutionary time,” she said. “Bill (Reynolds, museum historian) will be talking about Rufus Putnam. They’ll have speakers come in.”

She said the cost of the event is regular admission to the museum, which is $7 for adults. The school of instruction will be held in the meeting room on the museum’s main level.

Four speakers are scheduled to discuss a variety of subjects.

“I will give a very brief overview of Rufus Putnam’s role in the Revolution and the settlement of Marietta,” Reynolds said. “I’ll talk about some of the things about Putnam that people aren’t aware of. It will be followed by Wally Richardson who will talk on the British light infantry tactics, such as the striker brigades. After lunch at 1 p.m., there will be a presentation on 18th century civilian clothing, which is what women and men civilians wore in the period of the 1760s, 1770s and 1780s.”

He said Dianne Miller will give the last presentation on the role of chaplains in the Revolutionary War at the museum at 2 p.m. Manassah Cutler, a famous Marietta resident, was one of these chaplains.

Event attendees will go to the Mound Cemetery at 3 p.m. for a discussion from local historian Scott Britton on Revolutionary War figures buried at the cemetery.

“The Sons of the Revolution will talk about some of the patriots buried there, as well as their service,” said Britton, who is also the executive director of The Castle Museum. “That’s an interest level for that particular group, as we have more Revolutionary officers buried there than anywhere else in the country.”

He explained people will be stationed at different grave sites to talk about those soldiers.

Reynolds noted that the school of instruction continues on Sunday, but the events that day are more for the brigade members, although the public is welcome to attend.

At 10 a.m., Tom Morris will speak about 18th century mess kits, which include everything a soldier would need in their haversack for meals. Afterward will be a presentation on “weapons 101,” such as the proper maintenance and disassembly of weapons, especially those used by re-enactors.

“Saturday will be more interesting for the general public,” Reynolds noted.

He said these types of events have been held several times at the museum.

“They are put together by the BAR, we just provide the place for them to do it,” he said. “It’s something for them to do in the winter when they can’t get out and march and go to events. If people are interested in joining the brigade and re-enacting, this would be a good experience for them.”

According to the museum’s website, the brigade has been recreating a broad spectrum of the 18th century since 1962. Its activities include military encampments, tactical exercises, firelock shooting competitions, craft demonstrations and social activities.

* Who: Brigade of the American Revolution

* What: BAR School of Instruction

* Why: BAR is a nonprofit living history association dedicated to recreating the life and times of soldiers in the Revolutionary War