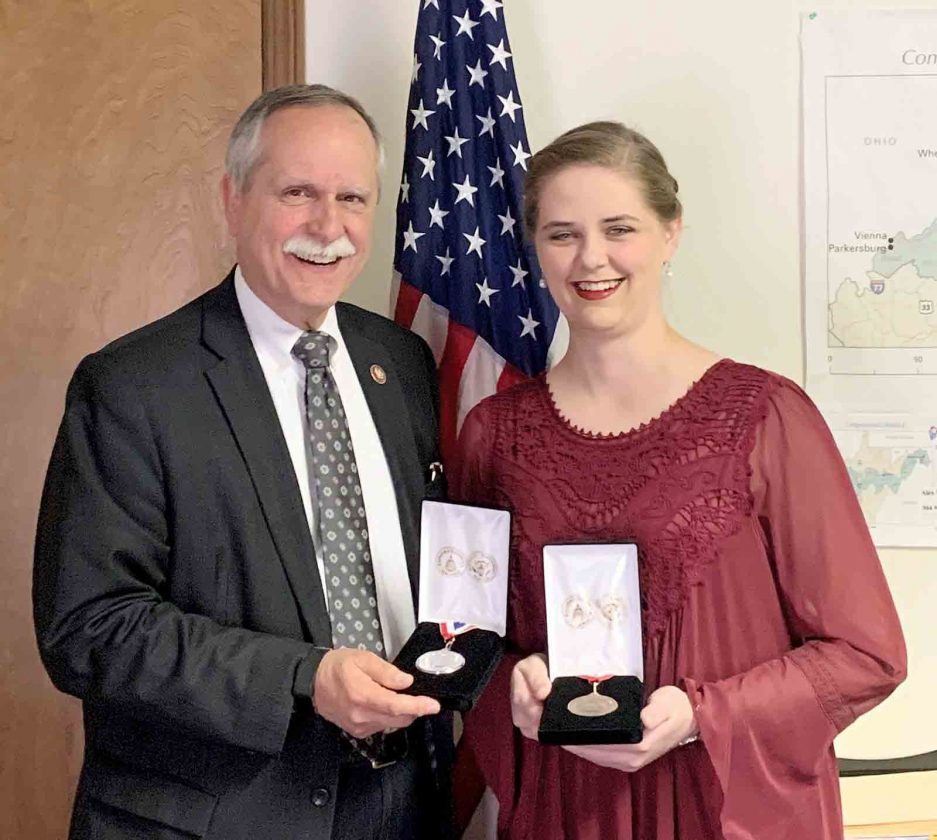 Congressman David McKinley this week presented Lauren Sexton, a homeschooled junior in Williamstown, with the Bronze and Silver Congressional Award for her community service and personal growth. (Photo Provided)

WILLIAMSTOWN — A Williamstown teen has received a Congressional Award for her community service and personal growth.

Congressman David McKinley, R- W.Va., presented Lauren Sexton with the Bronze and Silver Congressional Award this week during a visit to the Mid-Ohio Valley.

Each award represents hours of community service and projects, with bronze awarded for 200 hours and silver for 400 hours.

Sexton, 17, is a homeschooled junior who volunteers at Camden Clark Medical Center.

“It was an honor to receive these awards,” Sexton said Wednesday. “I’ve gained several skills by participating in the Congressional Award, and I’ve acquired a zeal for trying new things. I’m grateful for this wonderful experience.”

The Congressional Award is a public private partnership created by Congress to promote and recognize achievement, initiative and service in America’s youth, ages 14 to 23. The Congressional Award provides an opportunity for young people to set and achieve personally challenging goals that build character and foster community service, personal development and citizenship, according to a press release.

All young people are equally able to earn the Congressional Award, because goals are set based on individual interest, need and ability.

“A young person is not selected to receive the Congressional Award; he or she earns it,” according to a release from McKinley’s office.

Sexton said earning the Congressional Award was an ongoing project.

“I completed my Voluntary Public Service hours by volunteering at the local food pantry and by donating lap robes that I made to a local nursing home. For Personal Development, I learned new craft skills and I improved my violin playing abilities,” she said. “I completed my Physical Fitness goals by advancing my tap dancing skills and by bettering my running endurance level. For my Bronze Medal Expedition, I took a camping trip to Burr Oak State Park and learned about setting up a campsite. For my Silver Medal Exploration, I explored music origins through a trip to immersive musical experiences in Ohio and Missouri.”