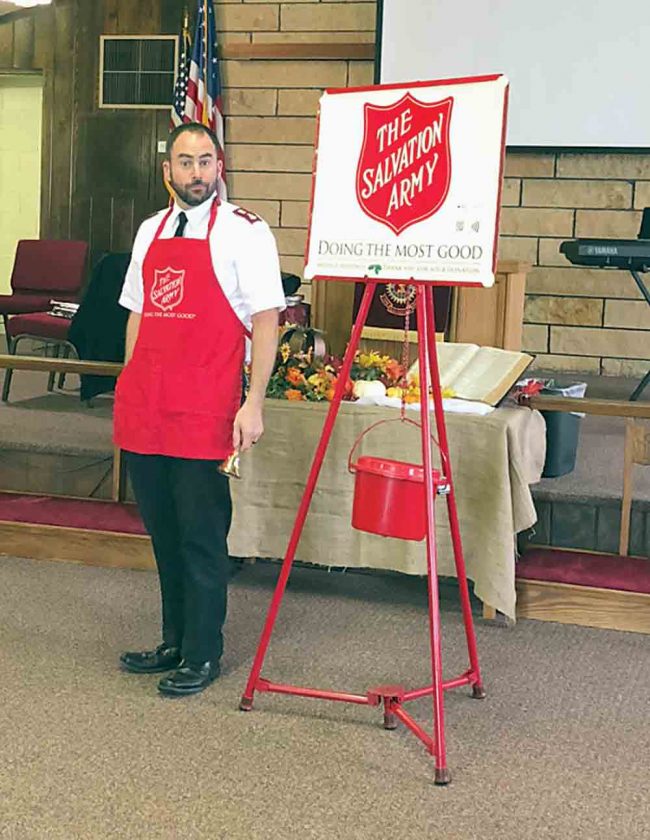 Maj. Patrick Richmond demonstrates the art of the bell ringing during a Red Kettle Campaign orientation. The 2019 Red Kettle drive kicks off on Friday with a 6 p.m. event at Grand Central Mall. (Photo Provided)

PARKERSBURG — The Salvation Army of Parkersburg’s annual Red Kettle Campaign kicks off with a ceremony Friday at the Grand Central Mall.

The 6 p.m. event will include performances by the Jackson Middle School choir and the Salvation Army brass band composed of local musicians, said Maj. Patrick Richmond, who with his wife, Carey, commands the Parkersburg office of the Salvation Army. The kickoff will be held in the parking lot by the former Sears and will move inside the mall in front of the store in the event of bad weather.

Bellringers will be at their posts beginning at 10 a.m. at locations in Parkersburg, Vienna and Ripley and will ring the bells through Dec. 24, he said.

“Every day but Sunday,” Richmond said.

The kettle campaign is the primary fundraiser for the Salvation Army, Richmond said. It supports, besides the daily operations of the Salvation Army, the agency’s emergency shelter, transitional housing, feeding programs, social services and programs for youth, he said.

“It’s imperative that we meet our goal,” he said. “If we exceed it, we can do more.”

Ringers will ring the bells from 10 a.m. to 7 p.m. at Walmart, Hobby Lobby, Piggly Wiggly, J.C. Penney and Belk at the mall, Big Lots and Kroger, Richmond said.

Paid ringers have been hired and are ready, but applications are still being accepted because of attrition as the days progress toward Christmas, he said.

Volunteer groups interested in ringing the bells can call the Salvation Army at 304-485-4529 and ask for Shirley Grogg, Richmond said.

New this year will be methods for donations to be electronically made by cellular telephone through Apple Pay or Google Pay, he said. With that, people won’t have to throw cash into the kettles, Richmond said.

Camden Clark Medical Center will begin cooking the 53 turkeys to feed the massive crowd on Monday, he said.