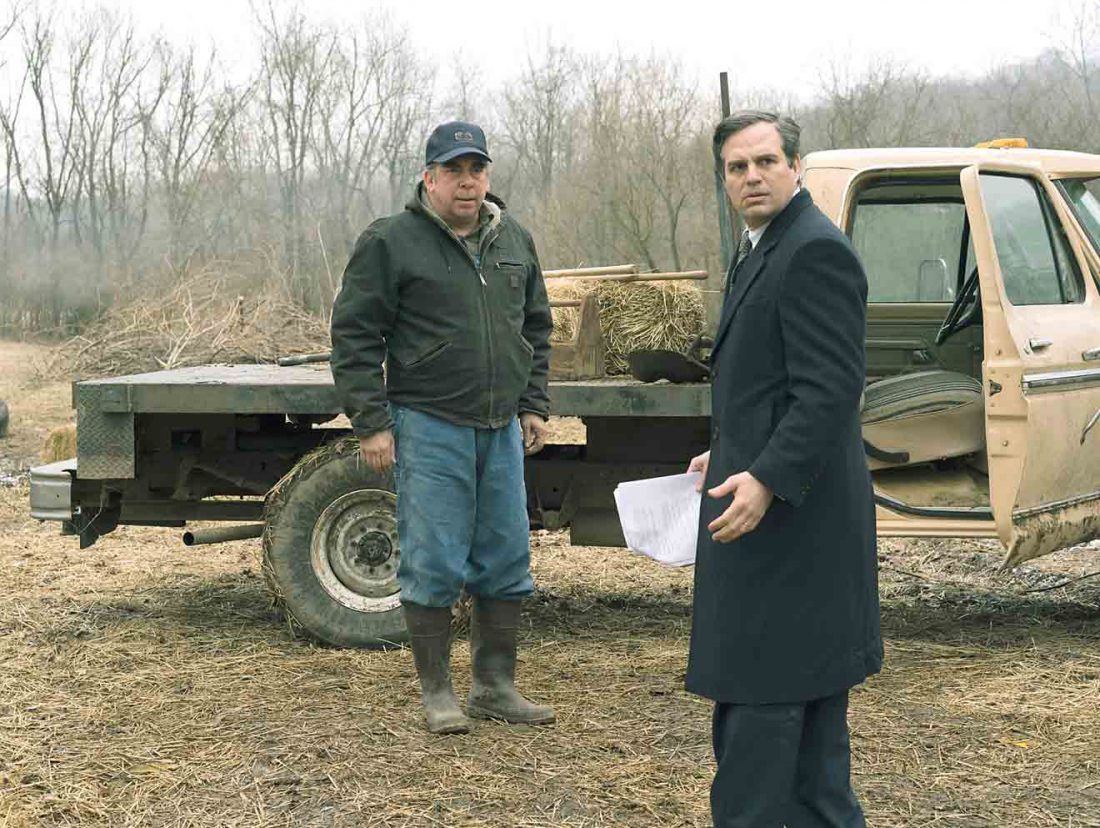 PARKERSBURG — “Dark Waters” opening today shows how people can work together to learn the truth, an attorney in the C8 lawsuit against DuPont said.

The movie begins with the relationship between attorney Rob Bilott and the late Earl Tennant, a farmer from Washington Bottom who chronicled by video the death of his cattle. Tennant’s tenacity led to the revelation that the cows were dying from drinking from a stream where the water contaminated with C8, a compound once used to make Teflon at the DuPont Washington Works Plant.

“Dark Waters” opens today across the country and will be at the Regal Cinemas at the Grand Central Mall in Vienna on Dec. 5.

C8 attorney Harry Deitzler was among those invited by the producers to a private showing two weeks ago. Deitzler filed the lawsuit against DuPont, from which the settlement led to the creation of the C8 Science Panel to study health data from about 70,000 residents in the Mid-Ohio Valley and the installation of filtration systems financed by the company in public and private water systems.

Also attending the screening in New York City was Joe Kiger of Wood County, who was affected by the C8 contamination. The movie accurately shows how DuPont, which knew what C8 does to people, hid the truth, he said.

“If you don’t have an open mind and you’re very loyal to DuPont, you’re going to be (upset),” Kiger said.

“I think the community will be pleased with it,” he said.

Kiger and his wife, Darlene, were extras in the movie and appear in a church scene walking down the aisle. He is portrayed in the movie by actor Richard Hagerman, who has appeared in “Lost in Yonkers” and “A Better Way to Die,” and Mare Winningham, who was in “St. Elmo’s Fire” and “Turner and Hooch,” plays his wife.

About 30 people were at the private screening, Kiger said. Actor Mark Ruffalo was personable, as was everyone involved in the movie, Kiger said.

DuPont issued a statement about the movie, saying safety, health and protecting the planet are core values and nothing is more important than the safety of employees and communities.

“Unfortunately, while seeking to thrill and entertain, this movie misrepresents things that happened years ago, including our history, our values and science. In some cases, the film depicts wholly imagined events,” the company said. “We have always, and will continue to, work with those in the scientific, not-for-profit and policy communities who demonstrate a serious and sincere desire to improve our health, our communities and our planet.”

The company, which does not make the chemicals, agrees further action is needed and supports federal legislation and science-based regulatory efforts to address the chemicals and has commitments around its limited use of PFAS, the per- and polyfluoroalkyl substances of which C8 and its successor, GenX, are of the same family, including eliminating the use of all PFAS-based firefighting foams at its facilities and granting royalty-free licenses to those seeking to use innovative PFAS remediation technologies, the statement said.

“‘Dark Waters’ tells how people from different backgrounds and beliefs can eventually communicate, find common ground and seek the truth together. The events spanned decades,” Deitzler said. “To condense the message into a two-hour movie, some characters were combined and many significant people are neither mentioned nor given fair credit for their contribution.”

The movie starts out with Bilott, played by Ruffalo, being contacted by Earl Tennant, played by Bill Camp, about the cows, Deitzler said. Bilott, skeptical at first, learns Tennant was right.

Deitzler is portrayed by actor Bill Pullman. Pullman played President Whitmore in the “Independence Day” movies and in “Spaceballs” with John Candy.

Besides the attorneys involved, Joe and Darlene Kiger helped organize citizens and the first meeting of clients was held in the living room of former Wood County Commissioner Bill Parrish, Deitzler said.

Bucky Bailey, whose mother while pregnant came into contact with C8 at the Washington Works, makes a cameo at the end of the movie, Deitzler said. Bailey was born with facial deformities and required more than 30 corrective surgeries.

Deitzler also said the class action settlement in 2005 would not have occurred without law partners Ed Hill and Jim Peterson. Hill and Peterson had the experience in mediation to know when to compromise instead of being hard-headed, Deitzler said.

“Without that settlement agreement and the later scientific studies, we may or may not have won the class action trial and the challenge of winning individual disease cases would have been a real battle,” he said. “DuPont would have been permitted to deny general causation in every case.”

After the settlement that created the Science Panel, Dr. Paul Brooks, retired director of physician services at Camden-Clark Memorial Hospital, and Art Maher, retired CEO of the former St. Joseph’s Hospital, organized the massive collection of health data from residents in the region. The panel found there is a probable link between C8 in the body and six human diseases.