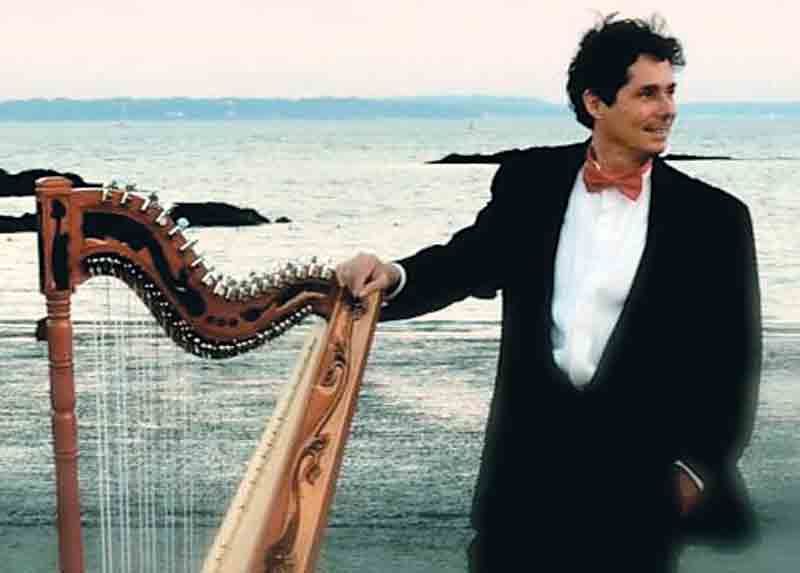 Nicolas Carter, a harpist from Paraguay, will perform at 7 p.m. Nov. 7 at the Parkersburg Art Center in downtown Parkersburg. (Photo Provided)

PARKERSBURG –The Parkersburg Art Center will be hosting a pair of events the week of Nov. 4 at Eighth and Market streets in downtown Parkersburg.

The Board of Trustees at the art center has been gathering designer purses for the annual Purse Bingo Fundraiser at 6 p.m. Nov. 4. Doors open at 5 p.m. and those attending the event can play to win 20 designer handbags.

Bingo tickets cost $20 for 20 games and can be reserved online at http://www.parkersburgartcenter.org/upcomingcurrent-events. Tables of 10 can be reserved in advance by calling 304-485-3859.

Most of the brand-new purses are donated and retail for more than $200. There are several Michael Kors, Coach, Kate Spade purses along with other beautiful bags. There will also be silent auction gift baskets, food, door prizes throughout the night, a 50/50 drawing and a raffle.

With the purchase of one raffle ticket, there are two chances to win. You could either be awarded any purse of your choice or a prize package that includes a Michael Kors Bag, Ted Baker clutch, Apple Watch, Kate Spade band, and Apple Earpods. Raffle tickets are available at the event.

“We’re really anticipating a sell-out crowd,” said Lynn McCormick, PAC Board of Trustees Chair and head of the Bingo Committee. “We’re encouraging people to get their tickets now.

“Our fundraisers help to keep our doors open and provide outreach programs to the community,” she said. “This event is just a whole lot of fun for everyone. We keep the evening moving. There will be lots of laughs.”

For more information about Purse Bingo, visit the art center’s Facebook events page or their website at parkersburgartcenter.org/upcomingcurrent-events or call 304-485-3859. The Parkersburg Art Center is located at 725 Market Street in downtown Parkersburg at the corner of Market and Eighth Streets.

On Nov. 7, Paraguayan harpist Nicolas Carter will perform at 7 p.m. at the art center. Doors open at 6:30 p.m.

Donations will be taken at the door and proceeds shared between the performer and the art center. The anticipated length of the program is about one hour.

A professional musician and educator, Carter learned the harp while growing up in Paraguay, a country with a distinguished tradition of harp music. Born in Minnesota, his missionary parents took him to South America when he was 6 months old. He grew up there, then returned to Minnesota for college completely bilingual in Spanish and English,

In Paraguay, Carter began performing on the harp at an early age. He learned in the traditional folk manner, by ear, stressing strong improvisational skills and finger techniques. His teacher was Isidro Caballero, a master musician who had traveled all over the world and was famous in Paraguay.

In early adulthood, Carter spent a year in Europe, performing in concert halls and for tips on the streets. He has developed a repertoire of original music, blending textures of Latin American music with influences of world contemporary music.

Carter holds a Master of Fine Arts degree in theater directing from the University of Minnesota and has been a Fulbright scholar in France and Uruguay. He returned to Paraguay in 1989, where he was a theater professor and director at the Catholic University in Asuncion. That was a period of historic change from dictatorship to democracy. He collaborated with his students to write and produce drama based on their collective life experiences. Their play, “La Cabeza,” won the prestigious Cartelera Award for Best Play of the Year.

In Minneapolis, Carter was the Spanish teacher for the City of Lakes Waldorf School for several years. During that time, he offered dozens of presentations, workshops, and residencies for students grades K-12.

In 2013 he received a Fulbright Scholar award to work with Uruguayan educators in Montevideo, Uruguay. During 2015 and 2016 Carter worked promoting innovative theater programs in schools in Montevideo and Colonia, Uruguay.

Carter’s Parkersburg performance is hosted by the art center.

“We have welcomed other harpists traveling through this area in the past couple of years. The music is just so magical. We are so pleased that Nicholas reached out to us,” said Jessie Siefert, Managing Director for the art center.

The Parkersburg appearance of Carter reflects the mission of Harping for Harmony Foundation, to promote harmony and community, locally and globally through harp music.

Wayne Towner can be reached at wtowner@newsandsentinel.com