File Photo Cannons were fired by members of Carlin’s Battery D during last year’s Memorial Day service at Sunset Memorial Funeral Home and Memory Gardens in Parkersburg. This year’s service will be 11 a.m. May 25. 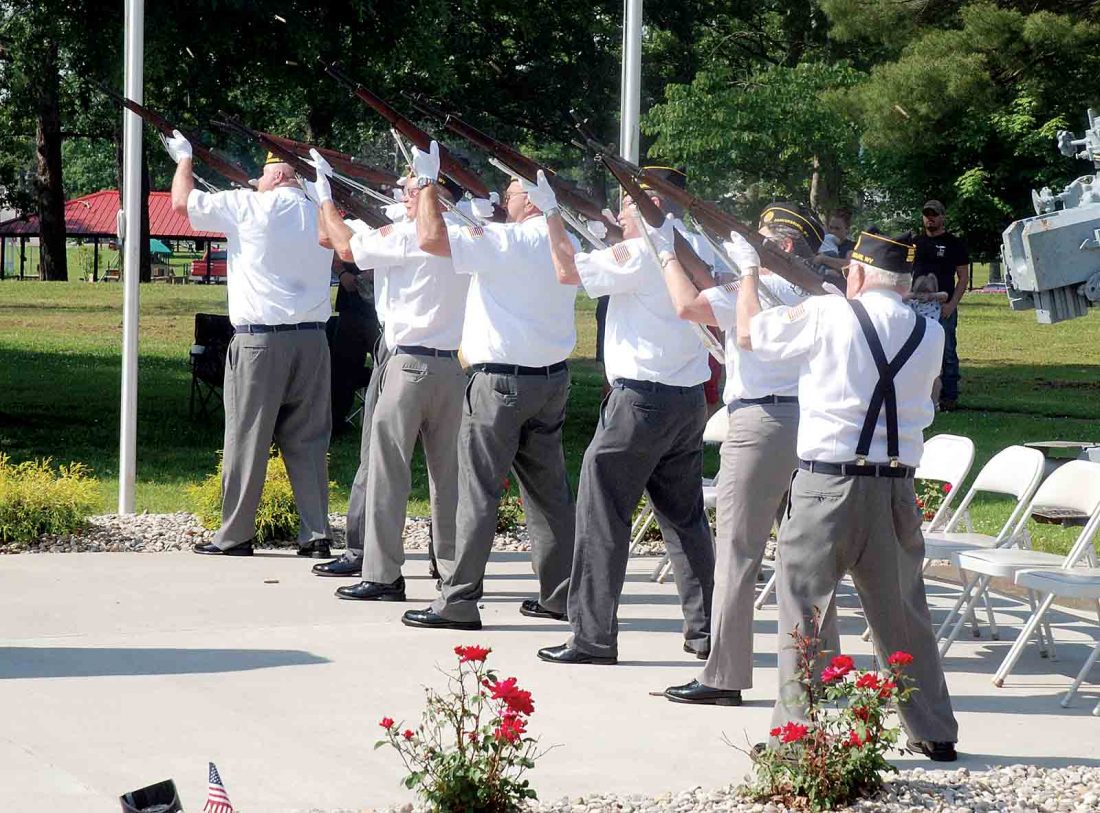 PARKERSBURG — Communities in the Mid-Ohio Valley will be celebrating Memorial Day with parades and ceremonies during the Memorial Day holiday weekend.

* On May 25, the 63rd annual Memorial Ceremony at Sunset Memory Gardens on West Virginia 95 in south Parkersburg will begin at 11 a.m. in the cemetery’s new garden, The Garden of Allegiance and Honor.

Along with a ribbon cutting for the new veterans garden, this year’s guest speaker is West Virginia Agricultural Commissioner Kent Leonhardt. The program will feature patriotic music, a flag raising, wreath laying, a rifle salute and “Taps,” among other activities featuring representatives from various veterans organizations and Sunset. There will also be a roll call of deceased veterans between Memorial Day 2018 and Memorial Day 2019. 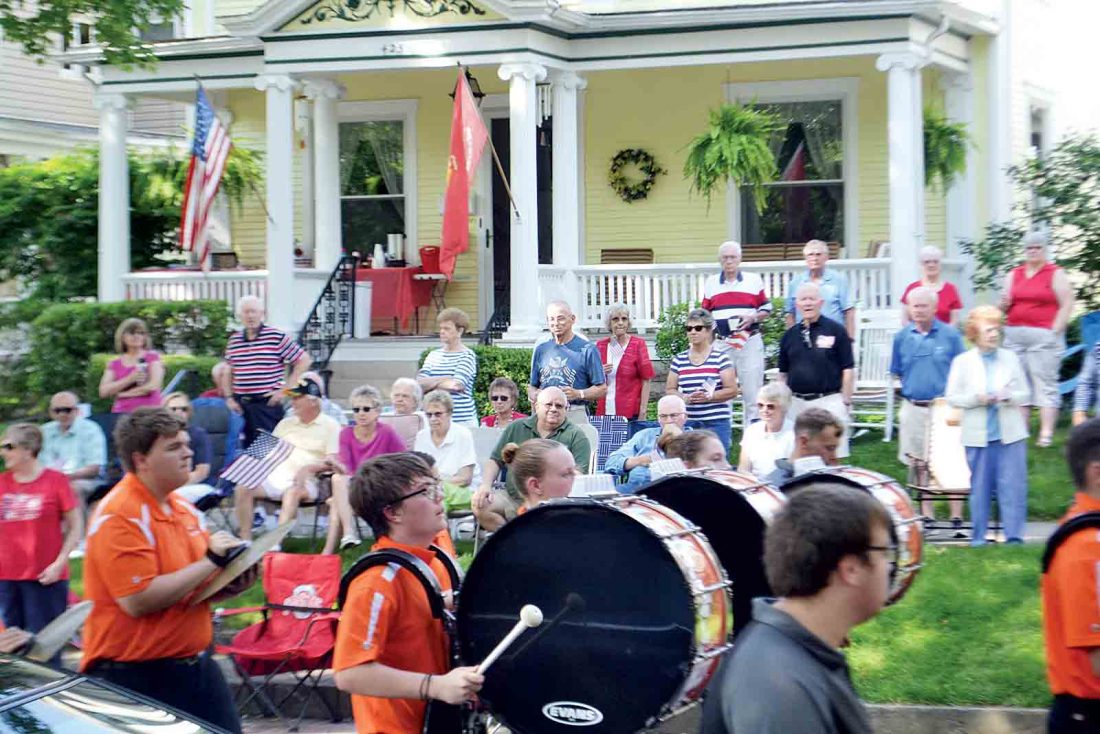 * Also on May 25, the Spring Grove Cemetery Association will hold its annual Memorial Day program at 3 p.m. at Logan Memorial United Methodist Church at Sixth and Ann streets in Parkersburg.

The program is open to the public and the guest speaker will be Stanley Mark Bannister Jr., a 1981 graduate of Parkersburg High School, a 20-year veteran and director of operations for Georgia Department of Veterans Service Center in Atlanta, Ga.

* On May 27, American Legion Post 15 will begin its day with the posting of the colors at 8 a.m. at the post headquarters at 2505 Ohio Ave. in the traffic circle.

A full Memorial Day service will be at 10 a.m. at City Park with posting of the colors, speakers, “Taps,” a rifle salute and the laying of a wreath. The names of area veterans who have died since the last Memorial Day will be read.

* The Veterans Museum of the Mid-Ohio Valley will hold its annual Memorial Day Cookout at the large shelter next to the City Park Pond from noon-3 p.m. May 26. The museum, located at 1829 Seventh St., Parkersburg, will not be open for Memorial Day, officials said. The museum’s current hours are 11 a.m.-4 p.m. Wednesday through Friday.

File Photo Cannons were fired by members of Carlin’s Battery D during last year’s Memorial Day service at Sunset Memorial Funeral Home and Memory Gardens in Parkersburg. This year’s service will be 11 a.m. May 25.

Two Memorial Day services will be held in Ravenswood on May 26 in honor and remembrance of those who have died.

* The first ceremony is set to begin at 1 p.m. May 26 at Riverfront Park in Ravenswood and is sponsored by the Auxiliary of the Veterans of Foreign Wars Post 6669. The ceremony, which was originally started by a group called the Navy Mothers, is held each year to honor the Navy dead.

The ceremony will include the advancement of the colors, a rendition of “The Star Spangled Banner,” speakers, the National Anthem and a rifle salute. To conclude the ceremony, auxiliary members will lay flowers on the water in honor of the Navy dead.

* The second ceremony will be 2 p.m. May 26 at Ravenswood Cemetery. It will feature speakers and county and city officials along with representatives from law enforcement agencies and local veterans groups as special guests at the ceremony.

In Marietta, the Veterans of Foreign Wars and the American Legion will be sponsoring parades on May 27 to honor the military veterans who have died in service. Each parade will feature local high school bands, local veterans groups and community organizations and local politicians. A memorial service, with rifle salutes and other honors, will be given at the end of each event.

* VFW Post 5108 will hold the first program beginning at Harmar Elementary School. After lining up at 7:30 a.m., the parade will start at 8 a.m. May 27 from the school and end at Harmar Cemetery, where a 20-minute program will be held in honor of fallen soldiers.

From the cemetery, the crowd will walk to the Putnam Street Bridge.

Another rifle salute will be given for fallen Marine and Navy personnel lost at sea and a flower wreath will be thrown into the Muskingum River.

* The parade organized by American Legion Post 64 will begin lining up at 9 a.m. May 27 on Front Street next to East Muskingum Park. The parade will start at 10 a.m. and follow a route along Front Street, Putnam Street, Fifth Street, Wooster Street and Eighth Street.

During the parade, the units will stop at Mound Cemetery for a brief ceremony.

The final stop will be a ceremony in Oak Grove Cemetery at Eighth and Wooster streets to commemorate those who have passed since the last Memorial Day. There will be a speaker and during the program the names of soldiers who have died since Memorial Day 2018 will be read aloud.

The program will include a rifle salute and the reading of the Gettysburg Address and General Logan’s orders, which were given during the Civil War and proclaimed Memorial Day.

There will be a flag retirement ceremony at AL Post 64 Home, also at Eighth and Wooster streets, following the ceremony. Anyone with old or worn American flags can bring them to the post for proper disposal. There is a mailbox in the post’s lower parking lot where flags can be left at any time during the year.

Lunch will be served at the post following the ceremony and the flag retirement ceremony. VFW Post 5108 will also hold a luncheon following the parades at its location on Pike Street.

* In Williamstown, American Legion Post 159 will hold a parade from Tomlinson Park to Riverview Cemetery on May 27 at 9 a.m. A ceremony honoring deceased veterans will be held at the cemetery with speakers. There will also be a wreath-laying, a rifle salute and “Taps.”

Following the memorial ceremony, everyone is invited to return to the post building on Central Avenue to honor recently deceased post members and for a flag disposal ceremony. Following all ceremonies, a lunch and open house will be held for everyone in attendance.

* In Belpre, the annual Memorial Day program will be 11 a.m. May 27 at Leavitt Funeral Home in Belpre, at the flagpole and veterans memorial dedicated in 2007 by the funeral home to veterans who have received services there.

The event is organized by Leavitt Funeral Home and the Belpre Veterans Association and will focus this year on four Vietnam veterans from Washington County who served and died in Vietnam. The program will feature speakers, a rifle salute and the laying of a wreath and the playing of “Taps” during the ceremony. Light refreshments will be served at the funeral home.

* In Beverly and Waterford, the annual Memorial Day Parade sponsored by American Legion Post 389 will begin at 9 a.m. May 27 at Fort Frye High School with the lineup beginning at 8:30 a.m. Following a brief ceremony at the veterans memorial near the high school, the parade will go along Ohio 60 to the Beverly Cemetery where a memorial ceremony will be held for the veterans buried in the cemetery.

The parade will then move toward Waterford on the other side of the Muskingum River. The parade units will stop for a few minutes on the Beverly-Waterford Bridge while a wreathe and flowers are thrown in the river to honor naval veterans. The parade will end at the Waterford Cemetery with another ceremony for veterans.

A guest speaker from the American Legion will be featured at both cemetery services. Following the parade, participants are encouraged to join American Legion Post 389 in Beverly for breakfast.

* In Lowell, American Legion Post 750 will hold its annual Lowell Memorial Parade at 10 a.m. May 27 at the Lowell-Adams Volunteer Fire Department. The parade will include visits to the Lowell Veterans Monument, the German Cemetery, Cats Creek Bridge and Greenlawn Cemetery where ceremonies will be held.

* On May 25, Post 750 also participates in a Memorial Day Service at 1 p.m. at East Lawn Memorial Park on Ohio 7 north of Marietta..

There will be the posting of the colors, the national anthem, a rifle ceremony, wreath laying and other activities.