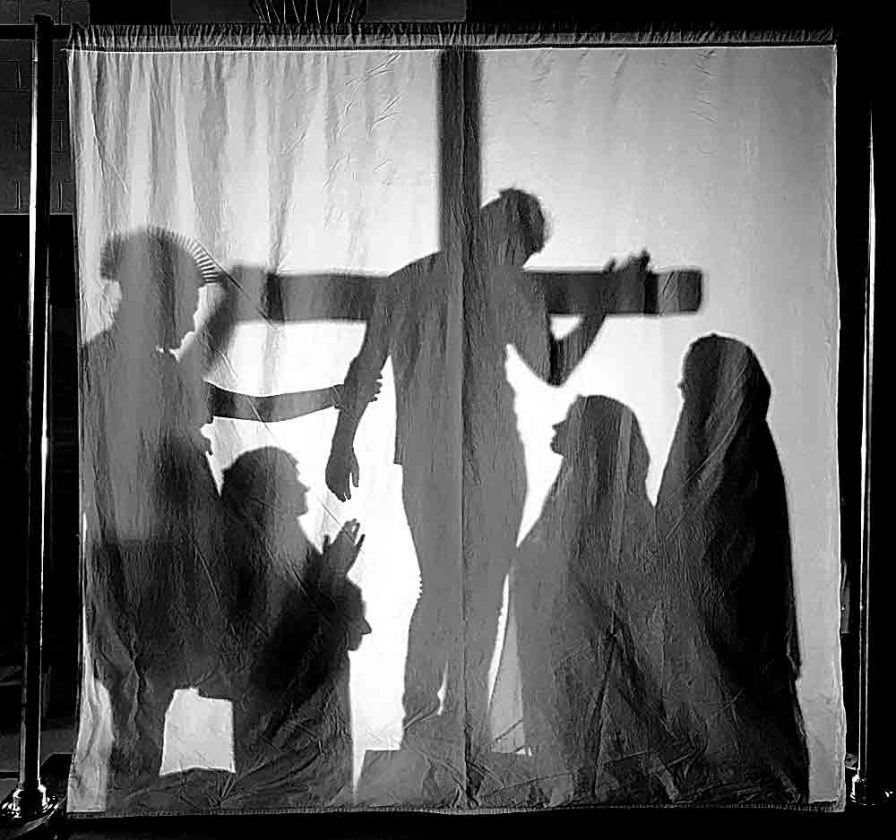 Photo Provided The Shadow Passion is performed behind a screen and backlighting renders each scene in the performance as a silhouette. The “Shadow Passion” will be presented at St. Margaret Mary Catholic Church in Parkersburg Monday.

PARKERSBURG — The story of Christ’s crucifixion and resurrection will be presented through images and song during the “Shadow Passion” at St. Margaret Mary Catholic Church at 2500 Dudley Ave. at 7 p.m. Monday.

A light Lenten dinner consisting of bread and 10 soups will be served prior at the parish hall behind the church between 5:30 and 7 p.m.

The Stations of the Cross has for centuries remained a Christian tradition.

In other lands, other towns, Christians wanting to travel the path Jesus walked from his sentencing to die on a cross at Mount Calvary could do so in their own towns by viewing pictures of the various events (or stations) along the way and praying as they traveled.

In Monday’s production, silhouettes for each ‘station’ along with a musical rendering and prayers will be presented.

The “Shadow Passion” is a production where each Station of the Cross is enacted behind a screen with a strong backlight shining on the players. This produces a black silhouette depicting that scene, said Catherine Wharton, one of the production’s organizers.

Wharton continued, “Usually this is done without music, but this time we will have the choir singing the original music composed by Mark Scarpelli Eric Hall, and Dan Kehde.”

The seven churches joining to bring this presentation together are St. Margaret Mary and St. Francis Xavier in Parkersburg, St. Monica in Lubeck, St. Michael in Vienna, St. John in St. Marys, Christ the King of Dunbar and St. Anthony of Charleston.

“This is a wonderful opportunity during the Lenten season to experience a spiritual moment that will enliven your faith. I like to call them God Winks,” said the Rev. John Gallagher, pastor of St. Michael Church in Vienna.

One of the three composers, Mark Scarpelli, attended three two hour sessions from Charleston to direct the chorus.

He said, “Music is an incredibly strong emotional language. When I write, I attempt to focus within, for I believe music to be an expression that comes from the heart.”

“The Shadow Passion brings to closure our Lenten series,” said Jerry Showalter, a deacon at St. Margaret Mary Church. “Through the medium of stark images and powerful music the reality of humanity is expressed. The Shadow Passion is a must for anyone following Jesus.”

“My prayer is that those participating and attending the Shadow Passion may be blessed as abundantly as I have been in helping bring this presentation to our area,” said Wharton.