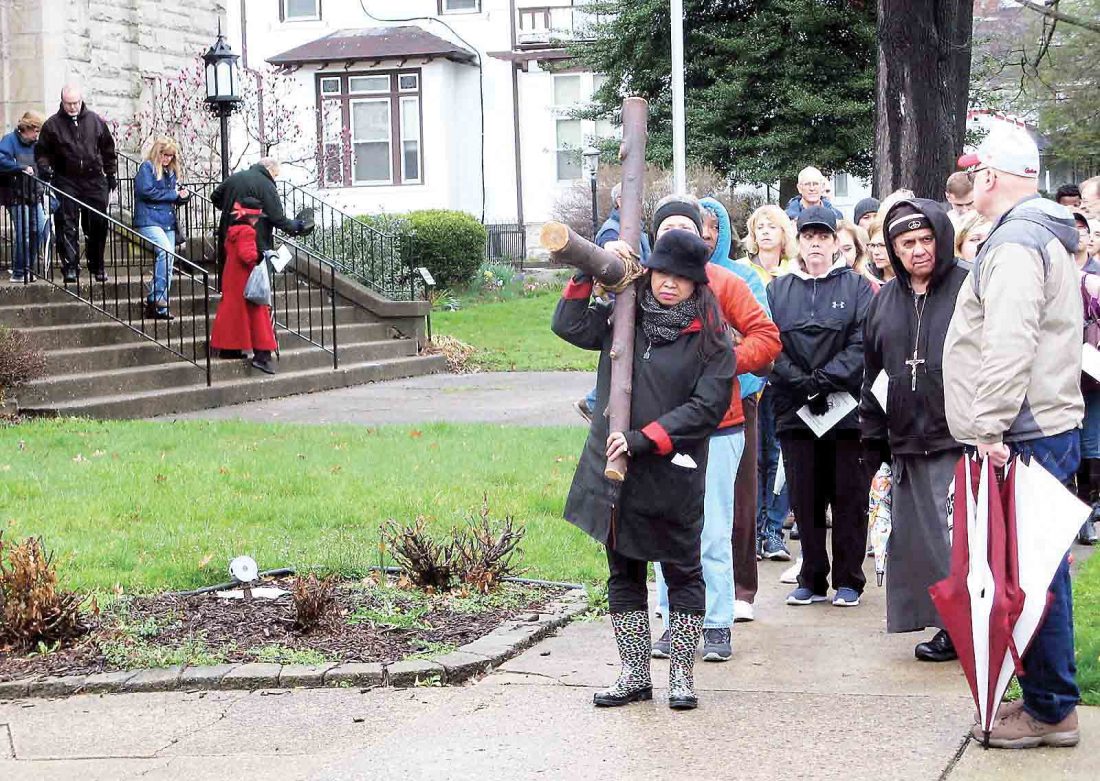 Marlene Dent of Parkersburg carries the cross during the 2018 Stations of The Cross Good Friday walk in 2018. This year’s walk will be held on April 19. (File Photo)

The Stations of the Cross joins people of different faiths worshipping together at several downtown churches and depicts 14 scenes from the walk of Jesus to Calvary and His crucifixion. At each station, there are scripture readings and interactive prayers.

While Stations of the Cross are prayed throughout the year, it is especially meaningful on Good Friday, which marks the death of Jesus.

The walk begins with praying at St. Francis Xavier. From there, a large rustic cross is carried to the next church.

Hosting churches enjoy having new people visit their churches. The pilgrims on the walk enjoy the churches, meeting new friends and honoring the solemn occasion.

St. Francis Xavier was established in 1853 with the current building completed in 1869. The Rev. John Rice is its priest.

St. Francis Xavier serves as the site for the Gabriel Project, a community outreach ministry to needy expectant and new mothers, as well as Stone Soup Kitchen that serves a community luncheon each Wednesday.

First Baptist Church was formed in 1811 and first occupied in 1876. The Rev. Dr. Richard McClure pastors First Baptist. McClure and his congregation have participated in every walk since its inception.

First Baptist serves as a ministry partner in the community for McKinley School, Habitat for Humanity, The Way Community Center, and Narcotics Anonymous.

Trinity assists in the community with a Monday lunch program open to the public, a food closet and utility assistance to those in need.

Logan Memorial Methodist Church was Parkersburg’s first African-American faith community and was constructed in 1892. Logan Memorial has been serving the community for over 150 years.

First United Methodist Church established itself in 1799 and its current building was erected in 1911. Richard DeQuaisie is pastor of the congregation.

First United Church has touched hundreds in the community with its prayer blanket ministry, presenting embroidered blankets to those with illness or facing surgery.

St. Patrick’s Priory Anglican Church is the most recently established downtown church. It occupies a late 1800s building, which the church has been renovating.

St. Patrick’s is a sacramental congregation and practices a Celtic spiritual tradition.

The Salvation Amy has served the Parkersburg area for many years and has been at its Fifth Street location since 1962. The Salvation Army is pastored by Majs. Matt and Cathy Riley, who have been on post since June 2016.

The Salvation Army in Parkersburg is best known for its Red Kettle event, an outreach effort at Christmas that provides Christmas to the less fortunate.

This year’s goal is to have 20 churches represented. There will be a sign in at the first church to indicate which church the participant represents.

Participants who would like a small sign bearing the name of their church should private message Sherry Hornbeck West on Facebook with the church name. She will provide the sign the day of the event.

The hosting churches also invite everyone to begin the Easter weekend by celebrating the season with their brothers and sisters of different faiths.