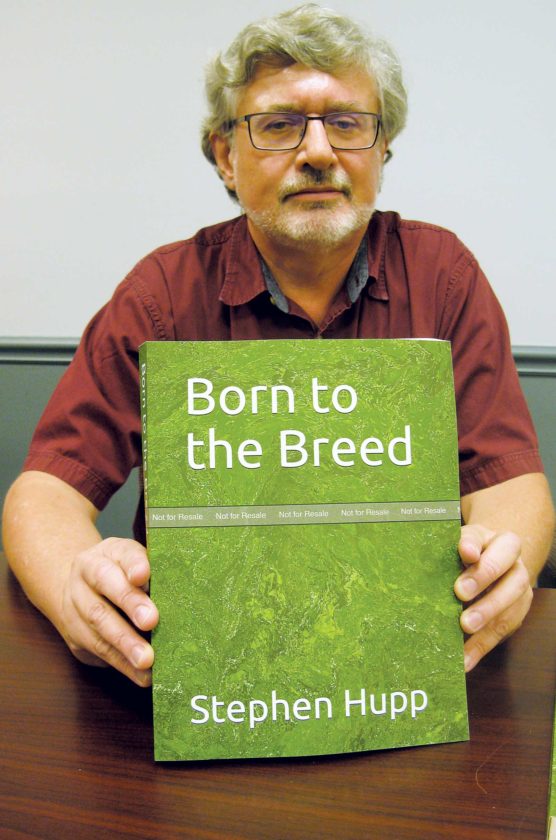 Photo by Jess Mancini Stephen Hupp, library director at West Virginia University at Parkersburg, has published his third book, “Born to the Breed,” about a woman in a famous racing family.

PARKERSBURG — A Parkersburg man who is a fan of NASCAR has written a book set in the racing world.

“Born to the Breed” is the fictional story of Marty Dodd, a fourth-generation member of a successful racing family, said Stephen Hupp.

The subject matter is a departure from the genre of the first two books he’s written, “Daughter of the Valley” followed by “Of God’s and Spirits,” both published in 2017.

NASCAR is a passion, according to Hupp, a librarian at West Virginia University at Parkersburg.

“The book is just a natural fit,” he said.

In “Born to the Breed,” Dodd has all the talent of her famous grandfather, but her parents Doug and Andrea want her to pursue a career outside of racing. Entirely fiction with no intended resemblance to anyone, including female race car drivers, the book tells Dodd’s story of rising through the racing ranks, Hupp said.

“I just wanted to tell what I think was an interesting story,” Hupp said.

“Born to the Breed,” self-published through amazon.com, is available on amazon.com in print and for Kindle.

Hupp is the library director at WVU-Parkersburg.

“Daughter of the Valley” and “Of Gods and Spirits” also are available from Amazon.

“Daughter of the Valley” is about the haunting of Collinsburg in the Ohio Valley by the spirit of Virginia Llewellyn.

The vile subject of an infamous folk take, Virginia meets Dr. Kat Tiffin, a history professor at Collinsburg College, to convince her the folk tale is untrue.

Tiffin, aided by two students, investigates, but unaware the spirit’s motive involves its plans for a descendant, the head of a notorious mining company who will visit Collinsburg.

“Of Gods and Spirits” tells the story of a warlock, a Lakota Sioux holy man and a voodoo priestess with magical powers. They are unaware of each other until holy objects are stolen from them on the same evening and they join together to recover the objects.

Kat Tiffin will return in 2019 in Hupp’s next book, which will be about the legend of the Mothman. The Mothman has much local interest that could generate interest for the book, he said.