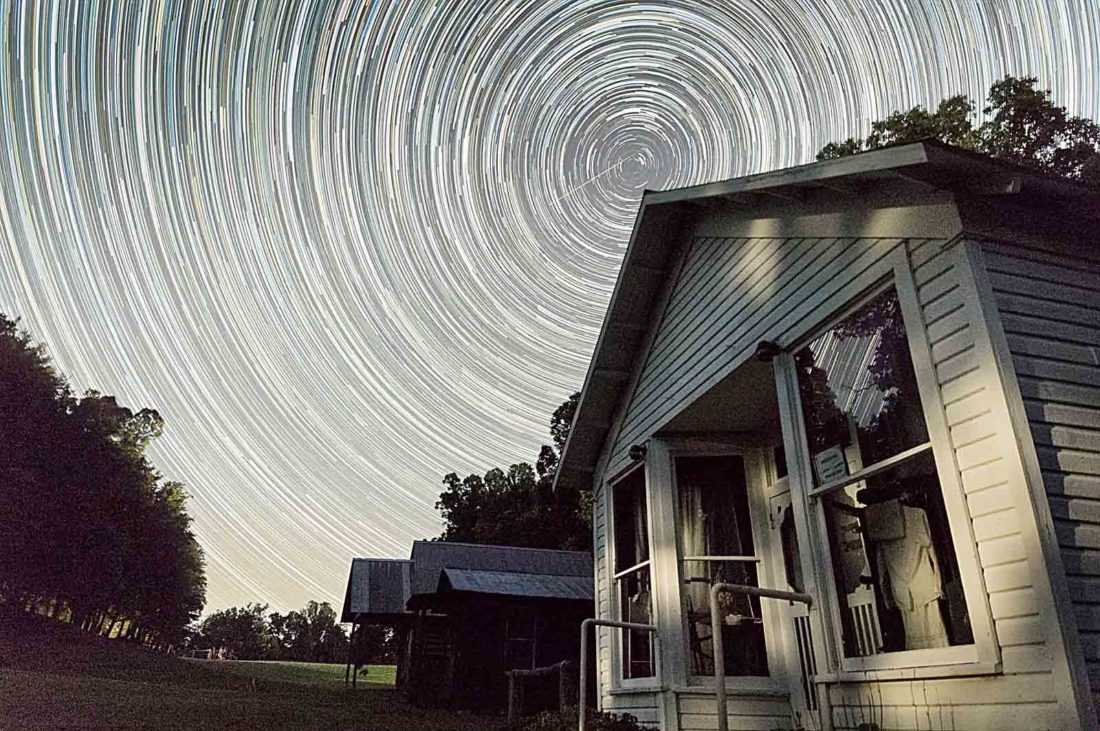 Photo by Jesse Thornton, provided by Mid-Ohio Valley Regional Council A time-lapse image of the night sky is shown over the Calhoun Historic Village in Calhoun Park. The park will welcome astronomers for a stargazing event this weekend that takes advantage of the dark skies in the area.

GRANTSVILLE — Calhoun County isn’t afraid of the dark. In fact, local officials are embracing it as a tool for economic development.

Without the bright lights of an urban setting, Calhoun Park off West Virginia 16 outside of Grantsville has one of the darkest night skies in the eastern United States. That makes it an ideal place to observe the movements of the celestial bodies in the Milky Way.

People will gather to do just that this weekend for the fourth annual Calhoun Stargaze.

“One thing we do have in Calhoun County, it’s dark,” County Commission President Chip Westfall said.

When he attended last fall’s event, Westfall estimated there were at least 30 stargazers in attendance.

“These people came from all over the place,” he said.

Local government and development officials and partners from Fairmont State University and the University of Tennessee are working to bring even more, from dedicated astronomers to families looking for an enjoyable camping trip.

Luke Peters, project coordinator with the Mid-Ohio Valley Regional Council, said one of the biggest needs is for a modern bath house facility with restrooms and showers.

“Because ultimately, one of the revenue sources for the park would be overnight guests,” he said.

The Calhoun County Commission and park board contracted with GAI Consultants Inc. of Charleston to do a preliminary design for the facility. Phase I, which will include showers, restrooms, additional RV hookups and an expanded camping area, is expected to cost $300,000, Peters said.

The Regional Council has applied for a $240,000 grant through the Appalachian Regional Commission for the project. The $60,000 local share would be covered by $15,000 from the Dominion Foundation, a $7,500 grant from the Parkersburg Area Community Foundation, funds from the West Virginia Development Office and the County Commission and, hopefully, donations from local businesses, Peters said.

The decision on the ARC grant should be announced this fall, he said.

The hope is to continue expanding the park with grant funds and use the revenue it generates to cover maintenance and a superintendent, Peters said. Most maintenance and improvements now are overseen by volunteers with very little money from the county, Westfall said.

Future plans include adding additional camping options, including yurts or mini cabins, which could be built by local career and technical students, Peters said. There’s enough space to be developed for both serious astronomers and casual vacationers, he said. The Calhoun Historic Village is located within it, and volunteers could offer “sky tours.”

A night-sky green laser tour is one of the events on tap for this weekend, which a release from the University of Tennessee said “will give local residents the chance to interact with astronomers and see planets and stars through world-class telescopes.”